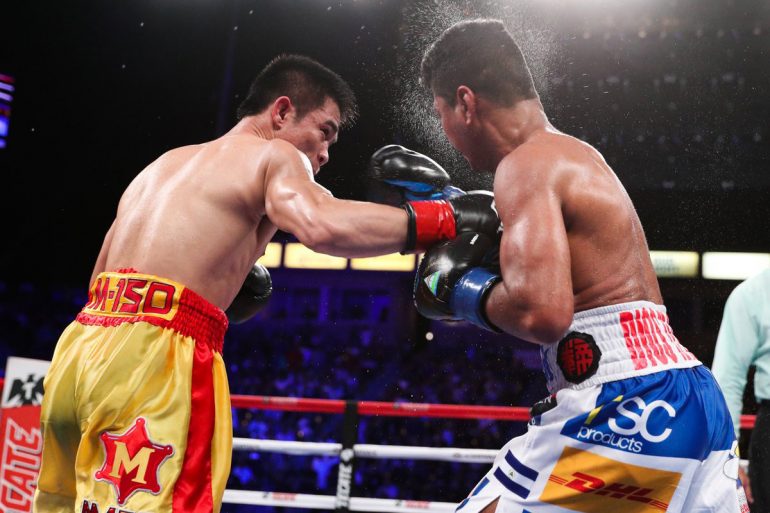 CARSON, Calif. — It was a sight that was hard to believe.

After 46 bouts of brilliance, Roman Gonzalez was out, flat on his back, staring up at the lights.

His girlfriend, Sofia, quickly ran from the crowd at StubHub Center in horror.

It was all over. Not just his status as one of the five best pound-for-pound fighters in the world. But in all likelihood, his relevancy as a top boxer at all.

Wisaskil Wangek topped “Chocolatito” in March, but that was via controversial decision. This time, the Thai fighter left no doubt with a pair of knockdowns in Round 4 on Saturday, the last of which finished the fight in brutal fashion at 1:18.

Wangek, also known as Srisaket Sor Rungvisai, didn’t just retain his WBC junior bantamweight title in the HBO main event with his pulverizing right hooks. He proved that maybe he should be considered one of the best pound-for-pound boxers on the planet.

“I trained two months for the first fight. I trained four months for this one,” said Wangek (44-4-1, 40 knockouts), who is now mandated to face Juan Francisco Estrada, who won a WBC title-elimination bout against Carlos Cuadras on the undercard. “I knew I was going to knock him out.” 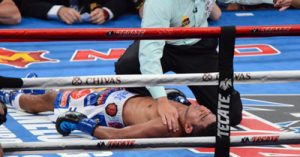 Gonzalez (46-2, 38 KOs) finally came to his senses and quickly exited the arena, too, a beaten man. Sure, he lost his perfect record in March, but he did so with the comforting knowledge that most fans and media members believed he won. This time?

“We were both trading punches,” Gonzalez said. “His were a little bit harder and they caught me. I was little hurt on the second knockdown, but I’m OK now. I congratulate the champ.”

That’s the reality Gonzalez now faces, one where he isn’t the champ, a designation he carried proudly for more than nine years. The Nicaraguan’s hero, fellow countryman and hall of famer Alexis Arguello, never competed for a world title again after suffering a second loss to rival Aaron Pryor inside the distance in 1983.

Will Gonzalez ever return to prominence? Or does Wangek simply possesses the elixir to solve a fighter who will go down in the annals of boxing lore as one of it’s all-time great little guys?

“I think it’s just a bad style matchup for Chocolatito,” Gonzalez’s American promoter, K2’s Tom Loeffler, told RingTV.com. “We’ll have to see what his team would like to do (regarding his future). I think it could be a situation where Chocolatito could beat every fighter in the division except Sor Rungvisai.”

Perhaps that will prove true, but make no mistake: Gonzalez isn’t the same fighter he once was.

At 30 years old, he’s now fighting 10 pounds above the weight he captured his first title in. His power? Not nearly as effective. And even in victories over fighters like Carlos Cuadras and Brian Viloria, Gonzalez absorbed a lot of punishment during those taxing affairs.

The second meeting with Wangek was shaping up to be another one. In fact, it was brutal until Wangek suddenly put an end to the festivities with his second devastating right hook on the jaw.

The former four-division champion bravely rose from the canvas after Wangek planted him there with the first right hook. But even to that point, Wangek had invested to the body early with plenty of thunderous right hooks and clearly won the first three rounds.

How long could Gonzalez withstand those kind of shots to the midsection while still conserving energy down the stretch? We never found out.

Gonzalez also was spared all the cuts and bruises he suffered from head collisions.

Head butts and lots of ’em dominated the first bout. The rematch wasn’t even one round in when Wangek’s noggin collided with Gonzalez again, and he immediately pleaded with referee Tom Taylor to intervene. Rungvisai, a southpaw, was always going to make for clashes of heads with an orthodox fighter, but Gonzalez insisted then that the Thai fighter was leading with his head.

Many observers believed all the blood smeared across Gonzalez’s face was a big impression to judges, who surprisingly saw the fight for Wangek.

It didn’t matter this time. That first head butt was the last. And there would be no doubt who the better man was.

Wangek began his career 1-3-1 when he had a moment of clarity: he could one day become an elite fighter, if only he dedicated himself completely. He did so while working as a trash collector in Bangkok, sometimes grabbing scraps for meals. Now, at age 30, the dream is reality. It’s time to give Wangek his due as one of the best in the world regardless of weight.

“People say when you become a champion you elevate your game,” Loeffler said. “And that’s exactly what he did tonight. When you can beat the No. 1 pound-for-pound fighter twice, you have to consider him at the top of the sport.”

But Gonzalez? He’s headed in a much different direction, if we indeed ever see him again at all. But what a ride it was.