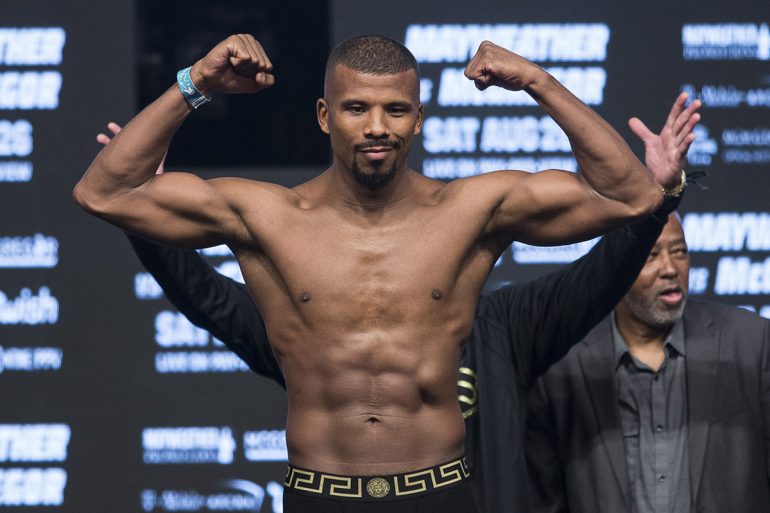 LAS VEGAS — Badou Jack developed into a force at 168 pounds, and it looks like he might even better one weight class north.

The Swede made his 175-pound debut Saturday with a five-round battering of former light heavyweight champion Nathan Cleverly on the Mayweather-McGregor undercard.

Cleverly threw nary a punch and instead ducked, dodged and weaved with his back along the ropes as Jack continued to pound him with thunderous body shots and right crosses over Rounds 4 and 5.

The Welshman’s right eye was a bloody mess, and with no answer for any of Jack’s combinations, referee Tony Weeks finally halted the bout at 2:47 of Round 5.

“You can’t leave it in the hands of the judges, you gotta go for the kill,” said Jack, 33, who was held to a disputed draw vs. James DeGale in January. “Who don’t wanna be on a big card like this? Everything happens for a reason.”

Cleverly (30-4, 16 knockouts) may not feel that way. He wasn’t remotely competitive, and seems to be contemplating retirement after receiving yet another beating.

“Jack was very strong. He caught me and broke my nose in the third round,” said Cleverly, 30, who has just two wins in his last five bouts. “It was a downward spiral from there. I was wounded and protecting myself. It’s horrible but part of the sport.

” … I have a lot of miles left in me. I’m a two-time world champion. I have to take it from here and decide where I go.”

The 33-year-old won the super middleweight title with a points victory over Anthony Dirrell in 2015 and then topped George Groves later that year. Now, Jack is clearly ready for the best of the light heavyweight division.

“I (want) Adonis Stevenson, let’s get it on,” he said, and then took a shot at the lineal champ’s weak opposition. “Unless he wants a trilogy with Andrzej Fonfara, let’s do it.”