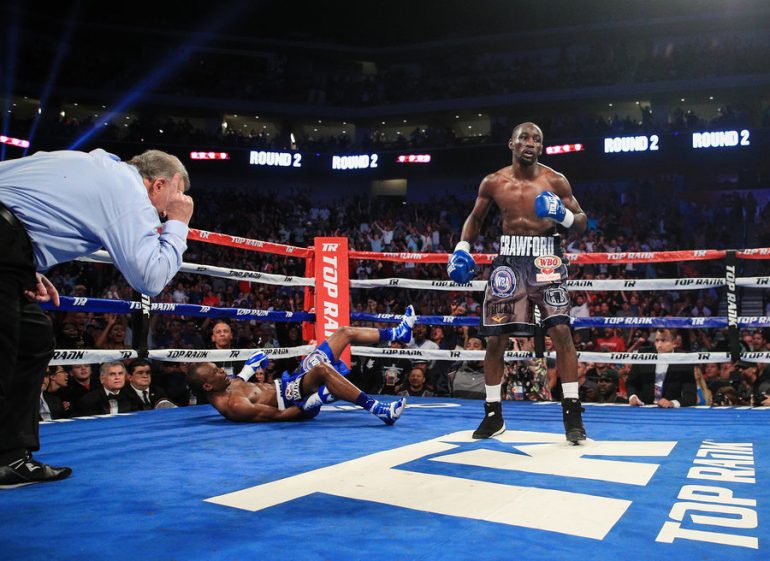 Crawford took the wind out of Julius Indongo to become the undisputed champion at 140 pounds. Photo by Mikey Williams/ Top Rank
19
Aug
by Mike Coppinger

LINCOLN, Neb. — Terence Crawford jumped up and down in the corner like a kid on Christmas Day as the seconds rolled by.

Julius Indongo writhed around in pain with no hope of beating referee Jack Reiss’ count. The left hook that connected square with his liver was debilitating. There would be no recuperation. It was all over at 1:38 of Round 3.

Crawford (32-0, 23 knockouts) became the first man to unify all four sanctioning body belts since Bernard Hopkins’ body knockout of Oscar De La Hoya in 2004 on Saturday before a hometown crowd of 12,121 at Pinnacle Bank Arena on ESPN.

“I’m the only one that can say I’m the undisputed champion of the world,” Crawford said, five belts strapped across his waist and arms, including THE RING championship. “And that’s real. No one else can say that.”

He likely won’t be able to say that for too long, though. That’s because Crawford plans to vacate all four titles and climb to welterweight for his next bout. Top Rank CEO Bob Arum said Crawford will travel to Australia to watch the rematch between Manny Pacquiao and Jeff Horn in November with an eye on fighting the winner in the first quarter of 2018.

“I’m on my way (to welterweight),” he said. “Listen, at the end of the day there is only going to be one name (at 147 pounds) and that’s going to be Terence Crawford.”

Said Arum: “He’s getting better every fight. You couldn’t ask for a better performance. (Indongo) was beating everybody and look how he took care of him. Usually he takes four or five rounds figuring out his opponent. But (Crawford) figured him out from the get go.”

There’s no denying that. The switch-hitting Crawford started fast, firing overhand lefts from the southpaw stance against the lankier, rangier Indongo, who traveled from Namibia to compete in a 140-pound title fight for the third consecutive time. The 34-year-old trekked to Moscow in December and knocked out Eduard Troyanovsky in one round to claim the IBF title. The WBA belt was next after a wide decision victor over Ricky Burns in Glasgow, Scotland.

But Indongo (22-1, 12 KOs) was no match for Crawford, a simply sensational fighter who is every bit deserving of his No. 4 ranking in THE RING’s pound-for-pound rankings.

Crawford continued to shoot a right hand jab at Indongo’s midsection, while the African tried to measure his foe with a looping overhand left, the same shot that separated Troyanovsky from his senses and his title.

It would all be over soon, though.

Crawford connected on a stinging right hand to the body followed by an overhand left that dropped Indongo in Round 2. The 29-year-old Omaha native patiently closed distance and tried to score the final blow, but he never was reckless in his pursuit. After all, Indongo still was there winging left-hand bombs. And every time Crawford missed, Indongo unleashed the kind of punch that could end matters if it only landed flush. But it didn’t.

The round ended, and when the third frame began, it appeared Indongo had recovered from the knockdown. Perhaps he had. But soon, he was on the canvas again, this time from a digging left to the body, and this time, he wouldn’t jump to his feet.

Instead, he rolled around the ground in pain for a good 15 seconds after Reiss reached the count of 10 to conclude the fight and his short reign as unified 140-pound champion.

“He hit me hard to my body,” Indongo said solemnly. “I couldn’t breathe. It hurt so bad. When he hit me that hard, not only did it hurt, it took my mind away. I couldn’t think.”

The 2008 Olympian will have plenty to think about now on the long, approximately 22-hour trip back to Namibia. And his luggage will be a little lighter. His belts? Now property of Crawford, the king of 140 pounds, and soon, maybe, the ruler of boxing’s pound-for-pound list.

“It means everything — when you start boxing when you’re 7 years old, that’s your dream to become world champion and after that you want to become something bigger than world champion,” Crawford said. “You just don’t stop there; you go to the highest level possible.”

Luckily for the sport of boxing, there’s clearly levels still for Crawford to aspire to and climb. There’s no disputing that.