Carl Frampton on Andres Gutierrez fight: ‘I’m as ready as I can be’ 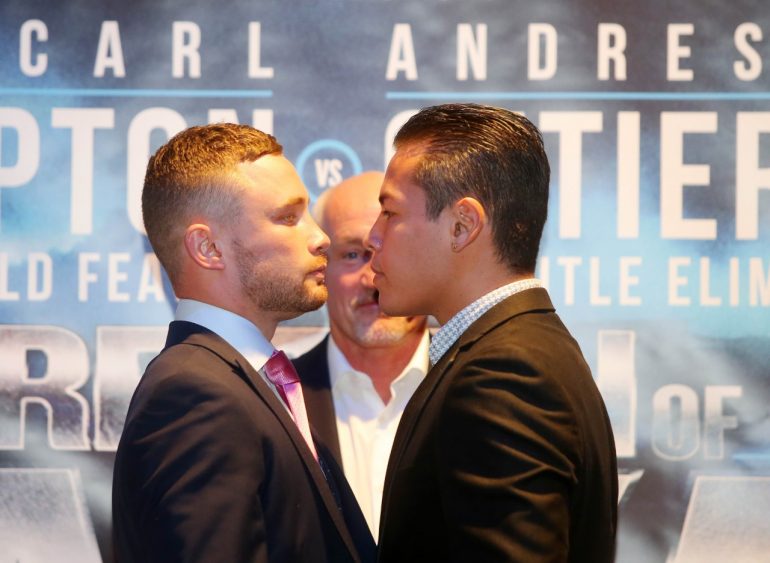 Belfast boxer-puncher Carl Frampton was riding the crest of a wave as he came into 2017. “The Jackal” had outpointed Leo Santa Cruz in a career-best victory to claim the WBA belt in his featherweight debut and was the favorite to retain it in a direct rematch. Then came the curveball. In late January, Santa Cruz boxed brilliantly over 12 rounds to claim revenge.

Unlike other sports, boxing forces it’s practitioners into a prolonged period of convalescing after they encounter defeat. A top-level fighter isn’t allowed to go back into the field a week later. They don’t get to erase the memory of a setback by winning almost immediately. Time is all they have. Time for wounds to heal – physical and mental.

“It took me a while to get over (the loss) but I had a break to get it out of my head as much as possible,” Frampton told RingTV.com. “I ended up putting things in perspective. I lost a fight to a three-weight world champion. He deserved to win but it was relatively close and I had an off night. I didn’t perform and still managed to push a three-weight world champion in a close fight.

“When you think about it like that, it’s not that bad. And if you want to take a positive out of it, we’re set up for a third fight as long I keep winning.”

That’s another story. Before the second fight with Santa Cruz, there was plenty of talk about a potential decider being staged in Belfast. Frampton (23-1, 14 knockouts) had traveled to New York for the first fight and agreed to Las Vegas for the second. Santa Cruz, who resides in Rosemead, California, was considered the home fighter in both cases and a rubber match in Frampton’s hometown seemed fair.

But when is boxing ever fair? Santa Cruz’s hand was raised in victory and the Belfast rubber match plan became a distant memory.

“There was nothing in the contract to say that a third fight would be in Belfast but I thought he was a man of his word,” said Frampton who remains disappointed at his rival’s change of heart. “If not Belfast, I thought he would have came to somewhere else in the U.K. but they just flat out refused.

“Santa Cruz’s father has also said that I need Leo more than he needs me, which I think is a bit unfair. If you look back at both of our careers, when we’re retired and a third fight hasn’t happened, then I’m the one who was looking for it. I want it to happen. I’m willing to travel. If it doesn’t happen, it will be a blotch on his career – not mine.”

This Saturday, Frampton will face Mexico’s Andres Gutierrez (35-1-1, 25 KOs) at the SSE Arena in Belfast. Not the Mexican opponent of choice. But while Gutierrez might not have the skills or championship pedigree of Santa Cruz, his knockout ratio certainly commands respect. Frampton insists that he will not overlook the visitor even though he is a huge betting favorite.

“He’s young, he’s hungry, he’s an aggressive come-forward fighter and he’s had more knockout wins than I’ve had fights,” Frampton said. “Gutierrez is coming over here and people aren’t expecting him to do much. But if he puts in a good performance or upsets me, then he’s a huge name in boxing. I need to be on my game because I learned in the Alejandro Gonzalez fight (Frampton was knocked down twice before winning on points) that you can’t take anyone for granted.

“If there’s any slip-ups, then what can I do with my career? I’m ready for this fight. I’m as ready as I can be. I’ll be honest with you, I would have preferred a bigger name. I would have preferred Santa Cruz or (Lee) Selby but it just wasn’t to be. Hopefully we can get one of those names for the next fight, before the end of the year.”

When a third fight with Santa Cruz fell through, Frampton turned his attention to Selby, who currently holds the IBF featherweight title. Unfortunately for him, Selby had to fulfill a mandatory obligation against Jonathan Victor Barros and was unavailable. Frampton vs. Selby looks like a natural matchup.

Earlier this month, Frampton looked on from ringside as Selby dedicated a 12-round unanimous decision victory over Barros to his mother, who had tragically passed away just four days earlier.

“I don’t want to judge the performance because of the circumstances Lee was fighting under,” Frampton said. “I don’t understand how he done it but he done it and it takes a very strong individual to go through a world title fight days after the death of your mother.

“I was a bit nervous for Lee because who knows how his head was going into that fight. In the end, though, he stuck to the game plan, he was focused throughout and he won the fight convincingly. Knocking Barros down in the final round was a bonus. Fair play to him for doing it, first and foremost, but also for winning comfortably.”

So Selby could be in Frampton’s near future but Gutierrez is first. This bout will mark the first time Frampton has boxed in front of a home crowd for 2½ years and he is relishing the occasion.

“Obviously, the win is the most important thing but it’s more than that,” said Frampton, who is rated No. 3 by THE RING at 126 pounds. “It’s about looking good. We’re on terrestrial television, so the exposure is huge and it’s a huge platform. We’re talking about potentially millions of people watching.

“I’m looking forward to it and I think the fans should be expecting a raucous atmosphere. I want to prove that the last fight was just a blip. I’m not on the slide. I’m not going downhill. I still have so much more to give. I still feel like I’m improving. This guy is made for me and I think I’m going to outbox him, outfight him at times and I think I’ll stop him inside the distance.”

Frampton vs. Gutierrez will be shown live on Channel 5 in the U.K. beginning approximately 8 p.m. local time. The fight will also be available on a Showtime digital platform in North America at 5:30 p.m. ET/ 2:30 p.m. PT.