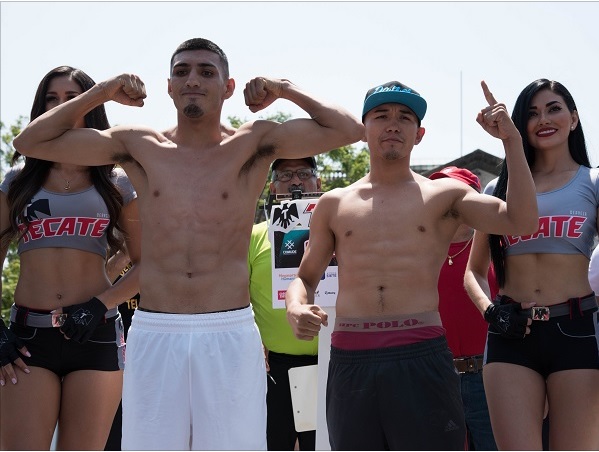 It was no different Saturday night when he won a hard-fought, 10-round unanimous decision over Sergio Puente at the Domo del Parque San Rafael in his hometown of Guadalajara, Jalisco, Mexico.

After displaying modest power early on in his career, the 22-year-old Diaz has demonstrated an improving skill-set to outbox his opponents. Including his victory over Puente, Diaz has won his last five bouts by decision.

Puente was 3-3 in his previous six bouts.

The stronger and bigger Diaz, who made his pro debut at the age of 16, landed the more-telling blows, outboxing Puente through the first four rounds. Puente was at his best in round five, momentarily stunning Diaz with a three-punch combination.

Puente pressed the action in round six but Diaz made an adjustment to outbox Puente over the next several rounds. Toward rounds nine and 10, Puente’s punch output dropped significantly, thanks, in part, to Diaz finding a home for landing repeated left hooks to the body earlier in the fight.

In the co-feature, hard-hitting bantamweight Emanuel Navarrete made quick work of Luis Bedolla, stopping him in the second round of a scheduled 10 round.

Bedolla was dropped by a left uppercut that split his guard and landed on the chin. Bedolla was able to get up but referee Jesus Salcedo stopped the bout at 2:28.

Bantamweight Jocelyn Arroyo won a six-round unanimous decision over Maricruz Rodriguez (1-3, 1 KO). Scores were 60-54, 59-55 and 58-56 in favor of Arroyo, who improves to 19-1 (with 7 KOs).
Francisco A. Salazar has written for RingTV.com since October of 2013 and has covered boxing in Southern California and abroad since 2000. Francisco also covers boxing for the Ventura County (California) Star newspaper, BoxingScene.com and Knockout Nation. He can be reached by email at [email protected] or on Twitter at FSalazarBoxing.