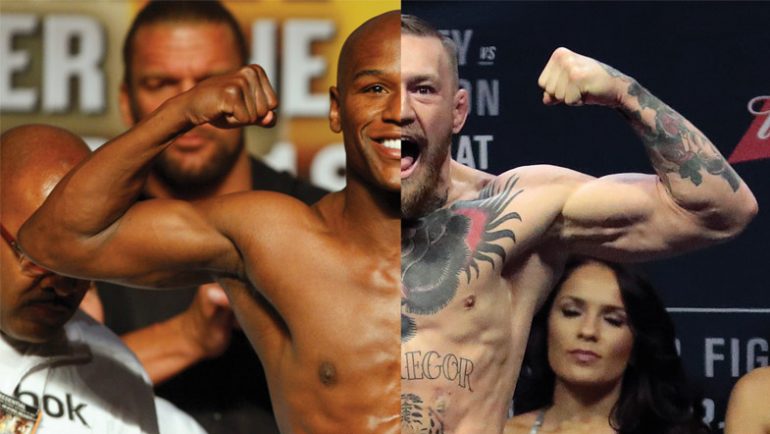 The crossover fight between an all-time great boxer and UFC’s biggest star is official.

Floyd Mayweather Jr. announced via Twitter on Wednesday that he’ll fight Conor McGregor on Aug. 26, putting to bed a year of posturing between the braggadocious athletes.

Showtime Sports will televise the super fight on its pay-per-view arm.

“We are thrilled to bring this incredible event to a global television audience via Showtime PPV,” said Stephen Espinoza, Executive Vice President and General Manager of Showtime Sports in an email to RingTV.com. “This matchup is unprecedented. There has been overwhelming demand from fight fans and it’s great to be able to deliver.

“As we’ve already seen this evening, Mayweather vs. McGregor has generated buzz that reaches far beyond that of the considerable boxing and MMA audience. Both Floyd and Conor are trend-setting personalities who’ve transcended their respective sports. They carry unmatched reputations for spectacle and athleticism, and together they will create a once-in-a-lifetime event.”

Espinoza is correct in calling it an unprecedented sporting event: a top boxer vs. a top MMA fighter in a boxing match. For that reason, the fight has been mocked by those in the boxing industry, including Oscar De La Hoya. McGregor is a skilled striker in the UFC, but how will that translate to boxing?

After all, Mayweather is perhaps the greatest defensive fighter who ever lived. And even at age 40 and coming off a two-year layoff, it would be a monumental upset — one of the biggest in sports history — if McGregor somehow found a way to win.

It might not be viewed as competitive, but boy, will it generate a boatload of money.

Mayweather and McGregor aren’t just the two most popular figures in combat sports; they’re a pair of the most recognizable athletes in the world. Period.

Chatter about the matchup has persisted for over a year, with interest among casual sports fans trending upward all the time.

Mayweather (49-0, 26 knockouts) will come out of retirement and go for his 50th win, which would pass Rocky Marciano’s hallowed mark.

While Mayweather is chasing history, McGregor, 28, will be lacing up the gloves in a boxing match for the first time, pro or amateur. He’s an accomplished UFC athlete (the Irishman has won title at lightweight and featherweight) and McGregor has become enormously popular. He’s fought on PPV five times, with his last four eclipsing the one-million mark.

Mayweather, who hasn’t fought since a shutout of Andre Berto in September 2015, is the richest prize fighter of all time. “Money” pulled in close to $300 million for his mega fight with Manny Pacquiao, and his PPV shows against De La Hoya and Canelo Alvarez both surpassed 2 million buys.

The Notorious One will certainly have his work cut out for him, in his pro boxing debut no less, but win, lose or draw, he’s guaranteed to earn far more money than he’s ever dreamed of and ever could hope to grab in an octagon.