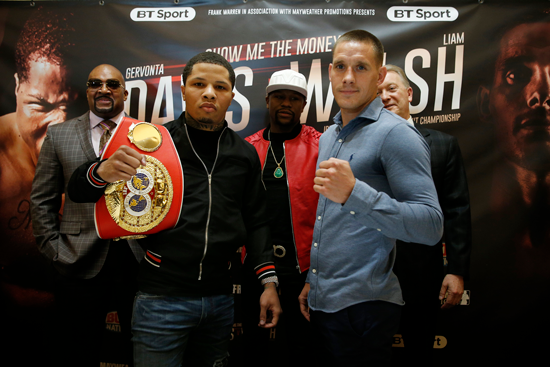 British junior lightweight Liam Walsh may not be a household name but he has plenty of qualities. Quiet and unassuming by nature, the unbeaten Englishman is a classy technician, an adept switch-hitter and he’s proven, through the course of a seven-year professional career, to be a real fighting man.

On Saturday, at the Copper Box Arena in London, Walsh will face his very antithesis for the IBF 130-pound title. Gervonta Davis is a flamboyant and brash boxer-puncher from Baltimore, Maryland, who is as rumbustious as Walsh is reserved. The former amateur standout is being groomed for stardom by none other than future Hall-of-Famer, turned promoter, Floyd Mayweather Jr.

Walsh (21-0, 14 knockouts) is a heavy underdog but underneath the modest exterior is a man who seems primed for the biggest night of his career.

“I’m mature, experienced and everything has fallen into place at the right time,” stated Walsh in an interview with RingTV.com.

“It was important for me to serve my apprenticeship (as a professional) because I only had seven senior fights (as an amateur). I didn’t move too fast, although I won the Commonwealth title in my 10th fight and I’ve been competing at a high level ever since. I’m still hungry, though, because I’ve not had the really big fights.”

Davis, who is rated No. 6 by THE RING at junior lightweight, is also unaccustomed to the big fight atmosphere. The hard-hitting American won his title from Jose Pedraza on the James DeGale-Badou Jack undercard in January, but most of his opposition has been undistinguished. On the eye, however, Davis (17-0, 16 KOs) does look like a star in the making.

“I’m honest and I’m a realist – he’s a very, very good fighter,” Walsh said in earnest. “His main strengths are his speed, he’s obviously got power but then, speed is power. Some people are also trying to give me false confidence, saying that I’m more experienced and, while there might be an argument there, he’s had over 200 amateur fights. 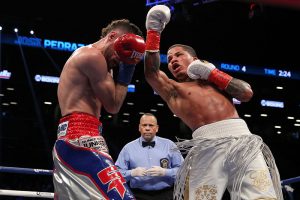 “People knock him and say that he hasn’t fought anyone but if he’d gone in with good opponents from the start, he’d never have got his title shot. His team have been smart and they knew how good he was. Davis has been in the gym sparring the likes of (Yuriorkios) Gamboa and he has gained valuable experience. Pedraza took that fight thinking; he ain’t that good, he hasn’t fought anybody.”

The seventh-round stoppage over the previously undefeated Pedraza was a top performance. Davis was too quick, too powerful and too skillful for a much more experienced foe. It is therefore difficult to find fault in the 22-year-old boxer-puncher, although Walsh, who is eight years his senior, does not view Davis as the finished article.

“I don’t think his feet are the quickest,” offered the challenger. “He tends to drop off a lot; trying to get you to overreach, so he can nail you. We don’t know about his stamina either because in the fourth and fifth round of the Pedraza fight, it looked like the tide was turning. He’ll tell you he was letting Pedraza blow himself out, but he’s gonna say that.

“He’s only 22, so he’ll make decisions in fights that he probably wouldn’t make five years from now. I’m definitely a better and more mature fighter than I was at 22 years old. As this fight plays out, he might start making wrong decisions. Also, late on, when your mental strength is questioned, I know I’m good for it. We don’t know if he is, although I’m preparing like he’s the best fighter to ever walk the earth.”

I felt like the stupidest person on earth when I brought up the subject of the southpaw stance. Davis is a left-hander and, as far as I was led to believe, so was Walsh. I’ve watched plenty of his fights, including a career-best performance against Andrey Klimov (UD12) last October. However, when I asked the Englishman if he’ll be comfortable facing a fellow-southpaw, the response stopped me dead in my tracks.

“I’m actually orthodox but 100 people out of 100 think I’m a southpaw,” countered Walsh. “There isn’t one journalist I’ve encountered who knows that I’m naturally orthodox. That’s because I’ve boxed most of my fights as a southpaw and I’m even listed on Boxrec as a southpaw. 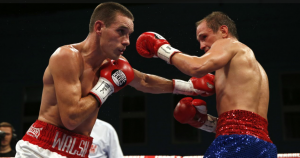 Walsh (left) was a step ahead of Klimov. Photo: Frank Warren PR

“I just find I’m defensively better southpaw but in the orthodox stance I’m physically stronger and more aggressive. I do like going southpaw, though, and that is something I’ll be using because I think I’ve got the better lead hand. Davis stabs to the body and leads with the right hook but he doesn’t do a lot with his front hand. If I can win the battle of the lead hand, he could start over-committing and taking risks.”

Walsh humorously acknowledged that he is sick of looking at southpaws. He confirmed to me that he has completed well over 100 rounds of sparring against left-handers and is desperate to swap punches with an orthodox opponent.

The other thing that Walsh might be sick of looking at is Davis’ promoter. Mayweather, almost two years into retirement, is now talking the talk for his fighters and the act is beyond tedious. Walsh has already had to suffer stories of diamonds, gold and Bugattis and looked bored out of his mind within seconds.

“I’m not worried about him,” said Walsh of the former five-weight world champion. “I admire what he’s done as a boxer; fair play to him, well done, pat on the back but, as a man, I’m not in awe of Floyd Mayweather. I’m not in awe of any man. I’m in awe of my two brothers, my kids and that’s about it. I don’t give a s__t if Floyd is standing there or not – whatever. That doesn’t play a part in this.

“(Mayweather) does the talking for his fighters and it’s all for his own ego. As I said, I admire what he’s done in boxing. I’ve been over to support him in America against (Manny) Pacquiao, (Victor) Ortiz, (Ricky) Hatton. I just don’t think he does himself any favors. Some people are so poor that all they have is money. Money is all this guy has.”

Despite his attributes as an athlete and a humble demeanor, Walsh also has a compelling backstory. His twin brother, Ryan, is a successful professional and older brother Michael retired from the sport, unbeaten, in 2015. All three men were groomed to be fighters by their father, John, who tragically passed away in 2011.

Walsh, who became a father for the second time during training camp for this fight, held the same tone throughout our conversation until the subject matter changed to family. The challenger paused for a few seconds and his passion instantly became visceral.

“I have to rein it in because you just asked me that question and all the hairs on my arms stood up,” said Walsh who sounded genuinely emotional. “I’m that deep into it but I need to try and put a lid on it because it means so much.

“This was my dad’s dream and my biggest fear is letting family down. I don’t care about letting down promoters, managers, trainers. Well I do care, and I want them to be happy, but letting my family down is the worst thing ever. If I perform at my best and it’s not enough, then I don’t think I’ve let anyone down. If I give my all and don’t win, that’s all a man can do. Anything less and I don’t think I’d get over it.”

Walsh’s nickname is “Destiny” and on Saturday he has the opportunity to live up to his moniker.

The bout will be shown live on BT Sport/ BoxNation in the U.K. and on Showtime in the U.S.