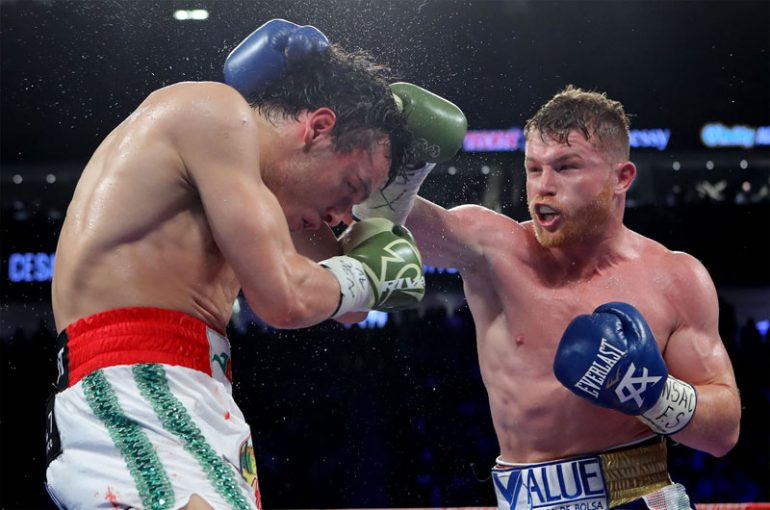 Canelo Alvarez’s shutout victory over Julio Cesar Chavez Jr. was in the books less than two hours when he had his first stare down with Gennady Golovkin, with whom he went nose to nose on the ring canvas around 11 p.m. PT on Saturday.

The Canelo-GGG deal was finalized a few weeks ago, according to promoter Oscar De La Hoya, but obviously they had to wait until Canelo beat Chavez to make the announcement. They didn’t wait long: They told the world immediately after the fight about the agreement and then had the first Canelo-Golovkin press conference right there on the ring canvas.

Chavez actually appeared first but he had already become irrelevant, the result of his pathetically onesided loss to Canelo. And what could he say anyway? 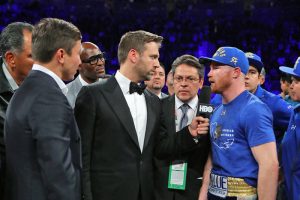 Then Canelo, showered and dressed in a suit, his face unmarked, climbed back onto the ring canvas. The reporters on hand were told to ask only questions about the Chavez fight until Golovkin joined Canelo. Again, what could he say? He was happy.

Then Golovkin joined Canelo and we could begin to discuss in earnest what many believe is the most-lucrative possible matchup in the sport and one that the most cynical of fans thought might never happen.

The fight will take place on September 16. The site hasn’t been selected.

“I told you it was going to happen in 2017. I told you,” said De La Hoya, obviously giddy that the deal is done.

To illustrate the magnitude of the Canelo-GGG fight, De La Hoya said he has already received calls from movers and shakers around the world who want to host the event.

Why is it so big?

Canelo is arguably the biggest attraction in the sport. He is hugely popular in the biggest market in boxing, Mexicans and Mexican-Americans. And Golovkin has built a strong following largely because of his punching power, which had produced 23 consecutive knockouts until Daniel Jacobs took him the distance in his most recent fight.

Plus, a Canelo-Golovkin back story has enhanced the anticipation. Canelo gave up his WBC middleweight title after defeating Amir Khan a year ago rather than agree immediately to defend his belt against Golovkin. The WBC had given him only a few weeks to reach a deal with GGG, which Canelo deemed inadequate. The public didn’t buy that, though; they saw Canelo’s decision as a way to dodge Golovkin and battered him on social media.

That’s why Canelo used the word “fear” three times in three sentences immediately after his victory over Chavez.

Well, if he was afraid before, he evidently isn’t now. And that’s good news to Golovkin and his handlers.

“The fight is a long time in the making,” said Tom Loeffler, Golovkin’s promoter. “… They were true to their word. They’ve been saying since last year that the fight would take place in 2017. And here we’re making the announcement. And there couldn’t be a bigger announcement in boxing.”

No one is happier than Golovkin.

GGG is recognized as one of the best fighters in the world – maybe the best – but he’s 35 and has yet to take part in anything close to a superfight, one that would earn him a monster payday and provide a stage large enough to underscore his greatness.

With the clock ticking, he had to wonder whether this day would ever come. And that extended into the Canelo-Chavez fight: Canelo had to win in order for him to face to Golovkin in September. Any anxiety the Kazakhstani might’ve been feeling probably dissipated by the third or fourth round, when it became fairly clear that Chavez was out of his league.

Golovkin doesn’t have much to say in English but his smile was telling at the press conference.

“Right now, everybody is excited. I’m very happy. … This is the biggest fight in boxing,” GGG said.

“First of all, I want to say I’m happy that the fight is finally here,” he said. “A lot of you said it wouldn’t be made. I’m very happy to give fans another great fight, which is the only thing I want in my career.”