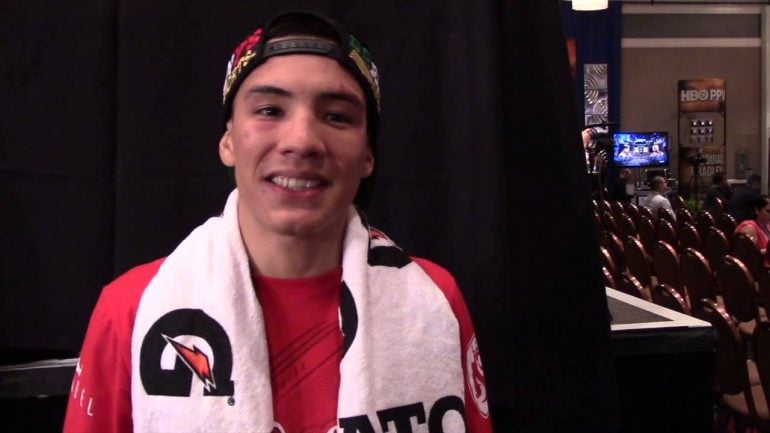 Oscar Valdez, Jermell Charlo and Avtandil Khurtsidze were among those who made strong statements in high-profile fights this past weekend and each has been rewarded in the RING Ratings.

Valdez, our No. 7-rated featherweight last week, overcame a spirited challenge from unrated Miguel Marriaga to win a clear decision and retain his title on Saturday. As a result, Valdez moves up one spot.

And Khurtsidze (No. 8 last week) stopped unrated Tommy Langford in five rounds in a middleweight bout Saturday. He also moves up one position.

Badou Jack (No. 2 last week) drops out because he has moved up in weight. He is replaced by Jesse Hart, who enters at No. 10.

With Jack gone, the No. 2 spot was assumed by Gilberto Ramirez (No. 3 last week) after he outpointed unrated Max Bursak on Saturday. Arthur Abraham (No. 8 last week), who defeated unrated Robin Krasniqi by a unanimous decision Saturday, moved up to No. 7 as result of Jack’s departure.

Michel Soro (No. 8 last week) moves up to No. 7 after knocking out unrated Javier Francisco Maciel in three rounds Saturday.

Shawn porter (No. 3 last week) retained his position after stopping unrated Andre Berto in the ninth round Saturday.

Jessie Magdaleno (No. 2 last week) knocked out unrated Adeilson Dos Santos in the second round Saturday to keep his spot.

Marlon Tapales (No. 5 last week) drops out because is moving to junior featherweight. Unbeaten Emmanuel Rodriguez comes in at No. 10. Also, Zolani Tete (No. 8 last week) moves up one notch after outpointing Arthur Villanueva on Saturday.