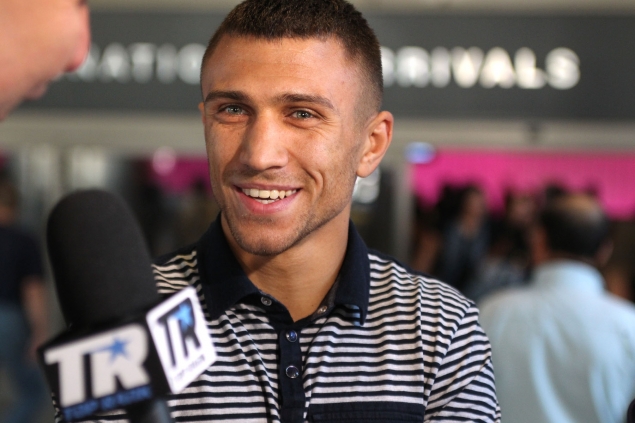 Vasyl Lomachenko: Lomachenko seems to be on a fast track to becoming the pound-for-pound king, although fighters like Terence Crawford, Mikey Garcia and a few others might have something to say about that.

The Ukrainian wizard gave us another dazzling performance on Saturday night, when he made a pretty good, determined fighter in Jason Sosa look like a beginner.

The HBO announcers repeatedly raised the possibility that Lomachenko is the best fighter in the world at this moment, which might be the case. The reason I and many others won’t anoint him king quite yet is that he hasn’t done enough to prove it.

He passes the “eye test” as impressively as possible but one’s track record is also part of the pound-for-pound equation. He has had all of nine fights (8-1, 6 knockouts) and he lost one. He has beaten good fighters – including Gary Russell Jr. and Nicolas Walters – but hasn’t beaten enough to rise to the top.

His potential seems to be more immense than anyone in recent memory, though. I hesitate to state this but I think he could turn out to be better than Floyd Mayweather Jr.

I don’t believe anyone in the past half century was or is a better defensive fighter than Mayweather, whose shoulder roll made him next to impossible to hit. Lomachenko uses his feet and quick reflexes to present similar problems for his opponents, who generally are reduced to punching air.

And I believe Lomachenko is a better offensive fighter than Mayweather was. The CompuBox numbers favor Mayweather: Lomachenko ranks No. 1 in plus-minus at +20.7 among active fighters, meaning his connect percentage exceeds his opponents’ by that figure; Mayweather had a remarkable plus-minus of +24.5 over that 15-fight period.

Of course, we’ll see how this plays out, as comparing anyone to Mayweather is a dangerous game. Lomachenko has yet to face special fighters like Crawford and Garcia — complete, experienced boxers who could determine where Lomachenko stands among the best of his time.

The second-most impressive fighter this weekend was light heavyweight Oleksandr Gvozdyk (13-0, 11 KOs). Lomachenko’s fellow Ukrainian was supposed to have received a test from capable Yunieski Gonzalez (18-3, 14 KOs) on the Lomachenko-Sosa card. Instead, it took Gvozdyk only two-plus rounds to take Gonzalez out. Gvozdyk’s tight technique, quick hands and killer instinct could spell trouble for the top 175-pounders. … Cruiserweight titleholder Oleksandr Usyk (12-0, 10 KOs) might turn out to be as good as billed but I doubt he’ll ever look as impressive as countrymen Lomachenko and Gvozdyk. Usyk started slowly but ultimately beat Michael Hunter (12-1, 8 KOs) fairly easily, using muscle as much as ability to win a one-sided decision. That formula has worked for Usyk so far. We’ll see how far it will take him. Hunter, a former U.S. Olympian, gave a credible performance. He’s a good boxer and has courage, as he demonstrated by surviving a harrowing final round. His lack of punching power could hold him back, though. … Terry Flanagan (33-0, 13 KOs) defeated Petr Petrov (38-5-2, 19 KOs) by a unanimous decision to retain his WBO lightweight title on Saturday in Manchester, England. That could put him in a position to face Lomachenko, who would have to move up one weight class to face him. The Englishman (rated No. 2 by THE RING at 135 pounds) would be a good next step for Lomachenko. I believe Flanagan has little chance of winning that fight but is a good enough boxer to provide a stiffer test than Sosa did.