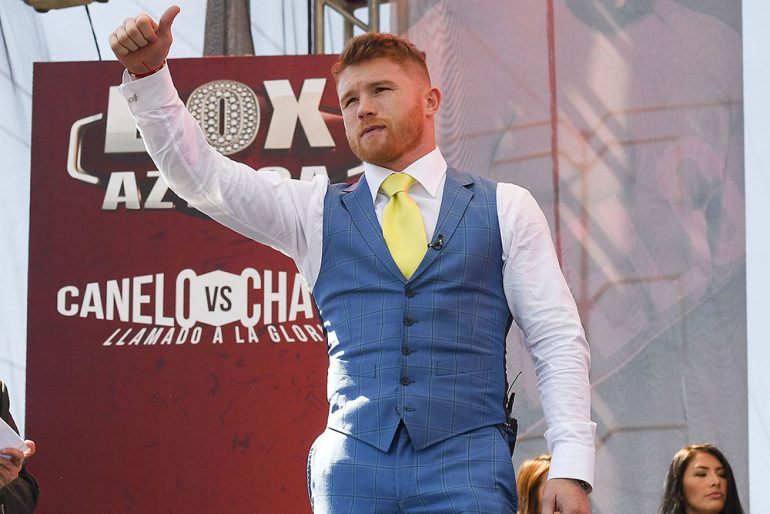 Golden Boy Promotions is “close” to striking a deal with Tom Loeffler for a mega-fight between Canelo Alvarez and Gennady Golovin in the fall, Golden Boy President Eric Gomez told RingTV.com on Tuesday. Oscar De La Hoya earlier told a small group of reporters in Manhattan he’s made an offer to Golovkin and “the ball’s in his court” to accept the deal. So while an agreement could be nearing completion, there appears to still be a major hurdle to overcome, according to De La Hoya.

“There’s some little details, there’s some loose ends, it’s not done yet,” Gomez told RING on Tuesday following a press-stop in New York City for Alvarez’s May 6 bout with Julio Cesar Chavez Jr. on HBO PPV. “I can tell you that we’re close. But there’s some details that have to be worked out. There’s a couple of little details.”

Golden Boy has reportedly offered Golovkin a flat flee between $10 and $15 million. Gomez declined to comment on the reported amount, other than to say it was inaccurate. De La Hoya was asked on Tuesday if the offer is a flat fee or if it involves a percentage of the overall deal. “Let’s just say that the deal is a combination of both,” De La Hoya said. “If they’re not happy with the deal, then it’s not on us. The deal is there. He would make the most money ever against Canelo and if you really want the fight — Canelo’s not running from nobody. He wants to fight the very best, and that’s absolutely including GGG.”

Added Canelo through translator/matchmaker Robert Diaz, “We’ve set the table for him. It’s on his side now. He has to make a decision if he wants it or not.” De La Hoya reiterated that an offer has been made and it makes sense for Golovkin to take it even if Golovkin’s partisans may have a different opinion that he deserves a percentage of the overall pie. “The offer is there,” the Golden Boy CEO said. “He would be making the most money ever. Golovkin without Canelo is — he’s making what he’s making. We’re waiting for him and the ball’s in his court. There is a date in September wide open so it’s just a matter of him signing on the dotted line. The offer is there. Eric’s been talking to Tom and the offer is there.”

Of course, for Golovkin-Canelo to happen, both men have to get through their next fights. Canelo will face Chavez Jr. at a catch-weight of 164.5 pounds at T-Mobile Arena in Las Vegas. Golovkin takes on Danny Jacobs on March 18 on HBO PPV at Madison Square Garden. Canelo reiterated on Tuesday his interest in facing Golovkin later this year. “Look, it’s a fight that’s inevitable,” he said. “It has to happen.”