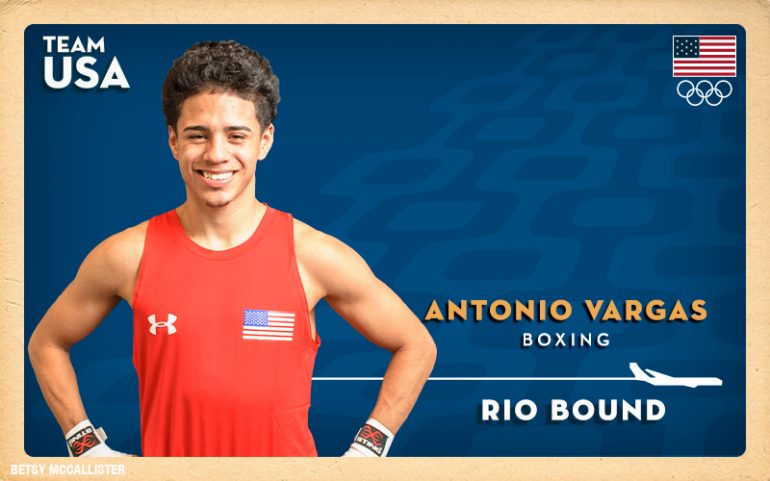 Vargas, the 20-year-old who represented the United States at the Olympic Games in Rio de Janeiro this past summer, amassed an amateur record of 123-7.

“We had a lot of offers from promoters all over the world and we were considering several of them, when Top Rank made their offer,” said Vargas. “I told my manager (David McWater) immediately that was with whom I wanted to be with.

“It’s a dream come true to be signed by Top Rank.”

Vargas, whose father is Puerto Rican and mother is Mexican, resides in Ocala, Florida.

The Las Vegas-based promotional company, which is led by Bob Arum, is best known for developing prospects to eventually fight for and win world title belts. The latest example is Oscar Valdez, who represented Mexico in the 2008 and 2012 Olympic Games and won the vacant WBO featherweight title on July 23.

Representatives from Top Rank are very high on Vargas.

“Antonio is an extremely gifted amateur who will flourish in the pro ranks,” said Top Rank Vice President Carl Moretti. “Combine that with his popularity in the Central Florida region, where Top Rank will be promoting numerous shows with our partners All Star Boxing, should catapult Antonio quickly as an attraction as well.”

Vargas, who will compete in the junior bantamweight and bantamweight divisions, will be trained by Tito Ocasio, a veteran trainer based in Florida.

Top Rank states it will soon make an announcement on where and when Vargas will make his professional debut.

Francisco A. Salazar has written for RingTV since October of 2013 and has covered boxing in Southern California and abroad since 2000. Francisco also covers boxing for the Ventura County (California) Star newspaper, BoxingScene.com and Knockout Nation. He can be reach by email at [email protected] or on Twitter at FSalazarBoxing.