Joshua vs. Klitschko: The Bromance We Need 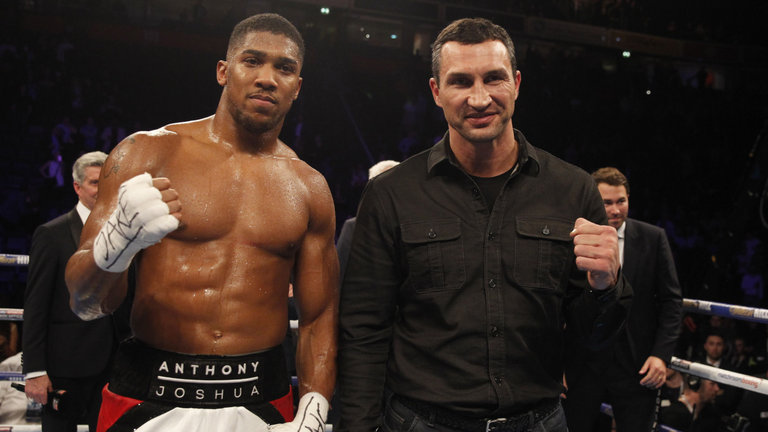 Another day and another press conference to announce another pay-per-view event at another soon-to-be-sold-out British venue. It’s by now a recurring theme. Better yet, an indication of a thriving market. Only this latest one, set for April 29, 2017, is notably different. It takes place at Wembley Stadium, capacity in excess of 80,000, and features two heavyweights who have bizarrely elected to sell the event with handshakes, fist-bumps and smiles rather than churlish insults and airborne tables. How brazen, how original. There are also title belts, more than one in fact, and a two-way appreciation that stems from an old sparring session neither man has chosen to regurgitate and rewrite in order to brag or establish a revenge storyline. Inconceivable, I know, but it’s almost as if Anthony Joshua and Wladimir Klitschko actually like each other and, crazier still, aren’t afraid to show it.

“What happens if Anthony wins this fight? I will congratulate him,” said Klitschko this afternoon at a Wembley press conference. “When I win this fight, I will help him come back.

“I was and I am and I will be very complimentary about Anthony. The first time I saw him perform here in London (Olympic Games) in 2012, I felt he was following in my footsteps.

“Anthony is an outstanding champion and athlete. He has always been respectful, watching, learning and observing.

“I see differences in the way he boxes now. He’s getting the self-confidence. He trains with modern technology. He’s using it to his advantage. He’s 27 and he’s a world champion and Olympic champion. He is 18-0 with 18 knockouts. How can I not be impressed with that?

“We are friends in a certain way. I called him ‘little bro’. But even when I was in the ring with my bro (Vitali) we used to be very competitive. We will not be friends in the ring on April 29. We will perform our best.”

Joshua: “This is a fight that can take you from champion to legend overnight. This will get the masses out and draw massive attention. This is the start of a legendary campaign. It’s history, an amazing opportunity and the time is now.

“I have the utmost respect for Wladimir, not just for his achievements but for the man he is. We had Lennox (Lewis) and then we had the Klitschko brothers. They were the type of people I looked up to and took inspiration from. I take inspiration from Wladimir as a man. He’s a good man.

“We come together, the lions roar and then at the end of it you shake hands and life goes on. The best man will win.”

Klitschko: “It’s amazing that two fighters aren’t throwing tables or punching each other or saying what they’re going to do to each other.”

Boring though it might be, this geniality is a good sign. It’s a good sign because a projection of mutual respect, in lieu of processed hate, shows the fight actually means something and doesn’t have to be flogged the desperate, modern way; amateur dramatics, flailing fists, general petulance. It’s better than that. Bigger than that. More mature than that. The A-star student in a class of delinquents, Joshua vs. Klitschko is the most important fight in the heavyweight division, between the two most commercially powerful heavyweights, and its aim is to steer us back to stability following a year of turbulence. As such, there’s no need for either man to downplay their intelligence, much less sell themselves by way of pouting and come-hithering and slowly undressing beneath the flickering red light of pay-per-view persuasion.

We’re not even window shopping with this one. We know it’s good. We know we need it.

We need it because Tyson Fury had his wicked way with the heavyweight division one night in Dusseldorf and then gobbed in its face and chucked it soon after. It was left heartbroken and betrayed. He never bothered to call. Just took the belts and ran.

But time passed, excuses were made, belts were returned (albeit not to sender, rather flung haphazardly into a river somewhere), and now, in Fury’s place, sits Joshua vs. Klitschko, the unapologetic rebound. It’s kinder, cuddlier and far more trustworthy.

Beyond professional, Anthony Joshua’s career, from a business standpoint, has so far been exemplary. He’s 18-0, all 18 wins coming via knockout, and has the ability to sell out large arenas for routine IBF title defenses against the likes of Eric Molina and Dominic Breazeale. In essence, people pay a lot of money to watch him knock men out. Big men, chubby men, hopeless men. Just men. It doesn’t really matter. People even pay money – real money – for snapbacks with his name on them. Most impressive of all, though, is this: his last four fights, fights for which the odds were heavily in his favor, have headlined pay-per-view events in Great Britain. Count them up. Dillian Whyte, Charles Martin, Breazeale and Molina. Nice work if you can get it. Not many can. It’s for this reason green-eyed peers, especially fellow heavyweights, take digs and criticize. But here’s an undeniable truth: every single one of them, whether British or not, dreams of being able to do exactly the same. They all yearn to make big bucks for relatively simple fights. The easier, the better. They all want to be Anthony Joshua.

Why else would a man once so powerful and dominant, a man who placed so much value in control, joyously fist-bump his young pretender on Saturday night and then get on the microphone and relay to 20,000 inebriated Mancunians details of their April get-together as if unveiling the latest iPhone, as if he and Joshua were business partners stood before a projector screen, as if they were Rocky and Apollo splashing about in the sea in vests, bathing in one another’s masculinity, celebrating the fact they did it? Two fist-bumps, two bro-shakes, one traditional handshake. Yes, I counted.

Klitschko acted this way not just because he’s a nice, well-mannered guy but because he’s without a title and next year wants Anthony Joshua and all he brings – the 80,000-plus live gate, a potential million pay-per-view buys, the titles, the power – nearly as much as the rest of them. And by ‘them’ I mean the numerous other heavyweights dotted around ringside on Saturday night mean-mugging for the camera and then doffing their cap to Joshua and flashing him a ‘Pick me! Pick me!’ grin, one hand in the air, when catching his eye.

Ultimately, Joshua and his team opted for Klitschko because his name is Klitschko, thus well-known to the British public, and because he’ll be 41 years of age and inactive for 17 months by the time they fight. Oh, and Tyson Fury may have shown he’s all out of punches. It is diminishing risk, therefore, weighed up against staggering reward. If Joshua, 27, has indeed timed it right, he’s in, he grabs another title (the vacant WBA) and he knocks off the next best active heavyweight out there (simmer down, Deontay, your moment will come). That’s a pretty appealing upside. If things go wrong, however, as they sometimes do, that too is okay. Not ideal, but okay. Contingency plan: go-to clichés can be rehashed and he rebuilds on pay-per-view. He’s a work in progress, remember. Still learning, still hungry and humble, still AJ. Just now very rich.

Defeat is a real possibility, too, for Joshua may have been maneuvered perfectly in a business sense but that counts for little in an actual, proper fight, the very thing the business model has so far actively and impressively avoided. No doubt he’s set up to make money. No doubt he’s set up to run boxing in the U.K. for as long as he wants (or keeps winning). But is AJ the brand set up to master Wladimir Klitschko in only his nineteenth professional fight? No, probably not. The natural progression from Eric Molina is more along the lines of Chris Arreola (a joke, not a recommendation). That’s the next rung. Going from Molina to Klitschko, then, at least in boxing terms, is like going from the Westworld pilot straight to episode 10. It makes little sense. And that’s why there’s every chance Joshua’s wonderfully constructed pro career comes at a heavy cost, that his aversion to tests in his first year as champion combined with a desire to secure The Big One as soon as it was good and ready leaves him ill-prepared when reality hits in the form of a Klitschko jab, right hand or clinch.

Some might also realize how ignorant it is to predict a Joshua win based on the herky-jerky, pickpocketing antics of a six-foot-nine traveler who somehow befuddled Klitschko in 2015. Because, make no mistake, Anthony Joshua is not Tyson Fury. Different in every conceivable way, Fury was able to defuse Klitschko with hands down unorthodoxy and the mere threat of punches, so long were his arms, so good were his legs, whereas Joshua, Klitschko’s equal at six-foot-six, will be in and around the great Ukrainian’s range and presumably have to punch to gain control. Rest assured, even a seemingly minor detail such as that could prove decisive.

Yet, on the flip-side, one can argue Joshua possesses tools Fury is without. The explosiveness, the punch power, the finishing instinct, to name just three, are hardly things Klitschko will be all too keen to sample in his 41st year. Joshua also now has a real presence in the ring – imposing, solid, spiteful – that may get to Klitschko the way Klitschko’s own domineering presence used to stifle the ambition of his many, many impotent challengers. It could make a famously tentative man all the more tentative; perhaps, worse, for once feel like a challenger. There’s certainly a sense it’s Joshua’s time. His moment. His idea. His stage. And that’s a dynamic Klitschko, forever the star, scriptwriter and director of his own movie, has never previously encountered.

Whatever happens, in a post-Fury world let us be thankful for the boring do-gooders of the heavyweight division. Seriously. Future press conferences and face-offs won’t set pulses racing, nor will furniture be upended, cheeks slapped or catchphrases yelled, but for every pantomime-prizefight hybrid and every Joseph Parker versus Andy Ruiz Jr. and, gulp, Shannon Briggs versus Fres Oquendo, you need something like this, something like Joshua vs. Klitschko. Good and dependable. Wife material. A hot bath. A palate cleanser. The fight that calmly sits us down, takes us it in its arms, rubs our belly and tells us everything’s going to be all right; the heavyweight division will soon, I promise, make some kind of sense.