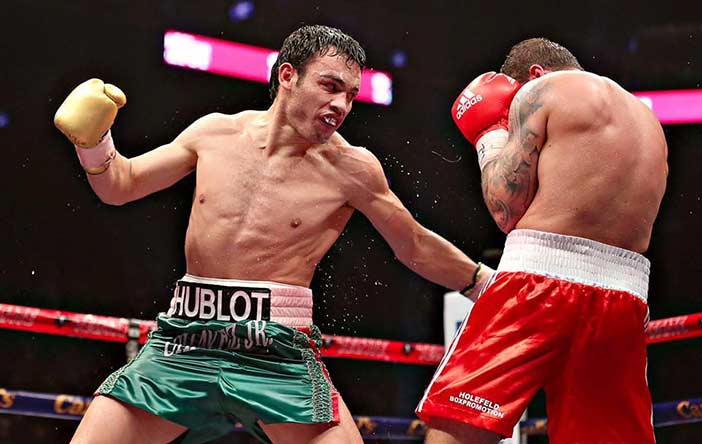 One day after shocking fight fans by making weight by a full pound, Julio Cesar Chavez Jr. put on a consistent performance in front of a partisan crowd.

Britsch, who hails from Germany, gave up three inches in height and more in reach but was successful in getting on the inside of Chavez’s guard. Chavez was able to utilize his size to wear Britsch down but was effective in landing two three-punch combinations to the head and body.

All three official ringside judges scored the bout 99-91 in favor of Chavez.

The catchweight for the Chavez-Britsch fight was 169 pounds but Chavez weighed 168 at Friday’s weigh-in.

It was Chavez’s first fight in almost a year-and-a-half, when he defeated Marcos Reyes by decision over 10 rounds on July 18, 2015.

After the fight, Chavez set his sights on two possible opponents.

Chavez said he would fight Alvarez at a catchweight of 165 pounds but that remains to be seen as word is Alvarez will likely defend his 154-pound title in March or April.

A fight between Golovkin and Chavez was penciled for The Forum in Inglewood, California in July of 2014 but never materialized due to alleged reports of Chavez turning down a seven-figure payday.

Hard-hitting middleweight Jaime Munguia (19-0, 16 KOs) dropped Alvaro Robles (19-7, 17 KOs) once in the third round and twice in the fifth before the fight was stopped at 1:06 of the fifth round.