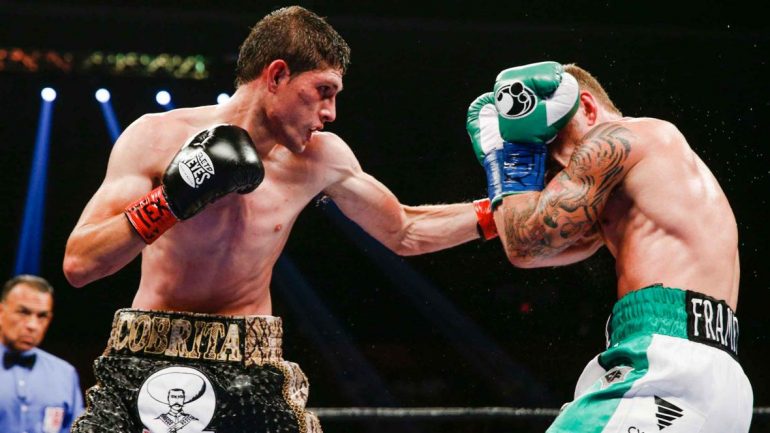 Alejandro Gonzalez Jr., a Mexican junior featherweight who followed in his champion father’s footsteps, was found dead in his hometown of Colonia González Gallo in Guadalajara, Mexico, on Friday.

Gonzalez, who carried the nickname “Cobrita” like his father, former WBC featherweight champ Alejandro Gonzalez Sr., was found dead along with two others inside of a Jeep – the murders were described as execution style – according to ESPN. He was 23 years old.

Gonzalez (25-3-3, 15 knockouts) turned pro in 2010 but made his name last year in El Paso, Texas, dropping Carl Frampton twice before losing a decision in a vie for the IBF junior featherweight title. Gonzalez failed to capitalize on his buzz, dropping a decision to Kerim Guerfi in November of 2015 and drawing with sub-.500 fighter Hector Esnar Bobadilla in October.

In the ring, Gonzalez’s style was reminiscent of his father’s, using his lanky 5-foot-7 frame to generate power while mixing it up inside.

Though his father never wanted him to box – preferring that his children played soccer instead – Gonzalez Jr. was captivated by his father’s wars with Luisito Espinosa and Kevin Kelley.

“My father is my model, my inspiration since my early childhood. I was born to be a boxer, being the son of Alejandro ‘Cobrita’ Gonzalez. I could not be anything else,” he told FightNews.

Luis Segura, a pro who had long trained alongside Gonzalez at the Azteca Boxing Club and Ponce De Leon Boxing Gym, was one of those devastated by the news.

“I still can’t believe it, it’s hard for me to understand that this is really happening to a close friend of the whole family, not just mine,” said Segura, the brother of former RING junior flyweight champ Giovani Segura. “It’s crazy; we just talked earlier about violence going on.”

Walter Sarnoi, another pro who trained with him, described Gonzalez as a “humble fighter who wasn’t scared to fight anybody.”