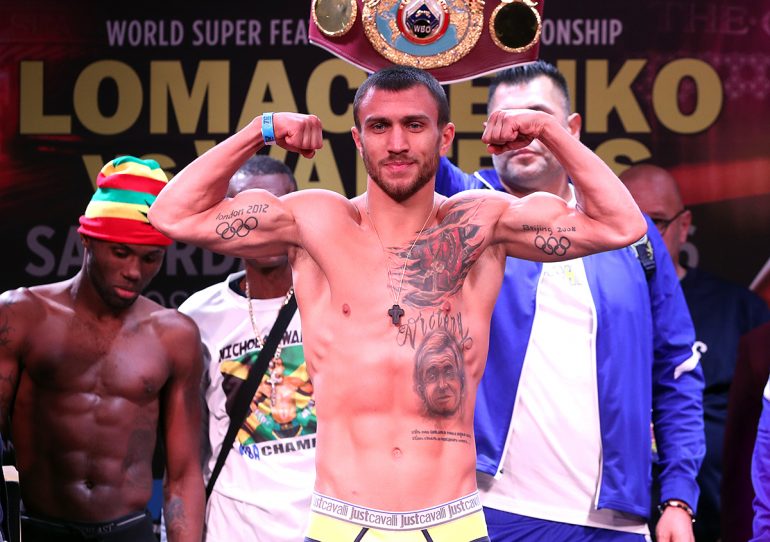 Vasyl Lomachenko toyed with unbeaten former featherweight titleholder Nicholas Walters before convincing the respected boxer-puncher to give up after seven rounds of futility on Saturday in Las Vegas.

Lomachenko (7-1, 5 knockouts), a 28-year-old amateur legend from Ukraine, retained his WBO 130-pound title without much resistance from Walters, who was expected to give him a fight. The super savvy southpaw almost resembled a cat playing with its tortured prey as he outworked, outmaneuvered and outclassed Walters (26-1-1, 21 KOs) during the HBO-televised bout from The Cosmopolitan.

By the end of Round 5, the two-time Olympic gold medalist/world amateur champion dropped his hands and posed in the center of the ring as if to dare Walters to crack him with his vaunted power. In Round 6, Lomachenko stifled any hopes of Walters staging a comeback by nailing the 30-year-old Jamaican with head-snapping left crosses. In Round 7, Lomachenko stepped up his aggression and began to put a beating on Walters. The former WBA 126-pound titleholder, who made his name with chilling stoppages of Vic Darchinyan and Nonito Donaire, lost his heart or his will to fight on after that round.

He blamed it on inactivity during his post-fight interview on HBO.

“One year without fighting,” said Walters, whose previous bout was a controversial draw against Jason Sosa last December. “You guys (HBO) only gave me one fight. He’s more active than me.

Walters will likely be ripped by hardcore boxing fans on social media but he was being honest with that statement.

Lomachenko gave Walters some credit during his post-fight interview.

“Walters is a good fighter, he’s really strong but I think he just stood there too much, which made it really easy for me,” said Lomachenko, who probably stood in front of Walters more than he needed to, but never neglected his excellent footwork, angles and lateral movement.

“It’s not about being strong or fast, you have to train (hard) and be highly functional in the ring.”

Lomachenko said he would like to face WBC 130-poind titleholder Francisco Vargas next, but admitted that his real goal “is to be No. 1 pound-for-pound.”

If the two-division titleholder has a few more performances like this one, especially if in a higher weight class or two, he’ll get there.