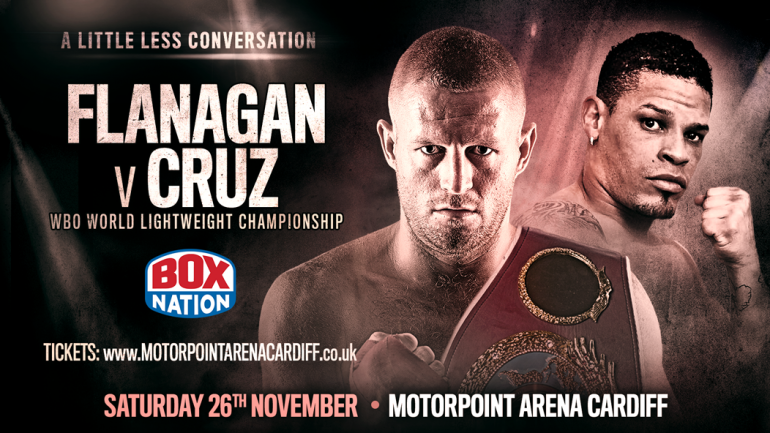 Flanagan, who is rated No. 2 by THE RING at 135 pounds, is coming off a one-sided unanimous decision victory over former junior lightweight titleholder Mzonke Fana. That bout was also held in Cardiff, in July, and the quick-fisted Englishman is eager to make up for what he felt was a luckluster showing.

“I’m excited to get out there again and put in a big performance before getting the blockbuster fights that (promoter) Frank (Warren) has promised me next year,” said Flanagan (31-0 12 KOs). “Last time I fought in Cardiff I wasn’t happy with how I boxed, so it will be good to show the Welsh fans that I’m a lot better than I showed against Fana.

“Frank’s delivered everything he promised. He got me a British title and a WBO world title. I got the opportunity to defend in my own town (Manchester) and then defend it in someone else’s back yard (UD12 Derry Mathews in Liverpool, England). I know I’m the best lightweight in the division and I’m looking to get these big fights to prove it.”

Cruz (25-4-1 13 KOs) was stopped in seven rounds by Orlando Salido when the pair contested the vacant WBO featherweight title in October 2013. He has, for the most part, been campaigning at junior lightweight since that time but the Flanagan assignment will be his debut at 135 pounds.

Go to www.boxnation.com to see how you can watch this fight and more live.

Quotes courtesy of a press release issued by Queensberry Promotions