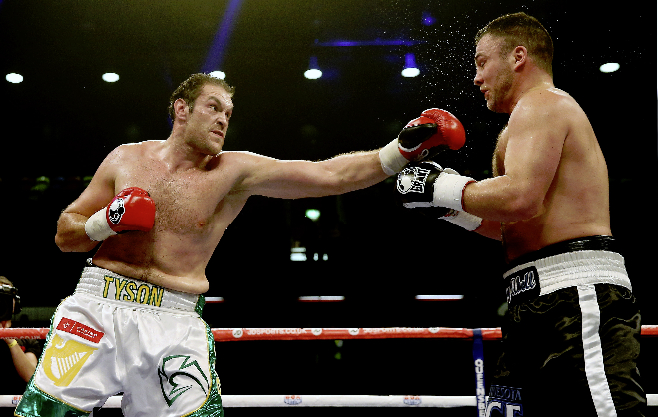 Since nothing he does is ever subtle, Tyson Fury unburdened himself on Monday of his personal demons, admitting he suffers from mental illness and abuses alcohol and cocaine, which he reportedly tested positive for last month, saying he does “lots of it.”

Fury has always cultivated an image of being somewhat deranged. He announced his retirement on Monday and then three hours later gloated that he had fooled everyone by saying he was not really leaving the sport. He’s also disparaged gays and women and pulled out of a rematch with Wladimir Klitschko twice, frustrating fans. It’s hard to feel sympathy for Fury when he seems to bring a lot of the problems onto himself.

But in a revealing and indulgent interview with Rolling Stone posted on the website on Tuesday, Fury, THE RING magazine, WBO and WBA heavyweight champion who dethroned Wladimir Klitschko last November in a massive upset, seemed to sincerely make an effort to set the record straight on his reckless and inexplicable behavior.

“They say I’ve got a version of bipolar,” he told the magazine, admitting he’s currently under hospital care and is receiving psychiatric help and has ballooned up to 290 pounds and has been sober only for the past three days. “I’m a manic depressive. I just hope someone kills me before I kill myself.”

Fury hasn’t trained since May, leaving his training camp in Holland because of bouts of depression. “From that day forward, I’ve never done any training,” he says. “I’ve been out drinking, Monday to Friday to Sunday, and taking cocaine. I can’t deal with it and the only thing that helps me is when I get drunk out of me mind.”

Fury reportedly tested positive for cocaine last month; his camp called off a scheduled Oct. 29 rematch with Klitschko, describing him as “mentally unfit to fight.” Fury seemed to deflect responsibility for a lot of his actions in the interview, saying while he suffers from mental illness, he’s also been the victim of racist treatment because of his Travelers background. But he was unequivocal about his cocaine use.

“I’ve done lots of cocaine,” he said. “Lots of it. Why shouldn’t I take cocaine? It’s my life isn’t it? I can do what I want. Yeah, I have done cocaine. Plenty of people have done cocaine as well. What the (expletive) has that got to do with anything? That ain’t a performance enhancing drug. Am I not allowed to have a life now as well? Do they want to take my personal life off me too? I’ve not been in a gym for months. I’ve not been training. I’ve been going through depression. I just don’t want to live anymore, if you know what I’m saying. I’ve had total enough of it. They’ve forced me to the breaking edge. Never mind cocaine. I just didn’t care. I don’t want to live anymore. So cocaine is a little minor thing compared to not wanting to live anymore.”

The British Boxing Board of Control plans to meet on Oct. 12 to determine if it should revoke his license. Fury, who could be stripped of his titles for the positive drug test, also has a hearing in November after the banned substance nandrolone was allegedly discovered in a June urine sample from a previous fight before Klitschko.