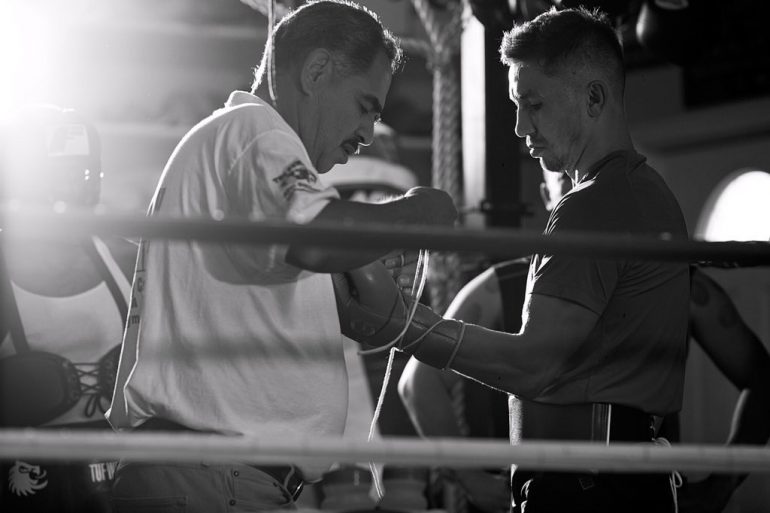 Fight night nears, and it is a different  Gennady Golovkin, but also the same animal who will glove up Saturday in England against “is he crazy or is he brave?” Kell Brook, on Brook’s home turf.

Golovkin trainer “Honest” Abel Sanchez told me his kid is ready to rumble same as ever. We should expect to see the patient dissector do his thing, which means kayoing yet another foe who maintains they aren’t THAT impressed by the skill set belonging to the Kazakh ass kicker.

The difference in the 35-0 masher is one of demeanor. Of late, the 34 year old has been a bit more edgy with his wording, direct, not confrontational but less sanguine than before. He’s not been contemptuous but it’s bordering on that when he mocks Canelo, and other 160 pounders, for not walking to match their talk.

“The fan support here in England is great. As for his recent talking, he is learning English and saying and understanding what he wants to say. Not thru a translator but from what he feels.”

So, might that directness translate into an even more direct version of 3G Saturday at the 02 in London? “No, I am a believer in discipline to your craft and what got you there.”

Me, I do wonder if maybe we see a KO on the early side. My thinking is, the 30-year-old Brook will learn right quick the power difference between GGG and 147-pound Jo Jo Dan, Frankie Gavin and Kevin Bizier. He might find himself in fight-or-flight mode almost right away, resort to wild-ish trading to try and repel the beastly bludgeoning, and get caught.

“I think that the realization experienced by all GGG opponents, once he touches them, it is something to see the expression change. Could Brook panic and trade and leave himself open? I think that depends on Brooks’ approach, GGG will take what you give him early, to size you up for later,” said the California-based trainer, winner of the 2015 Boxing Writers Association trainer of the year award.

Does Sanchez still think maybe the 36-0 Brit is the best GGG has faced on paper as a pro? “His accomplishments are best,” he stated, “his status is as the best welter in the division right now, to me it is clear, he is a very good fighter.”

We will know soon enough how Brook stacks up.

For certain, Sanchez said, GGG had a pleasant and focused Thursday. “He ate a late lunch after the press conference, he will jog a couple miles later today, go to sleep, rest for tomorrow. After lunch, he weighed 162.5,” he finished.

For the record, HBO is showing the GGG-Brook bout live, Saturday, with a 5:30 p.m. ET show start.

Talk to us, RingTV.com readers. Furnish your prediction in the comment section.