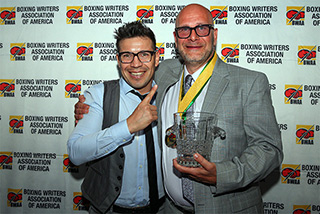 Now, DiBella and Martinez will try to do the same for undefeated junior lightweight Jon Fernandez, who will make his debut under the co-promoters in a Sept. 1 edition of Broadway Boxing at Foxwoods Casino in Mashantucket, Connecticut against Naciff Castillo (17-8-2, 5 knockouts).

DiBella announced the signing of Fernandez (8-0, 6 knockouts), as well as the former Puerto Rican amateur standout Jose Roman to exclusive long-term promotional contracts on Wednesday. Roman will also be appearing on the Sept. 1 card in Foxwoods against Khaaliq Core (0-1) in his welterweight pro debut. DiBella and Martinez’s MaravillaBox Promotions will co-promote the 5-11, 20-year-old Fernandez.

“Promoting Sergio Martinez was one of the highlights of my career,” DiBella said in a press release. “And I am proud to say that he and I have forged a lifelong friendship. Sergio told me that Jon is one of the best young fighters he has seen in a very long time, and I look forward to helping build the career of Jon Fernandez here in the States with my friend and great champion Maravilla.”

“For Jon to have the opportunity to sign with Lou at just 20 years old, an opportunity that I did not have until I was already 32, is amazing,” Martinez said in the release. “He has to take full advantage of it. Jon has to destroy everything that is put in his path and with time, patience and hard work, he will achieve greatness in this sport.”