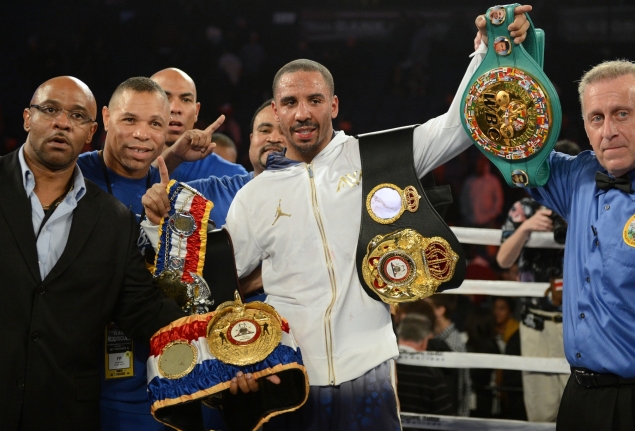 Andre Ward: The only thing that made Ward a winner after his unanimous-decision victory over Alexander Brand on Saturday night in Oakland is that it finalized his Nov. 19 showdown with Sergey Kovalev. The “fight” itself was nothing more than a workout, meant to remove any remaining rust after his hiatus from the sport. It served that purpose. Ward might’ve been wise to fight someone better than Brand in preparation for Kovalev, who is a dangerous threat, but the former 168-pound champ is essentially ready for the challenge. People love to criticize Ward. Many say he has no business on pound-for-pound lists given his recent inactivity in spite of his accomplishments and very little wear and tear on his 32-year-old body. I don’t agree – I believe he might be the best fighter in the world today – but I understand the critics’ sentiments. Some also didn’t like what they saw in the Brand fight, indicating he somehow should’ve been more dominating against a far inferior opponent. Ward (30-0, 15 knockouts) won virtually every second of every round; hence the shutout on the cards. That’s pretty dominating. I guess a knockout would’ve mollified some people but, with a few exceptions, that’s not Ward. He’s not a knockout artist; he wears you down and wins wide decisions. And the fact Brand (25-2, 19 KOs) is both durable and was focused more on survival than victory made it particularly difficult for Ward to stop him. I’ve said it before and I’ll say it again: Ward’s problem is that he’s a boring fighter – a great, but boring fighter. The Kovalev fight could end up looking a lot like the Brand fight, a superior boxer neutralizing a good, but overmatched foe. If that happens – and I think it will – then all this criticism of Ward will have been a complete waste of time.

We won’t know for a while how good David Benavidez (16-0, 15 KOs) truly is but so far so good for the 19-year-old super middleweight. The Phoenix product, Jose Benavidez’s brother, stopped Denis Douglin (20-5, 13 KOs) in the 10th round of his first 10-rounder Friday in Philadelphia. Benavidez can box and, obviously, he has power. And I’m impressed with his poise for such a younger fighter. I look forward to seeing him against a next-level opponent. … It will also be interesting to see where the likeable and exciting Juan Diaz (42-4, 21 KOs) goes from here. Diaz, the former three-time lightweight titleholder, seemed to be finished when he lost four of six fights between 2008 and 2010, after which he stepped away from boxing. He returned almost three years later – also at 135 pounds – and is 7-0 in his comeback against second-tier opponents in spite of shoulder surgery that sidelined him in 2015, including an eighth-round KO of Cesar Vazquez (27-4, 16 KOs) on Saturday in Tucson, Arizona. Now he’d like a shot at either young Puerto Rican star Felix Verdejo or the winner of the Sept. 24 Jorge Linares-Anthony Crolla fight for the RING championship. Another possibility is WBO titldholder Terry Flanagan. Diaz is still only 32 but obviously feels the clock ticking. “I don’t want another tune-up,” he said. “By the end of the year, October or November or December, I’d like to get a shot.” Only then will we know what Diaz has left.