Guillermo Rigondeaux: ‘Nobody wants to fight me’ 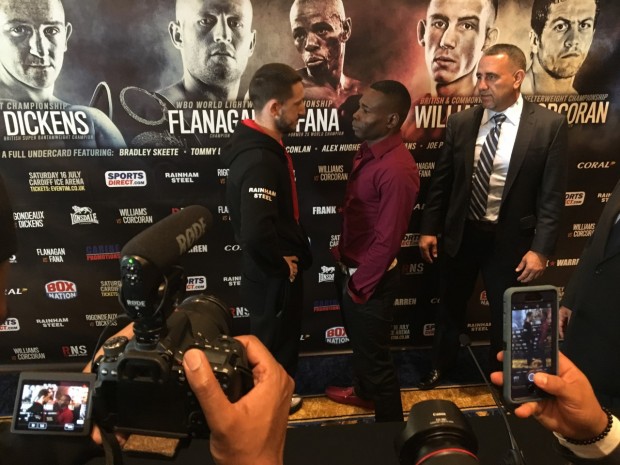 Originally, Guillermo Rigondeaux had been scheduled to defend his WBA junior featherweight title against James Dickens last March in the UK; however, visa issues curtailed those plans.

With those problems now resolved, Rigondeaux kept his word and will now face Dickens this Saturday at the Ice Arena in Cardiff, Wales on BoxNation. The broadcast begins at 6:00 p.m.

“Absolutely, I committed myself to fighting Dickens and here I am,” Rigondeaux told RingTV.com through Luis Fonseca of Caribe Promotions. “I trained; we’re ready to go for Saturday’s fight. I feel 100 percent. I’m prepared. I’m ready to fight. When I’m like this, when I feel this way, we’re ready to go.”

It could be legitimately argued that no active fighter is as widely avoided in the world of boxing as Rigondeaux.

The Cuban master is one of the most decorated boxers in the history of the amateur game, winning seven national titles, two World and Olympic gold medals.

Rigondeaux left the unpaid ranks and quickly made his mark in the pros. He’s a former THE RING magazine champion and current WBA junior featherweight beltholder, long considered the best in his weight class. Unbeaten in 16 outings and yet he’s still derided by fans and media alike.

With his 36th birthday nearing, his physical prime likely behind him, he still implores any of the other top names at 122 pounds to face him.

It’s clearly a bone of contention for the normally mild-mannered Cuban who defected to America in 2009.

Rigondeaux and his trainer Pedro Diaz feel Frampton and Leo Santa Cruz abdicated their 122-pound thrones, migrating four pounds north to pastures new and take their chances with each other, rather than meet “Rigo.”

Since turning pro, Rigondeaux, has stuck firmly to 122 pounds. Diaz is happy for his man to stay at that weight but says he would happily negotiate a fight at a catchweight of 124 pounds.

The highly esteemed Diaz previously worked on the Cuban amateur team for 15 years. Since making the transition to the pro game, he has worked with several big names, including Miguel Cotto, Jean Pascal and currently Rigondeaux, who he feels is the best Cuban boxer ever.

“Everyone knows Rigo is a classic fighter. All the media and the press and people in the business of boxing, they have tried to talk about Rigo to make it sound like Rigo doesn’t sell, doesn’t do a big show. It’s bureaucracy.

“Right now there’s three great boxing fighters: Floyd Mayweather Jr., Guillermo Rigondeaux and Andre Ward. Whoever speaks bad about Rigondeaux, I invite them to study boxing, study Mayweather, study Rigo and study Ward. I’m not saying there’s not other great fighters. There’s a lot of great fighters but, for me, if Rigo’s not the best, he’s the most complete.”

As for Rigo, he stays quiet but, not unlike another pound-for-pound star, unified middleweight titlist Gennady Golovkin, his goal is simple.

“I feel like I’m halfway,” he said. “There’s still more to do, clean (out) the division, get all the belts.”