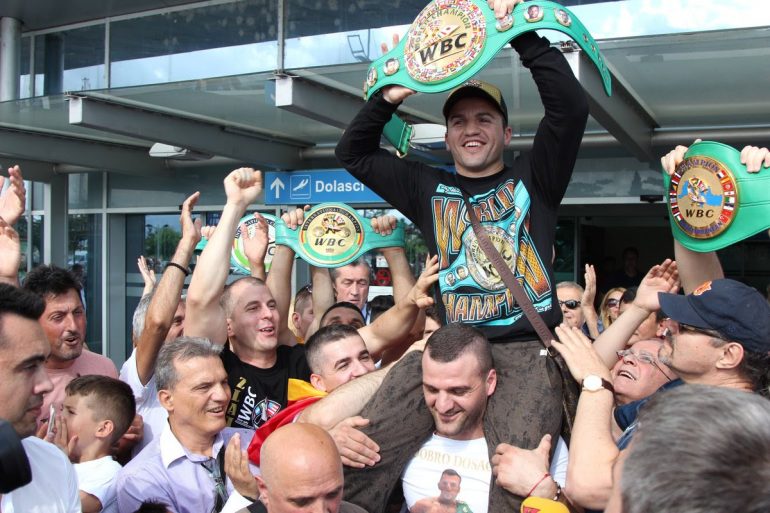 Having previously studied his Bolivian-born opponent, the hard-punching Zlaticanin (22-0, 15 knockouts) was confident of victory.

“I watched Mamani’s fights and I knew he goes to fight toe-to-toe and, with that style, I knew I will knock him out.” Zlaticanin told RingTV.com on Tuesday.

That hadn’t always been the case; originally the Montenegrin fighter had been scheduled to face Emiliano Marsili to fill the vacancy.

However, with less than two weeks notice, the Italian pulled out of the fight, leaving a bit of a scramble. Initially it left Zlaticanin – who prepared for his big opportunity in Long Beach, California, for 50 days – a little tentative.

“I was little nervous about that,” Zlaticanin said of facing a late substitute. “First (I) was supposed to be (facing a) southpaw, then (a) few days before the fight they changed to (an) orthodox opponent but I know, when I’m 100 percent ready, I can fight anyone, doesn’t depend if he’s orthodox or southpaw stance.”

The win saw Zlaticanin become the first Montenegrin-born fighter to win a major sanctioning body title in boxing. He is understandably excited about the prestige.

“That’s big honor for me,” he said proudly. “I dreamt about that green belt from my childhood. I’m very proud I’m WBC champion of the world.

“It’s (a) big honor for me and for my country; people in my country goes crazy and I make them proud. It’s the biggest success in Montenegro sport.”

Now the newly-minted champion has hopes of facing previous WBC 135-pounder holder Jorge Linares. Linares was due to face Zlaticanin – who was his mandatory challenger – until injury sidelined him for the first part of the year.

That left Zlaticanin waiting but he soon filled the vacancy when Linares was moved to “champion-in-recess” status.

However, it was recently announced that Linares will meet Anthony Crolla on Sept. 24. The WBC “diamond” belt, Crolla’s WBA title and the vacant THE RING magazine championship will all be on the line.

“I’m good with that fight,” he explained. “I would like to face the winner.

“Eddie (Hearn of Matchroom Boxing) says it’s (a) unification; it’s not. I’m WBC lightweight world champion and whoever wants my belt, he needs to come to me.”

Moreover, Zlaticanin anticipates enjoying his new status in his homeland.

“I’m going in Montenegro in two days,” he said last Tuesday. “The fact that this is the biggest success in the sport in my country tells you how I’m popular there.”

It certainly looks that way.