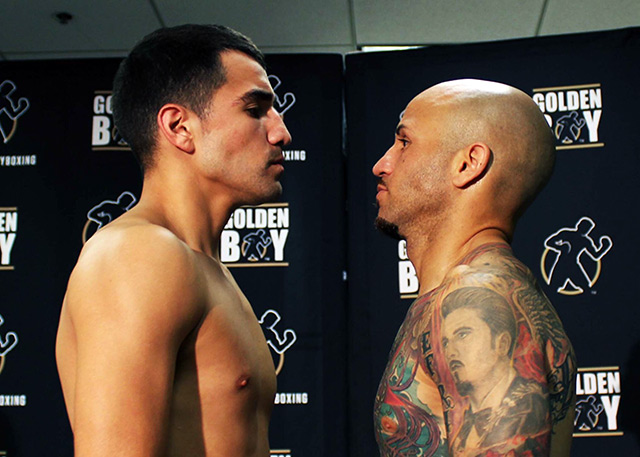 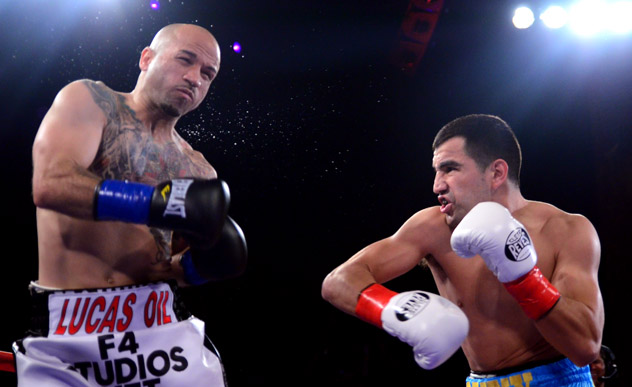 In what was scheduled to be the longest fight of the night but ended up being by far the shortest, featherweight Ronny Rios destroyed Efrain Esquivias by TKO just 37 seconds into Round 2. It was the main event of Golden Boy Promotions’ “LA Fight Club” at the Belasco Theater in downtown Los Angeles.

Rios (26-1, 11 KOs) of Santa Ana, California, was gunning for a knockout from the opening bell and just the sound of the first few impacts suggested it wouldn’t be long. The hopelessly overpowered Esquivias (17-5-1, 10 KOs) went down from a right hand in the opening round but mananged to escape.

He wasn’t so fortunate in Round 2, as Rios was in the middle of fusing Esquivias’ back to the ropes when the referee stepped in.

It was Rios’ first fight since a breakout performance in November of last year, when he unanimously outscored Jayson Velez in large part because of a dedicated body-attack. It’s safe to say the breakout continues, and now Rios finds himself looking at potential opponents in a Golden Boy stable that includes Joseph Diaz, Manuel Avila, Julian Ramirez and Abraham Lopez. The last two on that list will square off just down the road tomorrow night on the Francisco Vargas-Orlando Salido undercard. 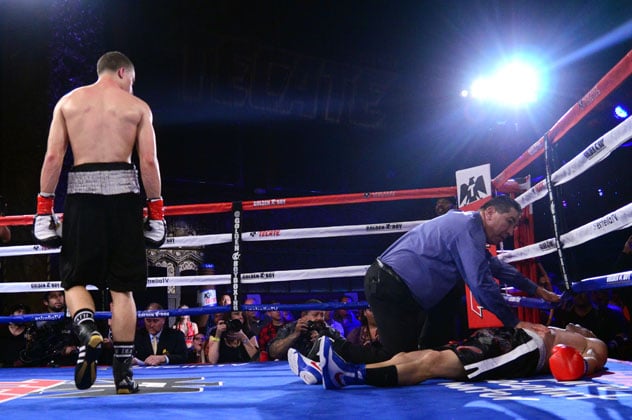 Round 1 was a perfectly fine opening round, but the pace of two men jabbing to set up power shots seemed snail-like after the all-action fights that had taken place earlier in the night. Ochoa, who made his ring-walk to the theme from “The Godfather” (ring announcer Joe Martinez even wiped away a tear), seemed to be landing heavier punches than the more jittery Gonzalez.

But Gonzalez didn’t seem OK with accepting his role as a stepping stone and it was a left hook from him in Round 3 that nearly scored a knockdown as Ochoa’s glove came questionably close to touching the canvas while he staggered sideways. Ochoa wasn’t harmed by the punch, though.

Into the middle rounds the rangy Ochoa relied mostly on jabs to set up straight rights – an effective if somewhat dull strategy – but Gonzalez’s attempts to push inside forced the occasional exchange. You could definitely sense the crowd’s attention wandering.

The eighth and final round began a little quicker, perhaps with both men looking to make some sort of final statement and then … Ochoa made a final statement. Gonzalez was about halfway through the thought of throwing a punch when Ochoa took a giant step forward and smashed a right hand into his opponent’s exposed face. Gonzalez went straight down and didn’t get up for a few minutes. No count needed. 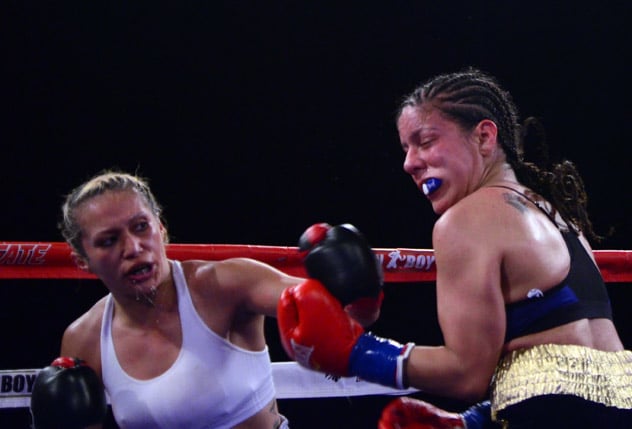 Favored East LA junior bantamweight Seniesa Estrada (7-0, 1 KO) overcame a surprise knockdown to beat Christina Fuentes (4-8-5) by a six-round unanimous decision in what turned out to be a contest with some blazing action.

Surprises seemed unlikely after two minutes as Fuentes looked shell-shocked by just one round of absorbing Estrada’s power. By Round 2 the Texan was in full survival mode and her punches looked more like signals for help than anything.

Just moments into Round 3, though, Estrada was suddenly on the canvas after Fuentes scored with a short right in the middle of a two-way flurry. Fuentes may have been the most shocked of anyone, as a moment passed before she jumped forward and launched another punch at the still-down Estrada. She lost a point for the foul, which canceled out the one she’d gained with the knockdown.

When action resumed, a re-engergized Fuentes charged forward at what she clearly hoped was a buzzed Estrada. She didn’t get what she wanted, but the crowd certainly did as the fight from that point on was a non-stop series of power exchanges. Estrada didn’t repeat her lapse, however, and her superior accuracy and ability to craft wicked combinations preserved her undefeated record. Scores were 59-54, 59-54 and 58-54

To kick off the night, local favorite Tenochtitlan Nava (2-0), 22 years old, concentrated on left hooks to the body of his 43-year-old opponent, David Montes (0-3) from El Paso, Texas, on his way to a ritualistic four-round unanimous decision win. The young junior lightweight looked raw but threw a lot of punches and obviously had the will to entertain the T-shirted cheering section he brought.

In the second undercard bout, a fast-paced junior featherweight bloodfest, Pablo Rubio Jr. scored a unanimous decision over Jorge Perez by scores of 60-53, 59-54 and 59-54. Perez (2-3, 1 KO) from Riverside, California, came out swinging aggressively but was the one bleeding by the end of Round 1. After losing a point for head-butting at the start of Round 2, the hemorrhaging increased as the more accurate and more creative punches from Rubio (6-0, 3 KOs), who fought with the support of his fellow Angelenos, did more damage. The very game Perez absorbed some hellacious uppercuts in the sixth and final round but kept hammering away even while leaking copious amounts of gore on Rubio’s neck, shoulders and back. He fought hard and finished on his feet, which is more than can be said for his mouthpiece, which hit the splattered canvas three times.

With the canvas thus baptized, another entertaining fight broke out between featherweights Rafael Gramajo (7-1-1, 2 KOs), a local fighter, and Harold Reyes (2-5-1), of Puerto Rico. Gramajo pressed forward throughout the fight while the more mobile Reyes spent much of his time fighting in reverse. Whenever he was able to press Reyes into the ropes, however, Gramajo ate plenty of flush shots for his trouble and some great exchanges occurred. In the end the judges favored Gramajo’s more selective and more damaging punches and scored the fight 59-55, 59-55 in his favor.