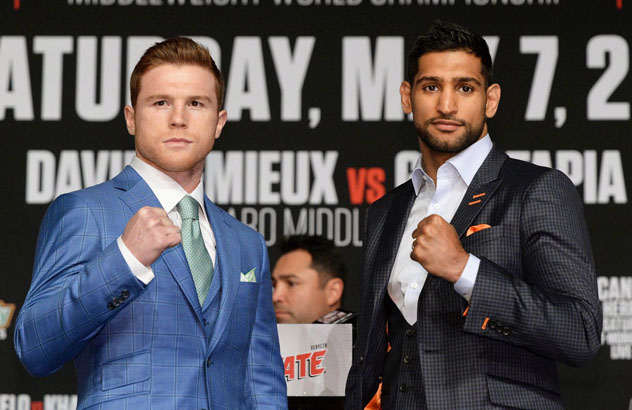 It’s been three months since the announcement nobody saw coming that Canelo Alvarez would be facing Amir Khan at the brand new T-Mobile Arena in Las Vegas for Canelo’s RING, WBC and lineal middleweight championship at a catchweight of 155 pounds. It blindsided even the staunchest boxing pundits and injected some excitement into the sport when it was least expected.

However, after the honeymoon of the announcement wore off, the fight was met with some criticism due to what is expected to be a significant weight advantage for the champion. Meanwhile, others were intrigued by the idea that two of boxing’s bigger names would square off on Cinco De Mayo weekend.

But with just a few days until Canelo and Khan step into the ring, the gravity of the moment is beginning to be felt by both teams. For Canelo, this is his opportunity to claim the Mexican holiday now that Floyd Mayweather Jr. has retired. He’s expected to win, and that could be placing some added pressure on the young fighter. But you won’t be able to tell by the look on his face. He’s seemingly unaffected by the magnitude of the event. His stone face offered not a single tell as he spoke at the podium during the final press conference.

“Khan is a very fast, very elusive and very tricky fighter,” Canelo (46-1-1, 32 knockouts) said. “But I am happy with the work I have done and I am ready to go in the ring and break him down.”

For a moment, he appeared to feign excitement but his delivery remained subdued.

The exclamation point may be unnecessary given the almost too relaxed demeanor. But he plans to deliver all of the punctuation on Saturday by taking out Khan.

Meanwhile, Khan (31-3, 19 KOs) has been chasing a fight of this caliber for quite some time. After being shunned by both Mayweather and Manny Pacquiao, his time has finally come. Granted, the concessions he had to make in weight could spell out his demise. However, the rewards a victory would bring certainly balance out the risk.

“On Saturday you will see the best of Amir Khan,” the former titleholder said. “Canelo is a great champion who is dedicated to the sport of boxing, but it is my time and I’m going to grab it with both hands. It’s been my dream to hold a great fight like this in Las Vegas.”

Khan has finally arrived, but that is only half of the equation. For years, fighters have found themselves in a similar position but were unable to seize the moment. And the fall from such a lofty position has often left fighters shattered. But Khan has pulled himself from the clutches of defeat before and has proven to be resilient.

“(Amir) has been through so much in his career with adversity but here he is willing to step up two weight classes and then some to prove he got in to this sport to show he has a legacy and fears no one,” Khan’s trainer, Virgil Hunter, said. “He will walk right in to the face of adversity and it is a pleasure to be right beside him when he walks right in to the ring on May 7.”

This will quite literally be the biggest challenge of Khan’s career and he has plans to rise to the occasion. Although he is a significant favorite, Canelo doesn’t plan on taking this fight lightly because one punch can change everything in the blink of an eye. And considering how many times Khan has bounced back after being counted out, that makes him a dangerous opponent with little-to-nothing to lose.

There are no guarantees regarding the outcome of Saturday’s fight. But all surprises are certainly welcome.