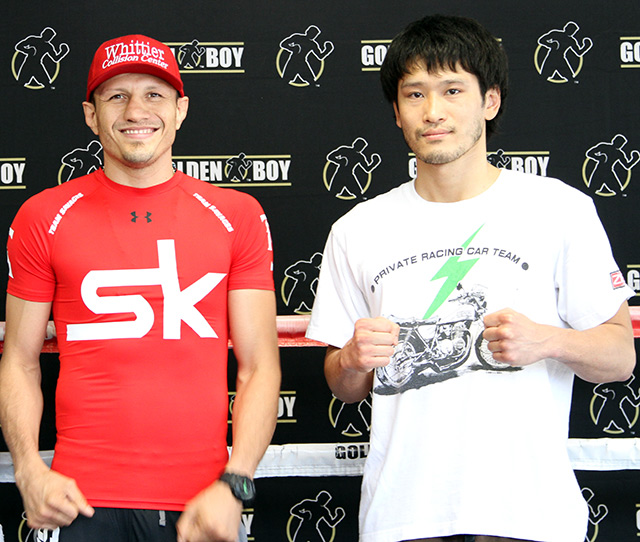 Few matchmakers take as much pride in making a fan-friendly fight – be it a four-round prelim bout or a 12-round championship – as Golden Boy Promotions’ Roberto Diaz.

The veteran insider pays attention to the kind of fights that jaded boxing writers and hardcore fans – two groups that include a lot of what hall of fame fight scribe Michael Katz used to call “blood-thirsty ghouls” – often clamor for and he’s confident that Friday’s “LA Fight Club” main event between Jesus Soto Karass and Yoshihiro Kamegai will deliver what they want: sustained, violent action.

“I’ve been trying to make this fight for three or four years,” Diaz told RingTV. “It has all the ingredients of a fight-of-the-year candidate. It’s a fight that excites me as a fan, it excites me as a matchmaker. I just want to see it.”

He’s not alone if social media and ticket sales are any indication. The Belasco Theater, the downtown Los Angeles home of the LA Fight Club series, quickly sold out after the main event was announced. An additional ballroom was opened (where really hardcore fans can view the fight on a large TV screen in a plush lounge setting for $10) to accommodate the high demand.

The reason for the frenzy among L.A. boxing fans is simple: the 33-year-old gatekeepers come to fight. Soto Karass (28-10-3, 18 knockouts), who hails from Los Mochis, Mexico but has lived and trained in Southern California since 2003, has gone from prospect to journeyman to gatekeeper to contender and back to gatekeeper status during his 15-year pro career. The one constant is that he’s been entertaining against too many unbeaten up-and-comers, top-10 contenders and fellow gatekeepers to name. 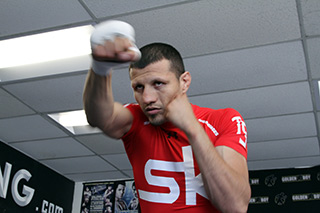 But some of his more memorable slugfests and shootouts came against David Estrada (who he stopped in eight round in 2008), Carson Jones (who he outpointed in 2009), the first fight with Mike Jones (who he lost to via majority decision in 2010), Marcos Maidana (who stopped him in eight in 2012), Andre Berto (who he stopped in Round 12 in 2013) and Keith Thurman (who stopped him in nine in 2013).

“Jesus Soto Karass, he’s one of those fighters that guarantees spectacular performances,” says Diaz. “I’m not saying he’s the most technical (boxer). We know he’s not. He can be. Selcuk Aydin, he outboxed him. But he loves to mix it up, he loves to go toe to toe.

“You can never count a fighter out like Soto Karass, the Mexican warrior who’s coming with everything. They counted him out against Berto, and look (what happened). He rocked Keith Thurman (in the first round). He knows this (fight, against Kamegai) is make or break.”

Kamegai (26-3-1, 23 KOs), from Tokyo, Japan, has fought in the U.S. six times and has always given 100 percent in entertaining bout. In his first U.S.-televised main event (on Fox Sports 1) in October 2012 he battled tooth-and-nail with Tijuana’s Jorge Silva en route to a 10-round majority draw. In his next U.S.-televised main event, against Robert Guerrero in June 2014, he pressed the former multi-division titleholder to the limit in a brutal 12-round battle. Kamegai lost a unanimous decision but earned the respect of the hardcore fans who tuned into the Showtime broadcast. 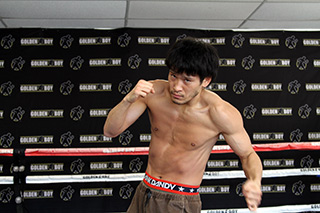 “Kamegai, I saw him many years ago in Japan years ago, and I was amazed with his boxing,” says Diaz. “Normally Japanese fighters come straight forward and want to go toe to toe, but I saw something different from Kamegai, he was more of a counter puncher.

“Then he gets out here (the U.S.) with Robert ‘The Ghost’ Guerrero, with ‘Pantera’ Silva, these were fights that were wars from round one on to the distance. It was just bang ’em, back and forth. He had Guerrero hurt badly.”

Kamegai is expecting the same kind of grueling distance fight that he had with Silva and Guerrero on Friday.

“My first thought when this Jesus Soto Karass was mentioned as an opponent for me was that it would be a hard, tiring fight,” Kamegai said through translator Nobu Ikushima of Teiken Boxing, which co-promotes him with Golden Boy Promotions.

However, although Kamegai appreciates the fans he has in America, he doesn’t want to be known as a face-first slugger. He says he works on his technique and defense in training and at least tries to avoid punches during his fight.

“I don’t want to get hit,” he said during Wednesday’s media workout at Westside Boxing Club in L.A., “but if I have to get hit in order to win a fight, I will.”

Kamegai knows that Soto Karass shares that same willingness to walk through fire if need be. It’s that willingness, he says, that connects Japanese boxers with boxers from Mexico.

He doesn’t believe in cultural/national stereotypes when it comes to boxing styles – such as all Mexican and Japanese boxers are pressure fighters or sluggers – but he says the warrior spirit of both cultures cannot be denied. 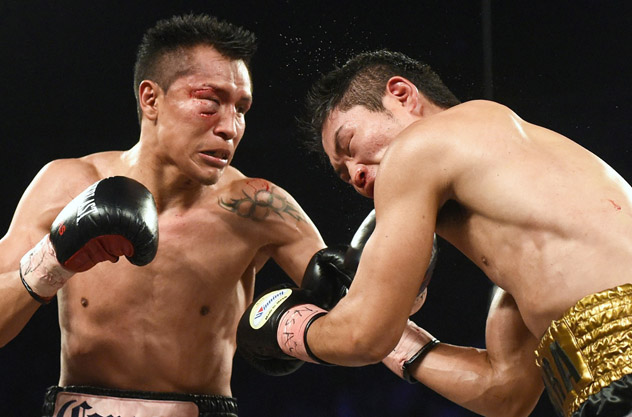 Mexico vs. Japan: Francisco Vargas and Takashi Miura combined to make the 2015 Fight of the Year. Photo by Naoki Fukuda

“Heart is what we both bring to the ring,” Kamegai said of himself and Soto Karass. “Mexican fighters come in all different styles, from Julio Cesar Chavez to Rafael Marquez to ‘Finito’ Lopez, but they all had heart. So do Japanese fighters.”

Soto Karass, a happy-go-lucky sort who is as at home drinking beer with fans as he is punching it out in the ring, seems to be OK with ethnic boxing stereotypes.

“Everyone knows Japanese fighters are warriors, just like us Mexican fighters,” he said through translator Julio Robles, one of his conditioning coaches with Team Savages.

Both veterans claim to have been in the gym since the start of the year (and both sported impressive physiques at Wednesday’s media workouts). Both say they’ve received excellent sparring from young, strong and fast up-and-comers during their respective camps – Kamegai’s took place at the Teiken gym in Tokyo; Soto Karass’ at the Santa Cruz Management gym in Montebello, California – and both former welterweights believe that fighting at the junior middleweight limit (154 pounds) will only add to their stamina and durability.

All of which suggests that diehard fans will get what they hoped for when they tune in to the Estrella TV broadcast or various online streams (available on RingTVLive.com, FilmOn.com, YiPtv.com, estrellaTV.com and on YouTube via Fenomeno Studios: youtube.com/FenomenoStudios). The RingTV live stream will begin at approximately 5:30 p.m. PT through 7:00 p.m.

“I get a lot of Tweets from the fans, ‘Hey make this one, make this one,’ and [Soto Karass-Kamegai] was one that kept coming up,” said Diaz. “The media was like ‘Oh, if we could only see this fight.’ That’s why it’s special. Jesus Soto Karass-Yoshihiro Kamegai. I can’t believe it’s almost here.”