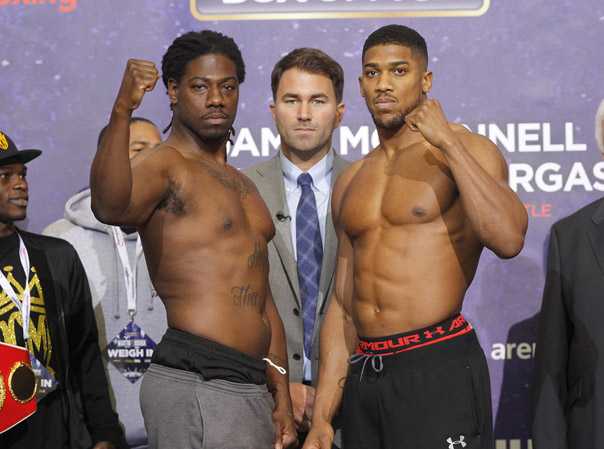 Joshua, the 2012 London Olympic gold medalist, who is rated No. 8 by THE RING, is the hot favorite to prevail on Saturday night and weighed in at 244 pounds. Martin followed to a chorus of boos and was 1 pound heavier at 245.

Both men looked to be in excellent fighting shape and engaged in a prolonged conversation after the official numbers were revealed by master-of-ceremonies Michael Buffer.

“It’s a pleasure to bring big time boxing back to the U.K.” said Joshua when interviewed by Sky Sports afterwards. “I see myself outclassing (Martin) to be honest with you. I’ve come in light for this fight and I feel loose.”

Martin, who is also unbeaten at 23-0-1 (21 knockouts), is a powerful southpaw who at 6ft 5 can certainly match Joshua for size. The American captured the vacant IBF title in January when he scored a third-round stoppage of Vyacheslav Glazkov, who was forced to retire from the contest with a knee injury.

“I just won this belt and I ain’t done having fun with it,” said Martin, who is rated No. 9 by THE RING. “We’re ready to get all up on Joshua’s head come tomorrow. The heart of this man is what is going to win this fight.”

The IBF title was stripped from Tyson Fury when the Englishman refused a mandatory assignment against Glazkov in favor of a rematch with Wladimir Klitschko, whom he outpointed last November.

It was confirmed earlier today that Fury will now defend THE RING, WBA and WBO titles against the Ukrainian on July 9 in Manchester, England.