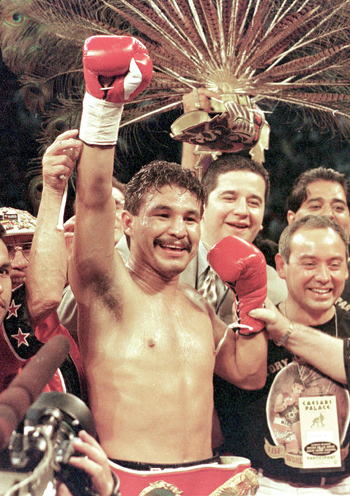 Luis Ramon “Yory Boy” Campas is one of only a handful of modern day fighters to have reached 100 professional wins. The pinnacle of the heavy-handed Mexican’s career came in the late ’90s when he held the IBF junior middleweight title.

He was born in Navojoa, Sonora, close to 400 miles south of the U.S border. His brother Frankie was the state champion, but along with their father both prohibited “Yory Boy” (meaning light skinned) from boxing. However, boxing was in his blood and he used to sneak to the gym when Frankie wasn’t training. Campas had 57 amateur fights – all wins. He turned pro at 15.

On his way up Campas was famed for his fighting style and his ring entrances. Campas wore a headdress and would step into the ring after a man wearing antlers did a “Deer Dance” to ward off evil spirits and bring good fortune.

He won his first 56 fights, 50 by knockout, collecting the Mexican and then NABF titles at 147 pounds. Campas was rated highly by the main sanctioning bodies but had to wait until September 1994 for his first world title opportunity when he took on a rising Felix Trinidad.

Both men threw heavy punches from the opening bell. In the second round Campas landed a short crisp left hook that deposited Trinidad on the canvas. However, not for the first or last time, this served as a wake-up call for Trinidad who came back strongly, landing several hard shots, all of which the Mexican native took. A fusillade of punches rocked Campas’ head back and sent him to the ropes, where referee Richard Steele jumped between both fighters to stop the fight late in the fourth frame.

Over the next two years Campas worked his way back into title contention, challenging the hugely underrated Jose Luis Lopez, the WBO welterweight titleholder at the time. Lopez fought terrifically and forced Campas to retire at the end of the fifth round.

Unperturbed, Campas migrated to junior middleweight and won four fights over the next year to set up a meeting with unbeaten 1992 U.S Olympian Raul Marquez. The fight was finely poised until Campas broke through in the eighth round, forcing the stoppage, in what he says was his best win and his proudest moment in boxing.

He made three successful defenses against the seasoned trio of Anthony Stephens, Pedro Ortega and Larry Barnes, the later coming on the undercard of Oscar De La Hoya-Julio Cesar Chavez Sr. II.

A year into his reign Campas lost the IBF strap against Fernando Vargas, when he retired at the end of the seventh round.

He continued to fight over the next four-and-a-half years, going 8-2 – the losses coming against another snake-bitten 147-pound contender, Oba Carr, and versus Daniel Santos in an unsuccessful WBO 154-pound title bout – when he was selected to face WBA/WBC champion De La Hoya. Campas was stopped late in the seventh round, a TKO he remains unhappy about that bout to this day.

That was the last time Campas would contest a world title fight, however. He has remained active since, winning some, losing some. He is listed as 105-17-3, 81 knockouts on boxrec but his manager Joe Diaz says his record is actually 111-17-3 with 82 KOs.

During their 12 years together Diaz has gotten to know Campas and his family well.

“Everywhere that I go, the whole town stands behind Campas,” said an impassioned Diaz. “All the old Spaniards have settled in Navojoa, they all know the family and they all say, “Joe, you picked the right guy, he’s an honest boy, he’s never caused any problems, never took a drug, no tattoos. I’ve been with him 12 years, he’s like an adopted son.”

The Mexican is well known in Three Forks, Montana, where he has lived there off and on for three years at Diaz home, using it as a training base.
ÒÇÇ
On Saturday, Campas will bring the curtain down on his 29-year career when he steps in the ring for the 132nd time against former Contender alum Anthony Bonsante.

“I hope to retire Campas with decent money,” Diaz said. “I have a lot of investors who want to help him. Everybody wants to help this man.”

The 44-year-old is married to childhood sweetheart Mabel. The couple have three children. ÒÇÇ ÒÇÇ

He agreed to speak to RingTV.com about the best he faced in 10 key categories.

BEST JAB
Jose Luis Lopez: Because I felt it, he pressured me with the jab, he had a lot of movement. He won, he was a good boxer, aggressive, a counterpuncher, he did a lot of things that I didn’t have the skills to beat. That’s why he won. I still remember feeling his punchers. 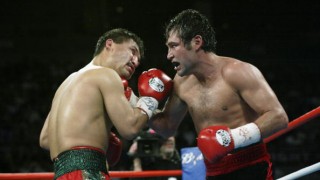 BEST DEFENSE
Oscar De La Hoya: He was loose, he had good movement and he could block punches. With Lopez, he didn’t have the defense but you couldn’t hurt him, the shape he was in.

BEST CHIN
Raul Marquez: He could take a lot of punches and it didn’t faze him.

FASTEST HANDS
De La Hoya: He was more rapid than anybody.

FASTEST FEET
Daniel Santos: Because all he did was run [laughs]. He was here, he was there, he was like a rabbit.

SMARTEST
Felix Trinidad: Very intelligent in the ring. He made all the moves. I knocked him down [in the second round], Trinidad thought about it and changed his tactics. 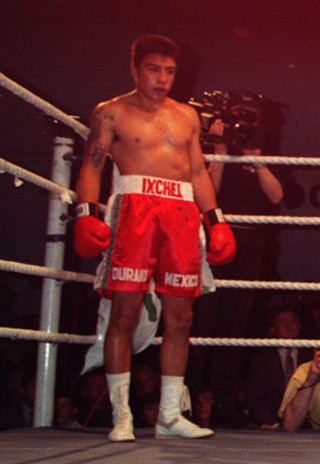 Lopez: He could take the punches and he kept pressuring. His punches were harder than any other punches I took from anybody else to this day.

BEST PUNCHER
Lopez: He has the experience, he had everything over me at that time. De La Hoya has no punch.

BEST SKILLS
Lopez: He was a complete fighter all around, not only power, he had skills. Trinidad’s father took care of him, De La Hoya because he’s American, he had people watching over him but Lopez was left to the wolves, his diet, drugs all this stuff destroyed this man’s career.

BEST OVERALL
Lopez: Pressure-wise, the best, taking punches, they didn’t faze him, the hardest I’ve ever been hit was by Lopez. How come De La Hoya refused to fight Lopez? Because Lopez was the best.