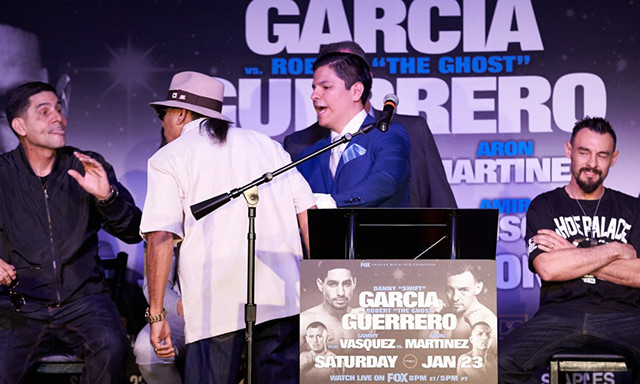 Before the press conference began, and while everyone was still chewing on their complimentary sandwiches, Ruben Guerrero, father and trainer of Robert, caused a ruckus as Angel Garcia, Danny’s father and trainer, arrived with his son into the Conga Room – a lounge just outside of the Staples Center where the event takes place. The only thing surprising about the ordeal, is that it took this long to finally occur. While it wasn’t clear what expletives were said and instigated by Guerrero, the two were separated before any serious finger pointing led to a shoving match.

The presser started shortly after the kerfuffle, and it was there each man had their chance to speak their mind at the microphone.

“I wish it was here today,” Ruben proclaimed. “We’re ready. Now it’s time to fight. It’s gonna be a bloody fight, and it’s gonna be a rough fight…Same thing what happened to (Andre) Berto, his dad better be ready to throw that towel in, because you know what? He’s gonna be crying in that damn corner.”

Angel could be seen resting his head on Danny’s shoulder – mimicking a nap – while Guerrero talked his talk. It didn’t take long for Ruben to direct his attention to Angel, and start the finger pointing again.

“C’mon, I’ll let you have the first punch,” Ruben said before calling him a little girl and proclaiming he didn’t know Spanish as a Puerto Rican. The only real reaction Angel while he waited for his turn on the stage was, “Don’t worry about me, worry about him,” as he gestured to his son. Then, Angel eventually got up as Ruben drew closer, and that’s when Ruben proceeded to give him a faux slap that just grazed his cheek. It called for a handful of people to rush the stage, and their timely arrival made it seem anticipated. After they were separated, and while Ruben was helped back to his chair on the stage, he said, “Hey, let me finish my speech!”

He did, and Ruben’s time at the podium lasted the longest even though the first words he spoke into the microphone were, “I wanna make it short.”

“Well, my dad said it all,” Robert said when it was his turn at the mic. “We’re ready to go. We trained hard. Did everything we had to do. Nothing to it now but just to do it. I’m excited about this fight. We’re gonna take care of business. Just like my father said, ‘Suertas los gallos.’ It means, ‘let the roosters go’ – it’s time to fight.”

Guerrero (33-3-1, 18 KOs), made it short and sweet and without any disrespect towards the Garcias. A former title holder in the featherweight and junior featherweight divisions, this is now Guerrero’s third try at attaining a welterweight title.

“First of all, Danny had a great camp,” Angel said, as he was next. “Beautiful camp, no injuries, he had great sparring at 147. It’s a new beginning in his life. He’s the new man in town. Ruben said his son his coming out to fight – no doubt in that. It’s boxing, he’s supposed to come to fight.”

He went on about Ruben’s antics, and when he was finished, did his entire speech in Spanish afterward saying, “Now for that Puerto Rican who can’t speak Spanish, I’m gonna do the press conference in Spanish.”

Last at the mic was Garcia, and just like Robert, he made it short and sweet, but ended his commentary with some strong words. “I had a tremendous camp. I’m excited to be fighting at this level once again in my career. I haven’t felt this way in a long time. It’s just the feeling you get when you know you’re gonna perform great, and I want to thank Ruben for making me feel that way because he just has awakened the devil, basically.”

Afterward, Danny and Angel Garcia, as well as Robert Guerrero, spoke with ringtv.com.

“First of all, I believe in God. Pray every night. I love God,” Danny said when asked to elaborate on his final words. He continued, “Without God I wouldn’t be here. He’s the highest power in the world. Biggest energy in the world. Controls everything from humans to a seed becoming a plant. It’s a just a quote I said. I haven’t felt this way in a long time as far as my intensity. I just needed something to fuel me. That’s all I needed was somebody to just wake me up and give me that extra boost, and He did it.”

The former 140-pound champ then went third-person saying, “Danny Garcia is a dangerous man when he feels that way.” When asked if the plan is to shut Ruben up, Danny, replied, “Yes sir.”

Garcia (31-0, 18 KOs) gets his first crack at a welterweight title in his second fight in the weight class. “I always guarantee a victory,” Danny said when asked if he guarantees a win. As for what he will do with the WBC title after he wins it, Danny said, “I’m gonna do the same thing at 140. One at a time, one belt at a time, and then unify the division.”

“At the end of the day, that s__t don’t put no fear in my heart. That s__t’s nonsense. To me anyway,” Angel said when asked about Ruben’s antics. “When you threaten somebody and smack somebody in the face, I’m gonna take you very seriously. If he thinks he offended me, he really offended Danny. His son gotta see Danny Garcia. So if he’s training his son to fight me, he’s fighting the wrong guy. Like Danny said, he woke the devil up. You can’t say it no better that. It might not sound like a good thing to say, but when you’re angry and people ask you why you did it. You say, I don’t know the devil made me do it.”

Inquired about what he’d like to see his son do with the WBC welterweight title once he wins it, Angel said, “Whatever the WBC wants to do, and whatever Al (Haymon) wants to do.” As far as what fighter he thought would present the biggest challenge for his son when asked, he answered, “Well, the big man is retired,” referring to Floyd Mayweather Jr. He continued, “Honest to God with you, we’re gonna worry about Guerrero, and then, I can’t really say anybody because to me, I gotta say Danny Garcia.” This writer questioned back, “So if Danny could fight himself, he’d be the biggest challenge for himself?” Angel replied, “Exactly. Because right now, all them guys don’t have Danny’s resume. (He) cleaned a whole division out, and still didn’t get props.”

The names of Manny Pacquiao and Timothy Bradley Jr. were brought to Angel’s attention as challenges, albeit hypothetically, and Angel said, “Well, it would be a good fight, with either or, but the thing is right now they’re clashing heads with PBC. So it’s not even worth talking about it.”

Robert was gracious enough to take time out for a few questions as he was already outside the Conga Room in the L.A. Live terrace. “Who knows? We’re planning to go and win this world title,” Guerrero, 32, said about whether this could be his last shot at a world title. Regardless of this upcoming fight, Guerrero said he’s content with the accomplished career he has put together. “Most definitely. It truly has been a blessing. How far I came, and how many titles I won, how many divisions I’ve been through, and what I’ve done so I’m very happy. It’s time to just set up the rest of my career and leave that legacy.”

The man in his way of becoming a world title holder in three weight classes, Garcia, 27, has had close fights despite his unblemished record. “I think everything is well-deserved. He did his thing, and you can’t take nothing from anybody,” Guerrero said about Danny’s close, and often disputed bouts. “You gotta give credit where it’s due. He’s undefeated. World champion at 140 pounds, and now he’s up at 147. Had his first fight there and got the victory. So everything is well-deserved.” When finally asked about the shenanigans his father conjured, Robert admitted, “Yeah, I knew it was coming. They said some things in the media that rubbed my dad the wrong way, and if you light that fuse it’s gonna pop.”