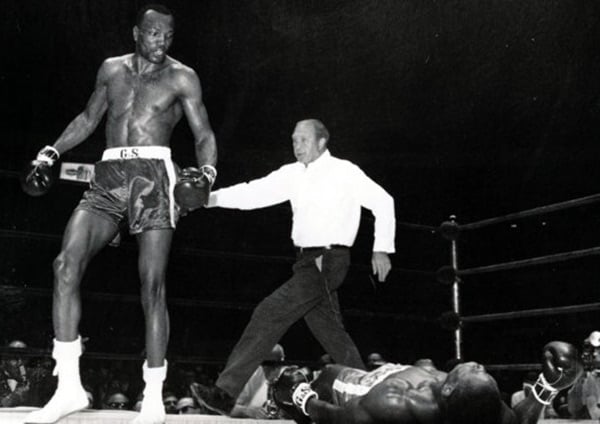 The Albuquerque, New Mexico native, who was inducted into the International Boxing Hall of Fame in 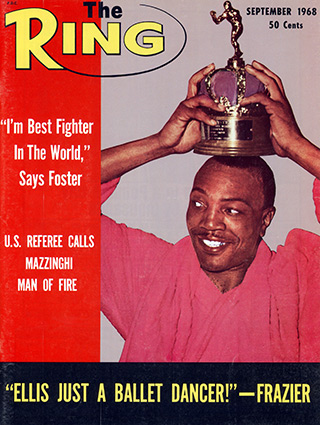 1990, is regarded as one of the greatest light heavyweights of all time and one of the hardest punchers boxing has ever witnessed.

Foster, a rangy 6-foot-3 boxer-puncher, was a wrecking machine of a light heavyweight champion. He made a then-division record 14 defenses in his six-year reign of terror, scoring 10 stoppages (often of the chilling KO variety).

At 175-pounds he was untouchable. His loses were against heavyweights when he looked to challenge himself on the way up and later when he fought the legendary pair of Joe Frazier and Muhammad Ali, both of whom he enjoyed moments against.

“We were all friends, this is all business,” Foster told RingTV.com last summer prior to his passing. “There was no big money in my division, I could make a $100,000 but them guys were making $300,000… I told Ali and Frazier, ‘Give me a chance to make that big money’ and they did.”

At light heavyweight he toiled in obscurity, too good for his own good, unable to get a title shot until 1968, when he finally got his opportunity facing Dick Tiger. He describes it as his proudest moment and best performance in boxing.

“I had been trying for years to get a shot at the title, nobody would fight me,” he said. “I got some people I knew in Washington who had a construction company to put money up for me to fight Tiger. They put up $100,000 for Tiger. I didn’t make no money off that fight, my purse was $60,000 and I had to give it back to the guys who put the money up for me to fight Tiger.”

Foster became the only man to knock out Tiger, demolishing the Nigerian in the fourth round. During his championship tenure he knocked out the respected trio of, Vicente Rondon (TKO 2), Mike Quarry (KO 4) and Chris Finnegan (KO 14) in THE RING’s 1972 Fight of the Year.

He attributes much of his success to his jab.

“I had the best jab in the business,” he proudly boasted. “My trainer used to put one-pound weights in my hands when I done my roadwork. I’d do three, four miles and I just kept that left jab pumping with that weight in my hand. Today my left shoulder is bigger than my right shoulder. I had a lot of power, if I didn’t knock you out I’d bust you open within 15 rounds.”

Foster (56-8-1, 46 knockouts) retired after drawing with Jorge Victor Ahumada in his final title defense in 1974. He made a comeback a year later but retired for good after losing in 1978.

When assessing the light heavyweight division today he admits Sergey Kovalev may have given him some trouble before quipping: “If I was 50 years younger, I’d have knocked out Roy Jones [Jr.], [Bernard] Hopkins, [Adonis] Stevenson and Kovalev!” (Laughs)

After his boxing career Foster became a deputy sheriff in Bernalillo County, New Mexico. Foster was survived by his wife and four children. He also had 10 grandchildren and 26 great grandchildren.

Foster kindly agreed to speak about the best fighters he fought in his career in 10 categories.

BEST JAB – Muhammad Ali – It wasn’t that powerful but it kept you off balance. It’s hard to get away from a fast, snappy jab. Ali was the only guy I fought who had a good jab. 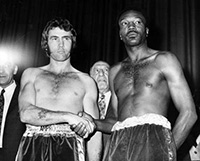 BEST DEFENSE – Chris Finnegan – I didn’t have any problems with them light heavyweights until I fought the guy from England, a southpaw. I jabbed him but had to go over his right hand, I couldn’t get the leverage to knock him out. I was building up points, winning the fight but I wanted the knockout, I didn’t knock him out till the 14th

round. He was the toughest guy because he was a southpaw. I think he was the best light heavyweight I fought.

BEST CHIN – Ali – I have to go with Ali because I caught him with a good right hand on the chin, I wobbled him, he could have been faking, but I don’t think he was. I know I shook him but he came back out of it quick. 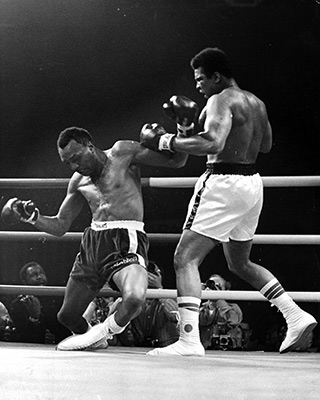 FASTEST HANDS – Ali – Again, I’m going to have to go with Ali, he was tremendous for a heavyweight. They were as fast as grease lightening. He’d clown and move, the guy was a tremendous fighter.

FASTEST FEET – Ali – He has it all, he was tremendous. You saw him do the Ali shuffle; he could move in his prime. He didn’t start slowing up ’till he got a little age on him. When I fought him he was in his prime. You look at him he’s right there in front of you, the next thing you know he’s on the right hand side of you, then the left, he just kept moving on you.

SMARTEST – Ali – I dominated them light heavyweights, none of them were smarter than me. I’ve got to go Ali – the guy could fight. He was a good fighter, good boxer, good mover; he wasn’t that much of a puncher.

STRONGEST – Joe Frazier – (Laughs) Smokin’ Joe Frazier. He was strong, he just kept coming to you. When he got in on you he’d kill that body. I tried to stay away from him, use my reach on him but that didn’t do any good. He kept moving and slipping his head, putting that pressure on.

BEST PUNCHER – Frazier – (Laughs) I’d say Joe Frazier. I hit Frazier in the first round with a right 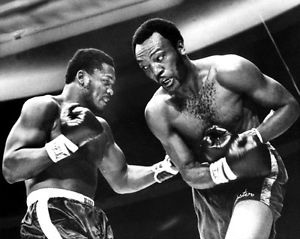 hand and buckled his knees and the bell rang, when we went back to the corner his trainer was mad and yelling at him ‘What the heck did I tell you? Didn’t I tell you you couldn’t give this tall skinny guy punching room, he’ll knock your f___ing brains out. Get on top of him.’ So I told my trainer ‘This guy’s crazy, he’s trying to box me. I’m going to knock him out this round.’ My trainer said, ‘Whatever you do, don’t pull back on this guy.’ We went out the second round and everything just changed, he started putting that pressure on me. I never did like pressure. He got me on the ropes, it was a habit of mine, I’d pull in and pull out real fast, I guess he timed it and I got hit by that left hook and I don’t remember nothing else after that! (Laughs). I was in the dressing room putting on my shoes, one of my trainers pulled them off and I’m putting them back on and he said ‘What are you doing?’ I said ‘I’m getting ready to fight.’ He said ‘Bobby, the fight’s over with.’ I said, ‘What do you mean?’ He said ‘He knocked you out.’ I said ‘On National TV?’ He said ‘Yeah.’ And I started crying, ‘Oh God, everybody saw me get knocked out.’ (Laughs)

BEST SKILLS – Ali – He’s fast for a big man, he’s never in one place for long, he’s always moving, he’s not that easy to hit.

BEST OVERALL – Ali – Muhammad Ali. He was the man. He was big, fast; he was smart and never did get hit easy.