Luis Ortiz: ‘I can fight whoever Golden Boy Promotions puts in front of me’ 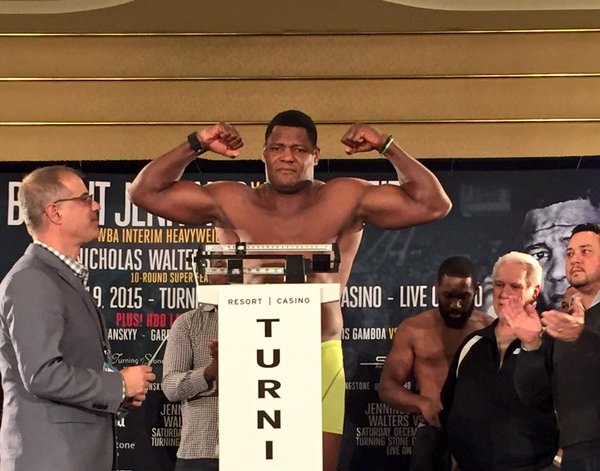 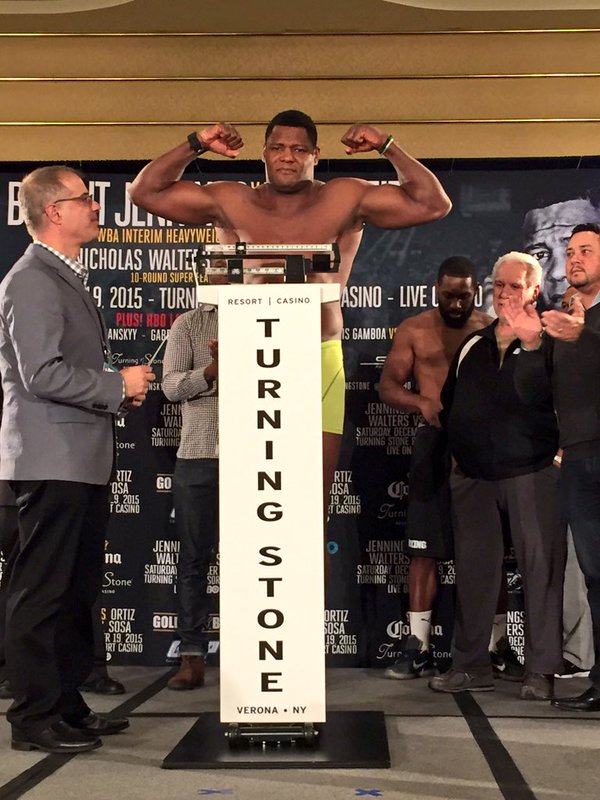 As an amateur in one of the most competitive boxing systems in the world, Luis Ortiz grew up accustomed to the idea of facing the best available opponents. But in his comparatively short career as a professional, the former Cuban amateur standout has had to work his way up against the usual list of trial horses and fringe contenders. In his last fight, against Matias Ariel Vidondo, he showed clear signs of anxiety when it came to taking the training wheels off and finally charging full speed ahead toward championship territory.

Ortiz will have this long-awaited chance to prove himself at the very top of the heavyweight division on Saturday, when he will face former world title contender Bryant “By-By” Jennings (19-1, 10 knockouts) at the Turning Stone Resort Casino in Verona, New York (HBO Boxing After Dark, 10:15 p.m. ET/PT) in a 12-rounder that will go a long way to prove whether Ortiz can thrive in the professional ranks.

Ortiz (23-0, 20 KOs) is convinced that this will be his breakout fight, one in which he’ll prove his true potential.

“Of course,” replied the hulking native of Camaguey and former member of the revered Cuban national team, when asked about our chances of seeing something new in his style in this particular outing. “I always show a little bit more and I have much more to give. Everything depends on what happens in the ring, on the resources I have to put in play to win the fight. Fighters have different styles but I have my own and I can adapt it to whatever style I am facing. That’s what I have trained for and that’s what I have prepared for, mentally.”

Our surprise, according to Ortiz, will only be surpassed by Jennings’ reaction.

“I don’t know how solid his chin is,” said Ortiz, when asked about his chances of scoring a stoppage against the usually durable Jennings, “but I am sure that he is going to face a completely different fighter than what he has faced in his entire career and his entire life. I can attack, counterattack, box, move, brawl, fight. I can do it all in the ring.”

Ortiz’s lack of chances in the big leagues cannot be attributed only to the customary slow build-up reserved for every lifelong amateur fighter trying to adapt to the professional style. He did his part by being careless enough to fail a drug test after defeating then-unbeaten contender Lateef Kayode in Sept. 2014. But now he is ready to move toward what would be a historic first heavyweight title for Cuba, and the possibility of being the one fighter to achieve that goal is motivation enough to keep him in the gym, focused on a dream that so many awesome heavyweights were forced to leave behind.

“I would love that very much, sure,” said Ortiz, about the chance of fulfilling his dream of lifting a heavyweight title belt above his head someday upon his return to Cuba, the homeland he left six years ago. “To get there with my team, have them meet my people and my province, I would love that. But I don’t know. I haven’t seen my mother in four years. But now I am scared that I would arrive there and I wouldn’t be able to leave because of the eight-year rule,” said the fighter, referring to a Cuban government-imposed eight-year ban to defectors who want to visit the beleaguered island-nation after moving overseas without permission.

Even so, Ortiz would love to see his compatriots share his accomplishments from a distance.

“I would like to see that they would pay attention to what I do in Cuba but you know how politics are,” said Ortiz, who, just like every other defecting athlete, is attacked in the Cuban press because of his “anti-revolutionary” stance.

“If you leave (Cuba), I don’t know the word for this, but they consider this a betrayal of some sort. But I don’t call it like that. I consider this to be the fulfillment of a dream.”

Ortiz’s dream got its start in his youth, when he trained with noted boxing coach Lazaro Noa in his native Camaguey, learning the ropes and building on the basic technique that one day would take him all the way to “La Finca,” the boxing facility just outside Havana where the national team trained under the strict regime of trainers such as Alcides Sagarra, Rolando Garbey, Sarbelio Fuentes and many others.

Soon enough, he would find himself following in the steps of some of the greatest heavyweights in boxing amateur history, Felix Savon, Roberto Balado and especially Teofilo Stevenson – with whom he shared the same birthday, for an extra measure of inspiration.

“Savon, Stevenson, Juan Hernandez Sierra, those were the fighters that I used to follow because of their fighting style but also because of their personality and their humility,” said Ortiz, who, in spite of revering those fighters for their multiple gold medals and their national hero status, idolized an American fighter even more.

“When you are young, you have idols and even though we didn’t have the chance to watch him in Cuba, my idol was Muhammad Ali,” said Ortiz. “I used to watch him with my dad in an old TV with a VCR.”

Because of Ali’s open stance against the Vietnam war and his views on racism in America, he was considered a hero in Cuba and, therefore, his interviews and his fights usually found their way into the otherwise anti-American airwaves in the island. And in a surprising turn of events, Ali’s influence as a fighter could be followed by his example as a freedom fighter, an example that, should Ortiz win a heavyweight title, could turn him into a spokesperson for the calls for democracy and freedom that his countrymen have embraced for so many years. But the soft-spoken Ortiz is skeptic about his chances of making a difference, even if he manages to attain the aura and the mystique of the heavyweight championship and the attention it carries.

“I don’t know what would happen then,” said Ortiz, when challenged to imagine himself landing in a still-Communist Cuba and galvanizing his people around him and his title to make a change. “First of all, I need to fulfill my goal of becoming world champion. And after that, I’ll see what happens.”

Whether that unlikely scenario materializes or not, Ortiz still acknowledges that the strict discipline of the Cuban boxing academy has been the driving force that has brought him this far in his career.

“I am thankful for all that I was taught as a child. I thank those who gave their time to teach me. Pro boxing and amateur boxing may be different but amateur boxing is the foundation of it all. The rest of what I have learned, I learned it from my trainer right now, who has taught me everything I know about professional boxing.”

And if there is one lesson from his amateur days that he claims to have heeded, that’s the need to face the best possible opponents out there, no excuses, no negotiations, no more Byron Polleys or Joseph Rabottes or other soft-touch, club-level opponents.

“I want to face the best,” said Ortiz, with an uncharacteristically emphatic tone in his voice. “I have one of them ahead of me on Saturday and he is a quality opponent. I need to leave this fight behind and then, Golden Boy (Promotions) knows that I want the best out there. I can fight whoever they put in front of me. Whatever it takes to prove I am the best in the division. Be it (Deontay) Wilder, or (Wladimir) Klitschko if he returns, or anybody ahead of me on my road to the title, that’s who I would want to face.”