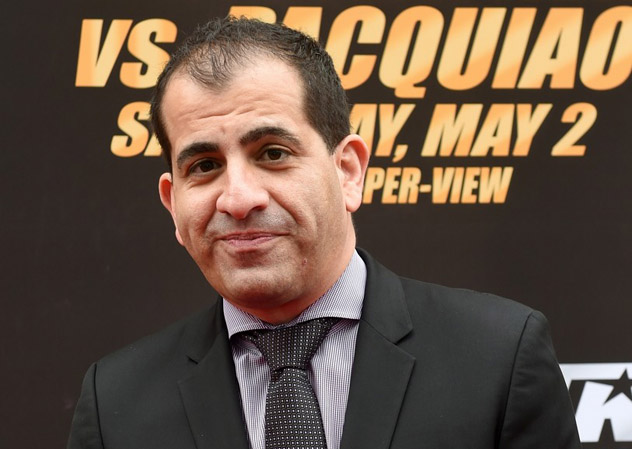 The man had a pretty good year, one could say, if you factor in that he was a major player in putting together the so-called “Fight of the Century,” the super-fight between “TBE” Floyd Mayweather Jr. and Manny Pacquiao.

Yes, you can quibble. You can dissect. You can accuse the players for not providing sensational – OK, even decent, frankly – value for the money, from a fan perspective…but it’s really only fair to give Showtime boxing boss Stephen Espinoza proper props for being a believer in putting together #MayweatherPacquiao.

I gave him that acclaim in person on Thursday, when we chatted some about the year in boxing that was, and what he foresees is to come, from a Showtime standpoint, in 2016. The head man at Showtime Sports said a few words from the dais at a presser to bang the drums for a Saturday night card, portions of which will be running on the Showtime channels. We then spoke of #MayPac, whether or not Floyd will come back and some things he wants to do in 2016.

“I’m happy with what we ended up with,” he said. “You start out the year with certain plans and then within a couple weeks…We started the year with a request from Floyd to try and make the Pacquiao fight again. It was not the first time he’d made the request but he wanted us to renew the effort.”

And cynics – *cough cough* maybe that sometimes includes me – thought it was another exercise in futility…but Espinoza knew better. He called an “X factor that we hadn’t had before,” Les Moonves, the CBS boss who was helpful to “beat up on all sides, including me and Floyd when necessary.”

That helped bring the Big Bang bout to fruition…even though the definition of “fruition” isn’t probably going to be agreed upon in the decades to come. “It was something that needed to happen and, once it happened,” Espinoza said, “then everyone turned around and pointed fingers at everyone.”

That event was the focal point of the year and drew oxygen from all over the place, to the point in which it’s hard to remember what else happened in this year in boxing, apart from that mega-clash.

“Now that fight has become a convenient scapegoat anytime a pay-per-view under-performs or ratings aren’t exactly what people thought,” Espinoza continued. Me, I think there may be something to that belief that it poisoned the well; the informal market research I do tells me that casuals who could have been lured into becoming perennials were so turned off by that #MayPacFiasco that they have sworn off buying another PPV for another 10 years or so, but point taken…

Anyway, let’s not mince words; “success” in this nation is so often, arguably too often, measured by monetary gain. That effin’ thing made money. Maybe three or four other Mayweather scraps of that six-fight deal didn’t so much but I think the fact that Espinoza’s contract was extended signifies that his higher-ups were not displeased that the Floyd mega-pact was under the Showtime umbrella. He didn’t want to go there but I’ve seen back-of-the-envelope figures which seem quite plausible to me…4.6 million buys, equaling up to $260 million in PPV money, and the networks took 7.5% of that as distribution fee…Again, I’m not privy to all the revenue streams and what constitutes a success in that sphere but I bring it back to the man supposedly had a couple years added on to his contract…

“It was a significant money-maker for everyone involved,” he said. “As much as some of us were vilified for how the fight turned out, it pales in comparison to how we would have been vilified it the fight hadn’t happened. Damned if you do; damned if you don’t. Bottom line, I expected more action…I think Floyd brought what he brings to the table. He is a slick defensive fighter and you don’t go to a hockey game with a defensive-oriented team and get mad if it’s 1-0.”

I could debate that; Mayweather Promotions CEO Leonard Ellerbe pushing the idea of a Floyd KO, that sort of thing. That does get considered and the more optimistic among us do tend to fall prey to lapping up hype, perhaps naively…so I could debate that…but I instead choose to offer unmitigated credit, again, for being a force in putting the puzzle together.

As for the future…Does that include a Mayweather comeback? I’d heard that fights 50 and 51 were being discussed before the Pacquiao fight was solidified and before the Berto farewell fight. True? “There never was a single conversation about extending Floyd’s deal,” Espinoza insisted. The boxer stuck to that six-and-out plan, he said, and no, he hasn’t reached out since he retired. They are in touch, Espinoza, Al Haymon and Leonard Ellerbe but, “It’s not on anyone’s radar, most importantly Floyd’s.”

Yes, Espinoza’s asked the question…You wanna come back?…and whether that holds in three, four, six, eight months, who knows? So, is Floyd “done done” done? “I think he’s done…He’s ‘done’ done…I wouldn’t put any of my money on Floyd coming back,” Espinoza said.

The SHO boss is looking forward to a reinvigorated heavyweight landscape, with Deontay Wilder, and the featherweight class, with Lee Selby, Gary Russell Jr., Jesus Cuellar, Leo Santa Cruz, Abner Mares in the mix, with a possible unification tourney being in the works. He sees 2016 as being a 2013-type year, with a bunch of best-fighting-the-best clashes unfolding.

We spoke of some vagueness being in the air, with some folks not knowing what’s a Premier Boxing Champions event, what’s a Showtime event and Espinoza nodded. Yes, he said, “I understand the confusion among fans and even some within the industry,” he said. The PBC effort, he thinks, will expand the overall fan base and he thinks it’s “something for the good of the sport.” Espinoza said he understands why network exclusive deals exist but he’d like that to not block a fight being made, be it in the 160 or 175-pound classes. Right now, he says there are no contracts that make fighters exclusive to Showtime and that can allow a “free agent” atmosphere, which will benefit fighters and fans. I cracked that now, the headline of this story was becoming: “Espinoza to fellow deal-makers – ‘Can’t we all just get along?'” He chuckled and said he is hopeful that some people he thinks are wrongly blocking fan-friendly bouts will put their own interests in a secondary spot, for the overall good of the sport. “If the sport doesn’t continue to grow – in popularity – then all of us are out of jobs,” Espinoza said, in conclusion.