Pinoy Pride 34 wins bring redemption for some, doubts for others 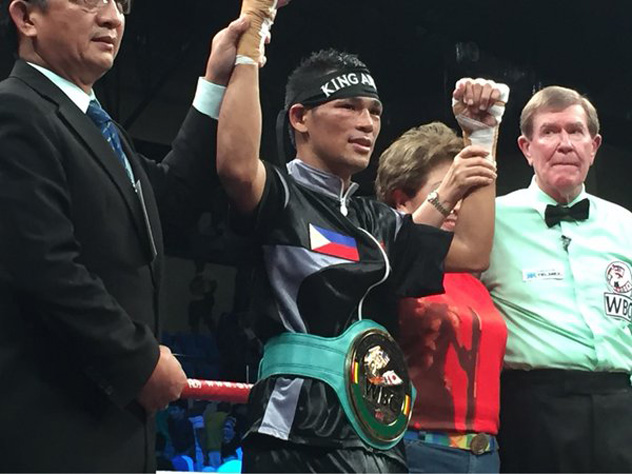 LAPU-LAPU CITY, Philippines – Redemption was the theme of the night at the Pinoy Pride 34 card on Saturday at the Hoops Dome.

For some, like junior bantamweight Arthur Villanueva and flyweight Milan Melindo, it was the first step after failed world-title bids. For others, like Rocky Fuentes and AJ Banal, it was a vital-signs check to see if they had life left in their careers.

All four earned victories over foreign opponents, but even their staunchest supporters would agree there was much to be desired before they returned to the championship level.

Villanueva – who concedes that a more aggressive approach to his IBF junior bantamweight title fight against McJoe Arroyo in July may have earned him the belt instead of a technical-decision loss – fought more assertively than he had in at least two years.

Villanueva, a former chess prodigy from Bacolod City, employed a King’s Gambit in the early rounds, attacking with his often underutilized jab to set up right crosses and left uppercuts.

As the fight had the WBC International 115-pound title at stake, WBC open scoring revealed that Villanueva, THE RING’s No. 9-rated junior bantamweight contender, was up 39-36 on two cards and even at 38-38 after four rounds. Villanueva pressed his advantage and he caught Mendez, 22, coming in with a flush right counter towards the end of Round 5.

Villanueva’s aggression had only earned him a slight margin on two cards (77-75) and had him behind (75-77) on the third after eight rounds. Mendez never showed signs of being hurt, and instead continued to answer back with stiff right hands of his own which marked up Villanueva’s face.

Villanueva said afterwards that Mendez’s punches convinced him to play it safe later in the fight, but that he didn’t feel that one of the scorecards should’ve been in his opponent’s favor.

“I need to improve myself first. Maybe 2-3 more fights so I will be ready for the next world championship,” Villanueva told RingTV.com.

Melindo (33-2, 12 KOs) rebounded from his technical-decision loss to IBF junior flyweight titleholder Javier Mendoza in May, but had a few nicks and scrapes to show for it. Melindo, 27, of Cagayan de Oro City snuck past Mexican Victor Olivo (9-1, 4 KOs) by a split decision, winning by tallies of 115-113 on two cards while the third had the 19-year-old late replacement winning by the same score.

Olivo hadn’t fought anyone the caliber of Melindo yet, but he didn’t come all the way from Hermosillo, Mexico, just for experience. Olivo proved dangerous in Rounds 2 and 3, rocking Melindo with right hands whenever they stood at range, or whenever Melindo closed the gap without jabbing.

Melindo found the distance he wanted in Round 4, backing up Olivo and landing fast counters, but his lack of punching power meant that Olivo would remain dangerous throughout.

Melindo landed his best punch of the fight in Round 8, a right hand that caught Olivo reaching for his own right. Olivo stumbled back but quickly regained his footing and looked for counterpunch opportunities.

Melindo seemed to outwork Olivo in Rounds 9 and 10, but an inspection of Olivo’s clean face and Melindo’s swollen eyes and bloodied nose would suggest Melindo absorbed the heavier shots.

“I fight not for the victory, but for the people who support boxing. This is a gift for them for advanced Christmas,” Melindo, who is rated No. 6 by THE RING at junior flyweight, said afterwards.

“[Melindo] made the fight closer than it was, I think he could’ve executed more,” said Aldeguer. “But Milan has his own mind. I think we need to sit down with him and see what’s in his head. Right now it’s either he wants to move forward or he wants to fight entertaining fights.

“He could’ve lost the fight.” 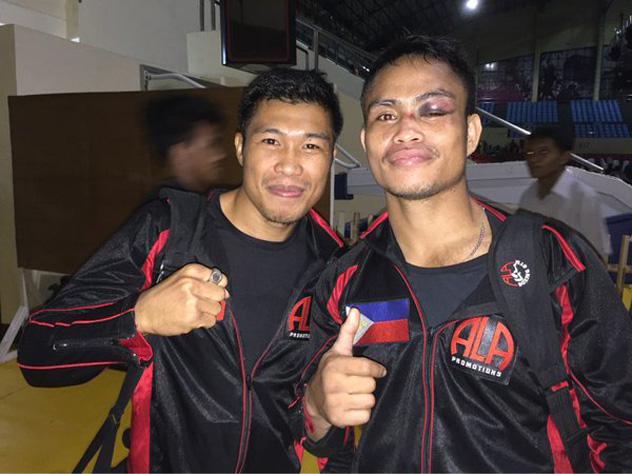 Early nights for Banal and Fuentes

Banal fought through a shut left eye to finish Tanzania’s Emilio Norfat (25-7, 19 KOs) at 1:41 of Round 3. Banal, whose two world title opportunities ended in disappointing upset knockout losses, dropped the 26-year-old Norfat with the first punch of the fight, a lead left cross that landed right on Norfat’s chin.

Norfat made it out of Round 1, and caught his biggest break of the night when an accidental headbutt made Banal virtually a one-eyed fighter. Banal came out for Round 3 with a sense of urgency and his efforts paid off when a right hook behind the ear sent Norfat to his hands and knees. Norfat rose up again but turned his back against a flurry from Banal to prompt the stoppage.

Banal has now won six straight since his ninth-round TKO loss to Pungluang Sor Sinyu in a fight for the vacant WBO bantamweight title in 2012. His other defeat came in 2008, when he was stopped in ten by Rafael Concepcion.

Earlier in the night, two-time flyweight title challenger Rocky Fuentes (36-8-2, 21 KOs) dropped Indonesian Afrizal Tamboresi (11-4, 6 KOs) with an overhand right that followed a left uppercut to win by TKO at 1:01 of Round 2.

Fuentes, 29, hadn’t fought in a year since losing a decision to Amnat Ruenroeng for the IBF flyweight title in January 2014, and being stopped in six rounds by Roman Gonzalez in a vie for the WBC flyweight title.

“They’re far from what they should be right now,” said Aldeguer. “It’s a long process for them. AJ has had some so-so performances. We really don’t know where he’s at right now.”

Filipino flyweight prospect KJ Cataraja earned a big boost of experience with a fourth-round TKO win over durable Indonesian Ellias Nggenggo. The 20-year-old Cataraja (2-0, 2 KOs) had to figure out his 26-year-old foe (10-9-3, 3 KOs) who, despite being knocked down on a body shot in Round 1, was able to elude his tormentor for much of the fight.

Nggenggo, who pulled off a major upset last year with a fourth-round TKO of former WBO strawweight titleholder Merlito Sabillo, was beaten around the ring before a serious cut on his left eye ended the fight at the 2:43 mark.

Cataraja will be back in action on ALA’s next show in February, which will highlight the stable’s younger fighters like Albert Pagara and Mark Magsayo.