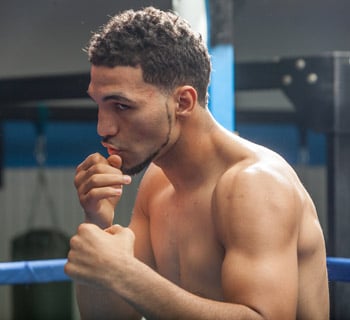 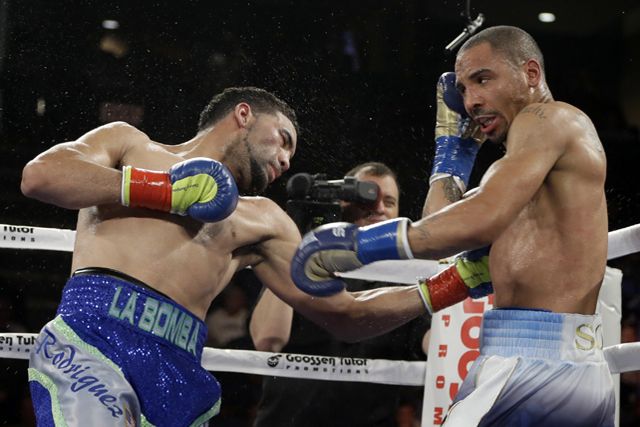 Edwin Rodriguez (L) in one of the few moments of success he had against Andre Ward in 2013. Photo by Red Saxon/Associated Press

Few things in boxing are riskier than a fighter overstaying his welcome at a particular weight class. The inherent health dangers of fighting a 12-round bout without the necessary energy to both withstand and inflict punishment is oftentimes underestimated by fighters who believe that the prize is worth the stretch.

Edwin Rodriguez is a perfect example. The Dominican-born fighter was coming off a terrific unbeaten run when he decided to push his luck on the scales one more time to have a shot at Andre Ward’s super middleweight title and ended up suffering a career-shattering loss in 2013. But after a 3-0 run in two years as a full-fledged light heavyweight, Rodriguez (27-1, 18 knockouts) said he’s ready to claim his place among the elite in his new division, and he will take his first step this Friday when he faces Michael Seals (19-0, 14 KOs) at Beau Rivage Resort and Casino in Biloxi, Mississippi, in a 10-round main event on Spike TV.

“On that night I can’t make any excuses,” said Rodriguez in a telephone interview about his loss and quite likely his worst performance ever as a prizefighter. “Andre Ward was the better fighter. He’s an intelligent fighter. And even though I wasn’t at my very best, I got into that problem myself. And it’s on me to crawl out of that hole and this is one of those fights in which I can achieve that. If I beat an unbeaten fighter like Michael Seals I will have the opportunity to fight (Adonis) Stevenson for the world title.”

Rodriguez blames his lackluster performance on the additional effort he needed to make weight for that particular bout.

“Yeah, after four rounds my energy just wasn’t there. But like I said, it was all on me. He was a great fighter and did what he had to do. I didn’t. All at once. Now I have to do my job and win to get new opportunities.”

Rodriguez’s loss was particularly painful because he was coming off his peak as a fighter in back-to-back victories in Monaco as part of the “Million Dollar Tournament” in mid-2013.

“I felt great,” said Rodriguez about outcome of that tournament. “First I defeated (Ezequiel) Maderna in the first stage of that tournament, and he was an Olympic fighter, and in the final fight I knocked out (Denis) Grachev in the first round. He had just gone 12 rounds with Lucian Bute in a close fight, and I felt on top of the world back then.”

In spite of having only one loss – against a fighter widely considered as a Top 5 pound-for-pound entrant – Rodriguez, who fights out of Worcester, Massachusetts, is not usually mentioned in the same breath as the top dogs in his weight class, an elite group featuring names such as Sergey Kovalev, Jean Pascal, Adonis Stevenson and many more. But Rodriguez feels that’s about to change.

“I am not in the conversation because none of them want to fight me,” said Rodriguez. “What they say is that, ‘Oh, he lost to Ward, and now there is not enough reward for me in fighting him, there’s too much risk.’ And it is becoming difficult for me to get the big fights, to get everyone to see me as a contender with ambition and potential to become a world champion. I believe I am at the elite level already. All I need is for those fighters to face me. Guys like Pascal and all of them, they won’t fight me. And all I want is an opportunity to show them that I am up there. It is a strong division and with very good fighters, and my style fits right in there to make great fights.”

But before he reaches that stage, Rodriguez needs to succeed where 19 other fighters have failed.

“He’s undefeated in 19 fights, but he hasn’t fought the kind of fighters I’ve faced,” said Rodriguez about his next opponent. “He is unbeaten and has that mentality of not knowing how to lose, and I will have to teach him that. I will have to show him that I am not one of those other 19 guys he’s fought before. From the very beginning, I have to show him that I am better and I have to keep him out of his comfort zone.”

With his weight issues behind him, Rodriguez aims to focus fully on his immediate goal to earn a place at the negotiation table in a division suddenly filled with talented fighters.

“We’re going to fight at 175, and that doesn’t make any difference,” said Rodriguez when asked about Seals and the many fights he had above the light heavyweight limit, some of them as high as 212 pounds. “I am mentally and physically ready to give him a good fight and set up bigger and better fights in the future. I have to let him know I am the better fighter, I will not let him get confident. And I am not going to look for the knockout, but rather I will create the opportunity for it to happen. I will work calmly behind my jab and wait for it.”

Having learned his lesson well, Rodriguez believes he will be staying at 175 for as long as he can.

“Only your body knows how long you’ll be able to make the weight. I fought at 168 since I was 17 years old, and the body told me that I couldn’t do it anymore. Now I am trying to become strong at this weight in order to fight for a world title. I had a setback against Ward at 168, but then I went up to 175, and God willing after this win over Michael Seals I will fight Adonis Stevenson for a world title.”