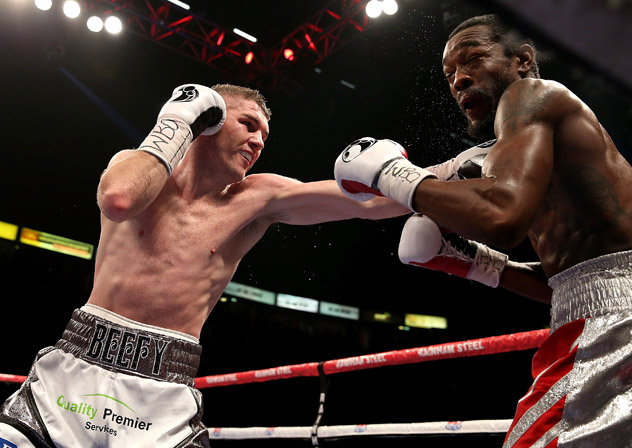 Smith, rated No. 9 by THE RING at 154 pounds, scored a stunning seventh-round stoppage over American John Thompson to capture the vacant title in October and is looking forward to closing out the year with another victory.

“I can’t wait to make the opening defense of my world title,” said the undefeated Smith (21-0-1, 11 knockouts) who hails from Liverpool, England.

“Kelly is a tough and unbeaten young challenger which is fantastic because it gives me the motivation to give him a real hiding. I’m entering the prime of my career and there is much more to come from me. I’m not going to let an upstart like Kelly anywhere near my title.

Kelly, from Manchester, England, is 16-0 (7 KOs) but has never shared the ring with a fighter of Smith’s experience. The 23-year-old will start as a massive underdog but appears unfazed by the task ahead.

He said, “Smith’s reign is going to be very brief. He’d better treasure the next five weeks as world champion because it’s coming to an end in December.

“I’m not going to be someone who dwells on a missed opportunity, so I’m going out there to smash up Liam Smith and take his world title. I’ll have too much of everything for Smith in every department.”

Smith and his team negotiated briefly with former three-weight world titleholder “Sugar” Shane Mosley but a proposed bout fell through. His fight against Kelly will be the chief support to Andy Lee’s WBO middleweight title defense against Billy Joe Saunders.

*Tickets are subject to a booking fee