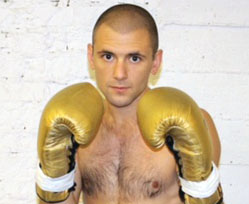 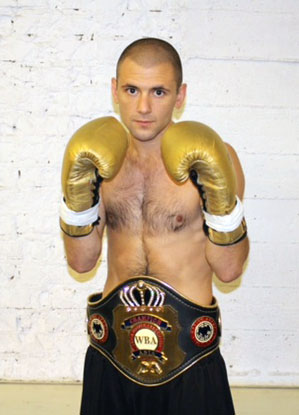 “It was definitely my last fight against Jason Canoy in front of my hometown fans,” Potapov said. “It was my first 12-round bout and Canoy was ranked No. 10 by the IBF. He was by far the toughest opponent I had and I felt very comfortable in the ring with him.”

Potapov said that although there was plenty of video out there of Canoy he purposefully did not watch any of it.

“It doesn’t matter what he did against other guys. That wasn’t me he was fighting on YouTube. It’s my trainer’s job to watch his fights and help me develop a game plan to beat my opponent. My job is to fight whoever they put in front of me.”

Although Potapov only has 6 knockouts he admits he goes into every bout expecting to stop his opponent. Potapov recalls his victory over Nasibu Ramadhani in 2013, where he felt he may have been too aggressive in looking for the knockout and it made the bout go longer than expected.

“I got the win but to tell you the truth it wasn’t my night. He was a southpaw and I couldn’t do the things I wanted to do, Potapov said. “I should have knocked him out and I stopped guys who were better than him but like I said my game plan didn’t work for me that night.”

Potapov believes that learning experience has helped him make adjustments in the ring when his initial strategy fails him.

“I am always thinking in the ring. I should be able to beat my opponent by outsmarting him and out-boxing him. The mind is as powerful as the fist.”

Potapov will make his U.S. debut tonight in Brooklyn against Pedro Melo (13-10-2, 6 KOs) in a 10-round bout. Potapov has never fought outside of Russia and is very anxious to make new fans.

“I really feel I’m at my best for this fight,” said Potapov. “My coach said I’m much quicker and stronger today than ever before.”

It was at Barclays Center last June during the Miguel Cotto-Daniel Geale bout that Potapov’s manager/promoter, Pavel Popov, approached New York-based promoter Dmitriy Salita about bringing Potapov to New York to make him a title contender.

“I heard of Potapov from the people I trust in Moscow and they all confirmed that he is a special fighter,” said Salita. “I am impressed with his conditioning and his poise. It was a no-brainer to sign him and bring him to New York. The crowd will really be in for a treat.”

While Potapov will miss fighting in front of his friends and family he believes that coming to the United States is critical to making a bigger name for himself.

“This will be my first time where my daughter won’t be there to watch me fight,” said Potapov. “She loves jumping into the ring to hug and congratulate me. It will be hard without her but I have a job to do.”

Why he’s a prospect:

Potapov’s Russian-based promoter and Salita both feel Potapov is on a fast track because of his extensive amateur background.

“Salita and I have a plan for Nikolai,” said Popov. “2-3 fights in the United States and we think we will be ready for a world title shot. We want to bring him to a network like HBO and Showtime.”

Potapov continues to build a buzz around his name by taking on opponents who are ranked higher than him and dismantling them in an easy fashion. Currently, Potapov is ranked No. 14 by the WBO and No. 13 by the WBC. Boxrec.com ranks Potapov as the No. 8 bantamweight in the world.

Potapov’s team believes after his next bout he will be ready to get in the ring with the likes of Lee Haskins, who is ranked No. 7 by The RING, and Randy Caballero, who is presently ranked No. 6.

Why he’s a suspect:

Potapov is virtually unknown in the U.S. and will be building a fan base from scratch. He admits he is still a work in progress.

“I am constantly learning and I have to be at my very best if I am going to compete with the biggest names in the sport,” said Potapov.

His manager believes Potapov must look great in every fight from this point.

“He is not known here and we don’t know many people,” said Popov. “This is a foreign territory. We don’t know how these judges work. We need to knock people out or look very good to make sure we win. It’s hard to get the big fights staying in Russia so that’s why we are here and why we went with Salita Promotions.”

Potapov has been a pro for almost six years but has had stretches of inactivity due to complications with his first promoters.

“I definitely wish I was more active in the beginning but all that is behind me now,” said Potapov. “I have a great team behind me and I am looking forward to more great things to come.”

Potapov started boxing at age 10 when his father wanted him and his three brothers to learn the sport. As fate would have it, one of their neighbors was a famous Olympic coach who took a liking to the younger Potapov and prepared him for his first amateur bout at 12 years old.

Potapov’s daughter, Alona, was born when he was just 17 years old and 2 months later he knew he needed to become a pro to support his family. Today Potapov supplements his income by working as a fitness trainer for kids.

“The money will be there, but I want the titles,” said Potapov. “This is what’s important in boxing. It’s not the money.”

It’s this way of thinking that reminds his manager of a young Sergey Kovalev.

“I know Sergey well and he is the same way,” said Popov. “Sergey sometimes got paid $1,000 and sometimes was not paid at all but he would always say, ‘I want to be a champion.’ Now look at him. Nikolay is a focused young man and we will help him reach his dreams.”