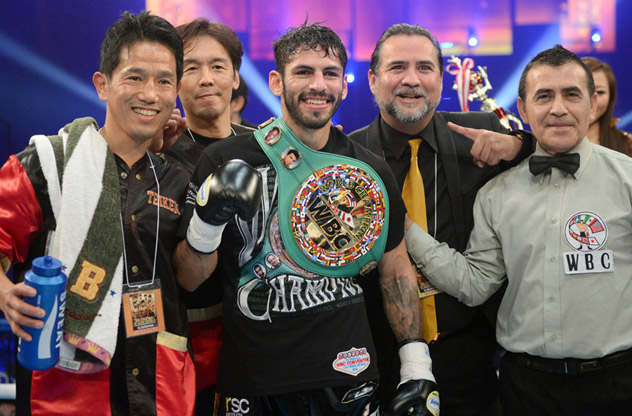 It was March 31, 2012 when Jorge Linares was stopped by Sergio Thompson in the second round inside a small dance hall in Cancun, Mexico.

Most boxing insiders then believed the fighter known as Nino de Oro (which means Golden Boy in Spanish) was done in the sport. An afterthought. A “never will be.”

Funny how perceptions change in just a few years in the boxing world.

In a period of a little more than two and a half years, Linares captured a world title belt and is now considered one of the best lightweights. The Venezuelan is rated No. 1 by THE RING.

Linares will defend his WBC lightweight title against Ivan Cano tonight at El Poliedro in Caracas, Venezuela. The bout will air on espn3.com, beginning at 9 p.m. ET/ 6 p.m. PT.

Linares (39-3, 26 KOs) has held world titles in three weight divisions. He has spent the last two and a half years proving his career is right on track, despite suffering three heartbreak defeat, all by knockout.

Five months before the Thompson fight, Linares was beating Antonio DeMarco decisively before losing by technical knockout (due to bad facial cuts and lacerations) in the 11th round.

Linares has proven that he can get up from a knockdown, as was the case in his last bout on May 30 against respected British contender Kevin Mitchell. Linares rallied to stop Mitchell in the 10th round in one of the best fights of 2015 so far.

Linares has won his last eight bouts and could make it nine with a win over Cano (23-6-2, 15 KOs), who is unbeaten in his last bouts, on tonight. Who could he face next?

He could face the winner of the Terry Flanagan-Diego Magdaleno fight, which also takes place on Saturday. Flanagan holds the WBO lightweight title.

Linares could also unify the WBC and WBA title, which Darleys Perez will defend against Anthony Crolla later this fall.

“I am ready to continue dominating the lightweight division and ready to bring a big night of boxing to Venezuela on Oct. 10,” said Linares in a press release. “This is a great homecoming for me. After traveling for most of my career (he has a majority of his fights in Japan), I am proud to bring the title home to Venezuela and be able to defend it at home. On Oct. 10, I will continue to show why I am a champion at 135 pounds.”

“He (Linares) is one of, if not the best, fighters to come out of Venezuela, so the crowd will be electric,” said Oscar De La Hoya, the CEO of Golden Boy Promotions and Linares’ promoter. “Linares is one of boxing’s most exciting fighters to watch, so I’m pleased fans around the world will have an opportunity to watch in action this Saturday.”