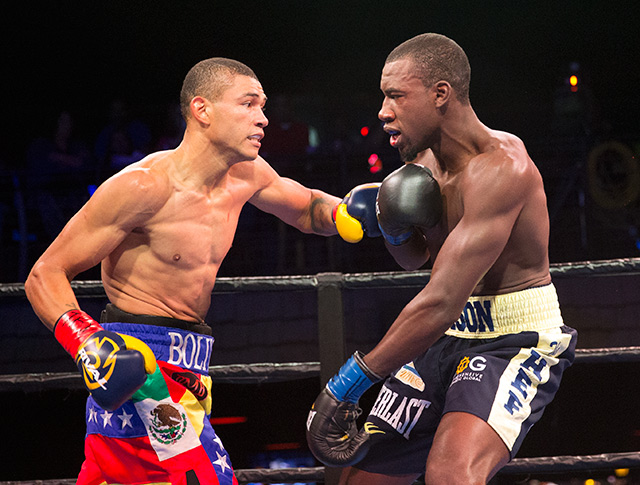 The following press release was issued Tuesday night on behalf of the Premier Boxing Champions organization and Leija Battah Promotions:

SAN ANTONIO (October 6, 2015) – The main event of Premier Boxing Champions on FS1 and FOX Deportes from Cowboys Dancehall in San Antonio, TX saw Jose Uzcategui (24-1, 20 KOs) stop Julius Jackson (19-1, 15 KOs) 45 seconds into the second round. Uzcategui got off to a blistering start, dropping Jackson three times in the first round. Jackson was never able to regain his footing and the fight was stopped before the midway point in the second round.
The opening televised bout featured Argenis Mendez (23-3-1, 12 KOs) scoring a unanimous decision (99-90, 97-92, 95-94) over Miguel Vazquez (35-5, 13 KOs) in a hard fought battle.
The next edition of Toe-To-Toe Tuesdays will take place on October 13 as Gerald Washington (16-0, 11 KOs) takes on Amir Mansour (22-1, 16 KOs) from Little Creek Casino Resort in Shelton, WA.
Here is what tonight’s fighters said about their performances:
JULIUS JACKSON
“It was a pretty fast start and that was about it. I just got hit and I don’t remember much after that.
“We wanted to control the fight with my jab, but he countered well and hurt me. I never recovered after that.
“I never thought about holding. I was busy working.
“I was trying to pop something in between and got caught.”
JOSE UZCATEGUI
“Our plan was to go round by round, but sometimes opportunities arise. As soon as I saw I hurt him I took advantage. Speed was the key tonight.
“We didn’t underestimate him at all, but once we saw our advantage after the start I jumped on him.
“I knew that he was a great athlete, and a good fighter, so I came out here and did what I had to do. I know what it’s like to have a stumble in the course of my career though, so I hope he doesn’t get discouraged by this. But tonight was mine.
“This is everything we’ve been working towards for three months. I want to thank my entire team because they constantly drilled into me that when (Jackson) throws the jab I should immediately shoot the right hand over the top. We knew that the best part of his game was his jab, but we were focused all training camp to throw the right hand and tonight we were able to do so.”
MIGUEL VAZQUEZ
“I wanted to pressure him a little more. Unfortunately things didn’t turn out the way we planned because we didn’t get the win.
“I feel good, but tonight (Mendez) was a little more technical than I was.
“It’s an honor to fight on this card. I want to thank Al Haymon. This was huge opportunity for me and my career.”
ARGENIS MENDEZ
“My plan was to be aggressive, use my jab and break him down every round. That’s what I did.
“I was able to land the bigger, cleaner shots throughout the fight.
“He was holding me a lot and using his head. I was trying to do what I could to deal with it, but they were letting him fight.
“I want a world title fight next. From this point on people are going to get used to seeing 100% out of me.”
# # #
Jackson vs. Uzcategui was promoted by Leija Battah Promotions.