Lucas Matthysse keeps his focus on the prize, history – and MMA? 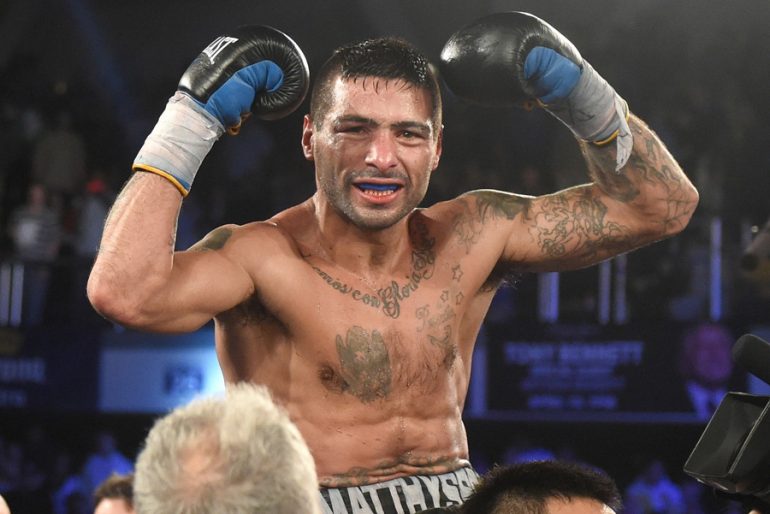 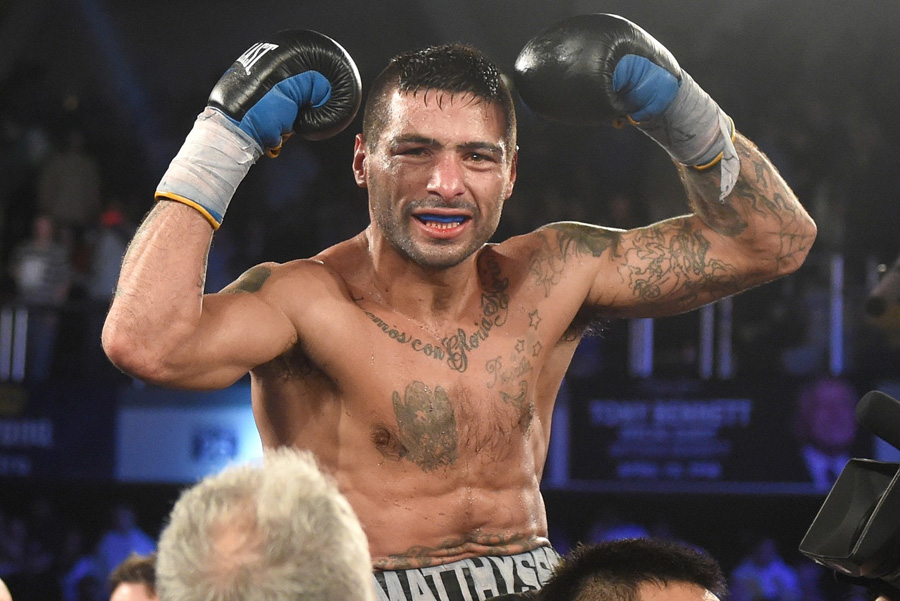 As fight night approaches and Argentina’s Lucas Matthysse gets ready to face Ukraine’s Viktor Postol on Saturday, Oct. 3 at the StubHub Center in Carson, Calif. with the vacant WBC junior welterweight title on the line, Lucas’ long-awaited chance to finally grab a world title belt seems within reach once and for all. It is an achievement that could transform him into the crown jewel of a boxing family that stretches in every direction, from uncles and parents (both of them, for good measure) to siblings and nephews.

The pride of the Fighting Matthysses – part one

The pride of the Fighting Matthysses – part two

And the added opportunity to make history by becoming one-half of the first pair of a brother-sister duo to hold world titles simultaneously (unlike Lou and Melissa del Valle, a pair of siblings from the Bronx, who held titles back in the ’90s) appears as an added incentive.

“I am proud of following him in his steps in this special moment,” said Lucas’ sister Soledad “The Itaka” Matthysse (14-7-1, 1 knockout), currently training to defend her WBA and WBC featherweight belts sometime before the end of the year. “The entire family is proud of supporting him as well as he is proud of supporting me.”

Soledad hopes their dual achievement will have a chance to be celebrated in style.

“I don’t know whether they are waiting for Lucas to win this fight to give us the titles. They keep moving the delivery of my title belt one week to the next,” said Soledad, regarding the WBC’s unexplained delays in handing her the green belt she took from Jelena Mrdjenovich in Buenos Aires in early August, in a unification bout. “Now they say it’s going to be on the 13th and Mario [Narvaez, husband, and brother to two-division titlist Omar Narvaez] believes they want to do it for both of us together. And that would be very exciting and emotional for us.”

Her support is not lost to Lucas, who is always available for her to comment on the videos they share through social media.

“We’re always supporting each other by phone. We created a group on WhatsApp [a mobile messaging application] and that binds us together much more, in spite of the distance,” said Soledad, who lives in the southern city of Trelew, some 800 miles away from Lucas’ current hometown of Junin.

And even after this accomplishment is in the history books, the “Brotherhood of The Ring” that their family has fostered through generations will continue in support of their amateur nephew Ezequiel (son of Walter, a former contender), who currently trains in California under Robert Garcia, planting the seeds of future accomplishments for one of boxing’s most decorated families in Argentina. 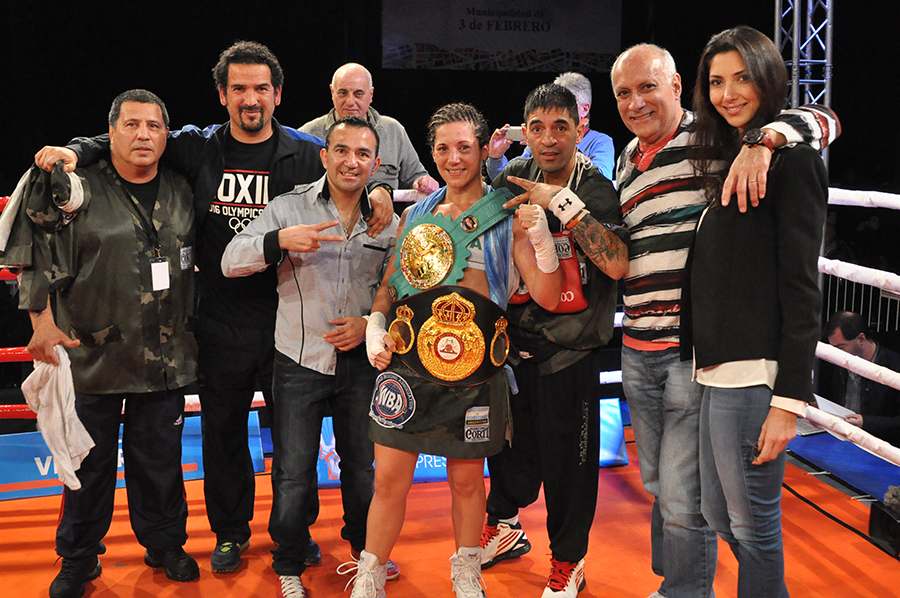 “[Lucas] had a great amateur career. He had a great run, then he got into the national team, went to the PanAm games, and now you can see what he harvested from that,” said Soledad. “We know how he feels because we’ve all been through that. It happened to me when I get ready for my big fights. And we know he will put his life on the line for this one.” 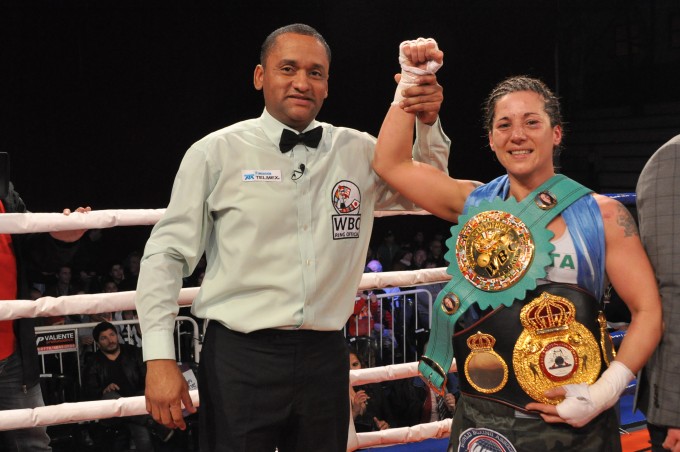 Lucas: Life as an MMA athlete after retirement is possible

Lucas Matthysse’s grueling training camp included a visit from Golden Boy Promotions President Oscar De La Hoya to his remote, small town deep in the Argentine pampas. Now that he is already in Los Angeles, Matthysse is returning the favor by helping his promoter do the media rounds in anticipation of his title fight against Postol.

One of those media engagements became surprisingly interesting.

“Sure, I’d love it. I can’t wait. As soon as I retire, I’ll give it a shot,” said Lucas, to the bemusement of his interviewer from Spanish-language channel Univision, his promoter and his team, when asked about his thoughts on the world of mixed martial arts.

Matthysse had stopped to gaze at one of the MMA cages at The Rock Gym, where he puts the finishing touches on his training, when his manager’s PR representative Marcelo Gonzalez asked him whether he’d like to try his hand in the somewhat controversial combat discipline.

“You’re not serious; are you?,” replied Gonzalez to Matthysse’s surprising statement, only to learn that the fighter was dead serious about his idea.
“I am serious. I like it a lot. I am going to make one fight and, if I like it and I do well, maybe I’ll continue doing it for a while,” said Matthysse.

Gonzalez attempted to call Matthysse’s bluff by threatening to tweet his statement and the fighter saw it and doubled down on it without hesitation. “Go ahead and do it. I’m not joking,” said Matthysse.

Matthysse: “My hand is fine”

After his “Fight of the Year”-worthy performance against Ruslan Provodnikov back in April, Matthysse found himself on the winning end of a surprisingly close decision, which he later blamed on a minor injury of his right hand during the fight. This caused him to stop throwing his right midway through the bout, thus conceding his foe a small but significant advantage.

“My hand is fine; I just hurt it hitting [Provodnikov] so much,” he joked. “I threw 1034 punches, which is a lot. It was a tough fight, hitting a guy with all my strength and not having him feel the effect is truly incredible. I was never hurt other than in my hand.”

Falcao and Rios leave their rivalry behind to join Equipo Matthysse

After producing one of the most scandalous debuts in boxing history, Yamaguchi Falcao finally got his wish and defeated the man who ruined his first professional bout (resulting in a no-contest) when he defeated him 10 months later in a rematch. And still, the bad blood among them persisted.

Now, 17 months later, they met again in the same ring but, this time, it was a completely different affair.

“As soon as we saw each other here in training camp, we hugged each other and started living all together like a big family,” said Martin Rios about his reunion with Falcao as part of Lucas Matthysse’s star-studded lineup of sparring partners in Junin.

After a stellar amateur career, Falcao had chosen a tough cookie to start his career against in the paid ranks. Rios was 10-0-2 (4 knockouts) when he faced Brazil’s Falcao in the latter’s professional debut after an illustrious amateur run that saw him win a bronze medal in the London 2012 Olympics as a light heavyweight.

But the fight unraveled quite quickly as the heated words they exchanged during the build-up of the fight permeated into the ring and, soon enough, they kept exchanging punches after the bell in the third round of a scheduled four-rounder, only to be disqualified immediately. Both of them. At the same time.

The fight was declared a no-contest once the officials in Brazil found out that you cannot score a defeat for both fighters in the same fight. Falcao scored a unanimous decision in the rematch in Nov. of 2014 to settle the dispute.

Now, Falcao has settled in Junin to be a part of Matthysse’s stable of sparring partners and he even plans on continuing his career in Argentina after experiencing the local talent both on and off the ring.

“I like to work out here in Argentina; they’re doing things right. I am thinking about doing my training camps here from now on for my fights,” said Falcao, now 8-0 (2 knockouts), pondering both the coaching staff and the sparring partners available in Junin’s Arano Boxing Gym. And he followed up on his promise with a victory over Alberto Sanchez (11-9-1, 1 knockout) last Saturday, Sept. 19 in Mina Clavero, in the province of Cordoba, just to stay busy while he helps Matthysse and waits for another big fight, which could easily happen in Argentina against an opponent he knows quite well.

“The first one was a typical Argentina-Brazil affair,” said Rios, when asked about the possibility of continuing with their rivalry, referring to the historical enmity between the two countries. “And the bad blood carried on to the second one but a third fight would be great. Why not?” 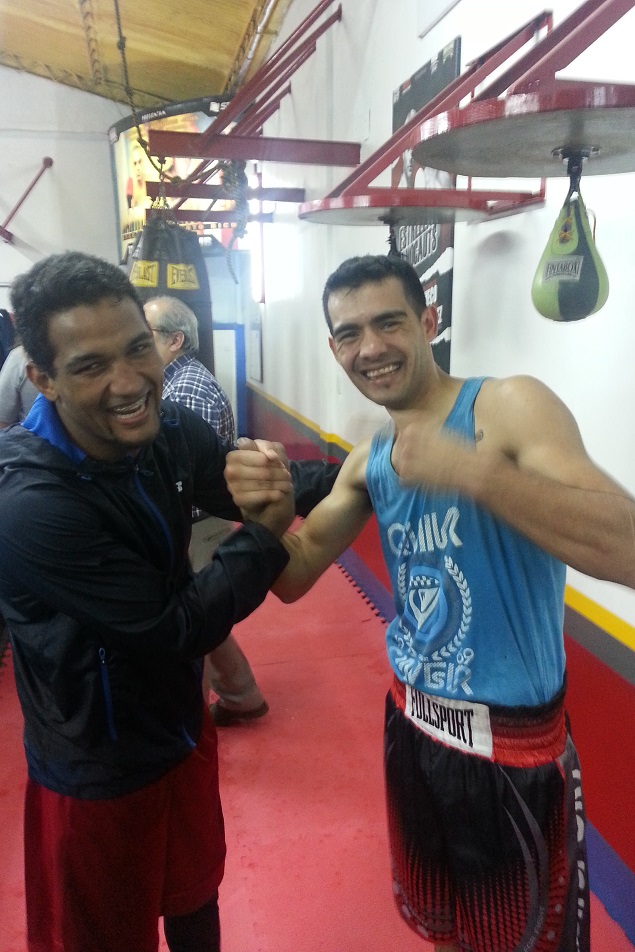 Falcao (left) and Rios can’t even pretend to be enemies now, even when asked to pose for a fake face-off photo. Photo credit: Diego Morilla