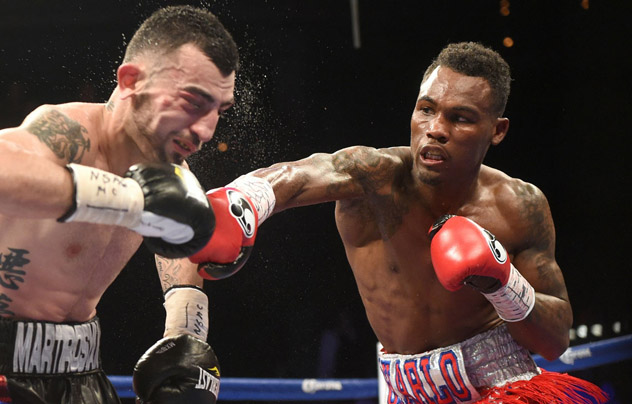 Undefeated junior middleweight Jermell Charlo will face Joachim Alcine on Oct. 31 in the main event of a PBC on NBCSN card in Houston, it was announced in a press release on Friday.

Charlo, 26, last seen in the ring with a close unanimous-decision win over longtime contender Vanes Martirosyan in March, will be fighting in front of his hometown fans for the first time in three and a half years.

“This is a good fight against a former world champion (Note: Martirosyan’s only fight for a legitimate world title was a split-decision loss to Demetrius Andrade for the WBO strap in 2013),” said Charlo (26-0, 11 knockouts) in the release. “He’s experienced and he’s been in the ring with multiple world champions. I’m not taking anything away from him, but Houston is my town. I’ve been anticipating another fight here. I’m ready to go and I’m going to put on a great show.”

Alcine (35-7-2, 21 KOs) has the distinction of being one of only two men to defeat David Lemieux, whose 9-fight win streak since then has taken him to Gennady Golovkin’s doorstep for a fight on Oct. 17. The victory occurred in 2011 via majority decision, but Alcine has gone 2-5-1 since. The 15-plus-year veteran, who was born in Haiti but resides in Quebec, most recently fought to a split draw with Delvin Rodriguez on “Friday Night Fights.”

“I am so excited for this opportunity to compete against a young, strong fighter like Jermell Charlo,” said Alcine. “I don’t think he’s faced a fighter with my level of experience in big fights. I am not going to make it easy for him. I am going to challenge Charlo like he never has been before.”

Charlo is the twin brother of newly crowned IBF titleholder Jermall Charlo. They are currently ranked Nos. 4 and 5 at 154 pounds by THE RING.