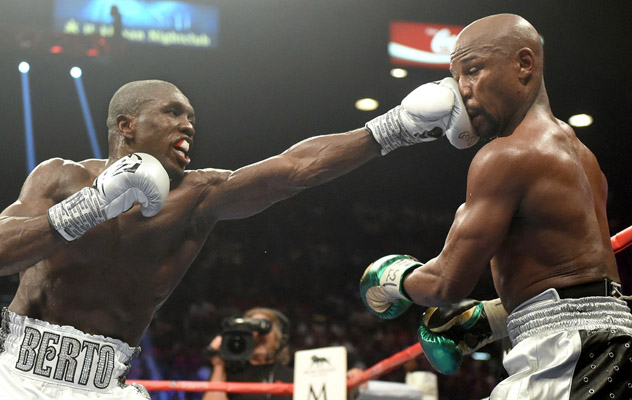 After I made sure that the quotes I saw were not coming from a boxing version of The Onion, I picked my jaw up off the floor and went to the keyboard.

Did Virgil Hunter really say that?

Does he really think that?

Does the man who thought Andre Berto would have more luck than he did against possible “TBE” Floyd Mayweather Jr. really say that he thinks writers who cover boxing should function as promoters of the Sweet Science?

That is a stunning admission, made more interesting and curious and head-scratching with the fact that the trainer, who also helms Andre Ward, is employed to help analyze Premier Boxing Champions fights which run on CBS.

Hunter spoke to FightHype.com after his guy won a round or two against Mayweather, so maybe he was feeling perturbed and defensive. But after starting off fine, talking about how he has no beef with people choosing not to watch because the pay-per-view fee can be onerous to many folks who aren’t rolling in it, he switched gears, from fans to media, and basically chided media for critiquing.

Reporters should “be a fan, be an ambassador, support the sport.”

OK, he actually got off on half a good foot because he actually said, “If you’re a fan and you’re critical, like I said before, you’re not a real boxing fan.”

That is a ludicrous statement and indefensible. Who is he to define a REAL boxing fan anyway?

Sorry – not actually sorry – but this is remarkably ignorant. This should go without saying but I guess it needs to be said, for a party of one, anyway…The job of the writer, the reporter, is to report. To be the eyes and ears for someone not present, who seeks to know what went on. Report and analyze because there will be some choosing of what to write and what to leave out, unless one is OK with writing a 10,000-word story on every fight he or she sees and report on.

Virgil, the job of me, of Dan Rafael, of the fellas at FightHype, all of us, is NOT to promote the fight. Now, I will concede, lines have blurred. Straight reporting is out and analysis and opinion mixed in with reporting is now more so the order of the day. And FightHype is THE media outlet for Mayweather because he enjoys their treatment of him…and Oscar De La Hoya owns THE RING…So I can understand if Hunter maybe doesn’t care for that shift and prefers a straight-up AP style, “Just the facts, ma’am” manner of reporting.

But if that is so, then he cannot have it both ways…because FightHype in itself is part of the new media. You’ll note how the questioner in the video posed his query to Hunter, how he led him, how he wanted him, it sure seemed like, to fire at critics. The questioner wanted him to criticize, not the sport, but those who cover it. So it seems like Hunter is OK with some folks criticizing and taking aim at certain elements of the sport and personas involved is OK…but other elements and persons are not OK to critique.

Hunter continues, says that, in the NFL realm, the media that covers them doesn’t critique them so harshly and they’d be out of a job if they criticized the sport. Boxing media should be like NFL media and treat the sport as sacred, he says.

This sport of ours is wondrous and majestic and also dirty and depraved. The promoter’s job is to focus on the wondrous and majestic. If they spotlit the dirty and depraved side, they’d be slimming their own wallets. Being in business to make the most money possible, most of them, they won’t do that. So, who is there to spotlight that other side? An individual fan can but he has a limited platform, as a body of one, with no megaphone. The media, though, has a larger platform and can serve as an equalizer to rein in excesses and shine a light on bad actors and bad acting and cheating and poor matchmaking which serves to diminish the sport’s popularity and enrich a small few while degrading the entity as a whole. The media is there, impartially, ideally, in my opinion, to give a voice to the voiceless. NOT to amplify the voice of the most powerful, though, as media monopolies have grown in the last 30 years, we see more and more of that.

Hunter says that who will win or lose is basically known going in to many NFL contests and you don’t see NFL media whining and complaining and critiquing…but that gets into an apples-and-oranges comparison, because – hello – the league makes the schedule and all fans know many games feature the Haves against the Have Nots. In our sport, too often, fights are put together pitting Haves against Have Nots – who are presented as Haves. This should go without saying but, seeing as how Hunter went public with his stance, I guess it needs clarifying. Boxing is an an island unto itself, unlike any other. Because it is a freelance sport, and there is no league office overseeing with quality control and such, the media in our sport serves a different function than the media in any other sport. We are here, to a greater degree than in other pro sports, to help with the checks and balances department. But Hunter, it seems, wants us to all be on the same page, be promoters and turn a blind eye to things he deems negative.

It’s possible Hunter would like to put some of this material back in the bottle; he’s welcome to reach out to me and do that or debate the subject more, for sure.

Maybe he was feeling down because his guy got schooled…But c’mon..he went back to the definition of a real fan and suggested that people who didn’t feel like it was $75 well spent should swallow their dissatisfaction because, hey, things don’t always go as planned.

This is “have cake and eat it too” territory; his guy, 3-3 in his last six, after a horrid shoulder injury, got the opportunity and payday of a lifetime. Guys like me, in fact, DID PROMOTE the event because I’m like many of you fans. I like to see the bright side, the upside, traffic in the possible. Part of me gets what Hunter is getting at, that there is too much negativity in media, over all, that “gotcha” stories stir the pot and get hits. He wouldn’t be wrong in saying that…So, I thought maybe Berto could rise above the station in which he’d been over the last couple of years, surprise to the upside. Hunter told us that publicly…Mayweather did…Showtime boss Stephen Espinoza did..Berto did – but he didn’t. Berto failed to surprise. He won maybe two minutes of the 36 total. Sorry I’m not promoting the way you want me to, Virgil, but Berto didn’t do well at all and then, afterward, complained that Floyd ran. Which he didn’t…Anyway, Leonard Ellerbe told us he thought Floyd would get a KO and not even close there…So, yeah, some pockets of people were disappointed, that what they’d been teased with didn’t occur.

And Hunter is really blaming those people and dismissing them as not being true fight fans? REALLY? I sit here and type and shake my head.

Woodsy is on the Twitter all day long at http://twitter.com/Woodsy1069