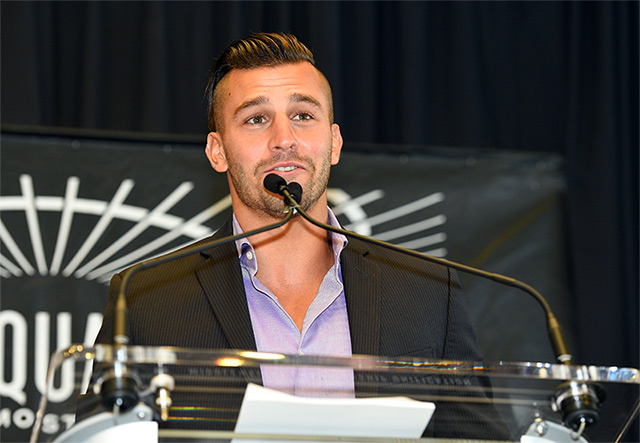 19
Aug
by Doug Fischer
He may have a hipster hair-do, but please do count David Lemieux as a purist at heart…and against catchweights in title shot scenarios.

The Canadian hitter, age 26, was in NYC Tuesday to hype his Oct. 17 HBO/PPV clash against Gennady Golovkin at Madison Square Garde; he chatted with press before the presser kicked off and was relaxed and amiable.

He admitted he first thought, “Already?” when the opportunity to meet Triple G was thrown at him, but then came around, right quick. The difference between him and others who have Ls attached to their foreheads after trying to solve the Golovkin puzzle? “A lot of fighters are scared, I’m not scared of any fighter,” he answered. “I’m not going in there to fight Golovkin, I’m going in there to win against Golovkin! It’s going to be the difference.”

He was asked by Mitch Abramson of the NY Daily News, is he surprised that the Nov. 21 Miguel Cotto vs. Canelo Alvarez “middleweight” fight is being contested at 155 or less.

I was impressed by his demeanor; he was amiable, relaxed, not wide-eyed, or tight. He would have passed a lie detector test, and I think the same could not be said for many a Golovkin foe.

Good start for David Lemieux as we count down to Oct. 17.