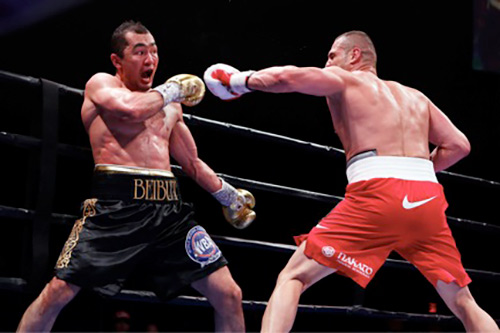 The three judges had the same score: 116-112, or eight rounds to four for Shumenov.

Shumenov (16-2, 10 knockouts) spent much of the fight on his bicycle, stopping to throw punches only in periodic flurries. Meanwhile, Flores (31-2-1, 20 KOs) had difficulty cutting off the ring but landed at least as many punches as the Kazakhstani did.

According to punch stats, Flores outlanded Shumenov in overall punches 117-104 and in power punches 84-62.

The paltry total of overall punches gives you an idea of how uneventful the fight was: 117 and 104 punches translate to only 9.75 and 8.67 per round.

Shumenov was fighting in his first 12-rounder since suffering a split-decision loss – though the “split” part was a surprise to most – to Bernard Hopkins in April of last year. He lost his WBA 175-pound title in that bout.

Flores’ other loss was by unanimous decision against former titleholder Danny Green in 2010.

The fight was for the “interim” WBA 200-pound title, making it an important step toward a legitimate world title.

On the undercard of the Premier Boxing Champions event, featherweight Claudio Marrero finished off Rico Ramos with a left hook at :20 of Round 3. This makes five wins in a row for Marrero since he was outpointed by current titleholder Jesus Cuellar two years ago.