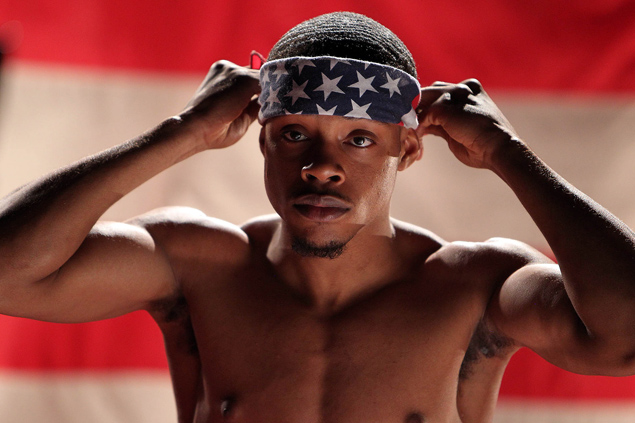 The legend of Errol Spence Jr. has been whispered in boxing circles for quite some time. You may have heard his name tossed around as the guy who was rumored to drop Adrien Broner in a sparring session or the sparring partner who gave Floyd Mayweather a black eye during his preparation for Robert Guerrero. The rumors have lingered without validation or flat out denial for a few years now but it only left people wondering:

“Who is Errol Spence?”

Although the 25-year-old welterweight prospect with a 16-0 record (13 knockouts) has yet to face a name casual boxing fans would know, the 2012 U.S. Olympian is coming into tonight’s PBC on NBC co-main event against Phil Lo Greco with a lot of eyes carefully watching him.

He’s a die-hard boxing fan’s dirty little secret when asked “who’s next?” If you’re a casual fan looking to impress a room full of boxing fans, drop his name and watch what happens. There is no doubt that “The Truth” is special and we will finally get a chance to see him on a major stage when he precedes the Adrien Broner vs. Shawn Porter showdown at the MGM Grand Garden in Las Vegas on free television.

It doesn’t get any better than that for a young fighter. It also doesn’t hurt when the best fighter of this generation is singing his praises to anyone who will listen.

“He’s ready,” Floyd Mayweather Jr. told RingTV.com during Wednesday’s media workout. Boxing’s pound for pound king showed up at the Mayweather Boxing Club early – a rarity for him – just to get a look at Spence’s workout. The smile on Mayweather’s face was one that suggested that he knew what was about to be unleashed to the world on June 20.

And about that black eye Spence supposedly gave Mayweather? Well, the five-division world champion wouldn’t concede to that. But did explain to RingTV.com that it was Spence that helped Mayweather sharpen his blades after his brief prison stint in 2012.

“When I was getting ready for Robert Guerrero, who is a southpaw, the first guy I started looking to spar with was a southpaw and Errol (Spence Jr.) was giving me really good work,” Mayweather explained with extra emphasis on the word “really.” At the time, Spence had only three professional fights but Mayweather liked what he saw out the product out of Dallas, Texas. “He pushed me hard and made me get in tip top condition. And once I was in tip top condition, I was ready and the best I could be. He’s a hell of a fighter.”

Mayweather isn’t the type of person to shower any fighter outside his camp with praise. However, he clearly doesn’t have a problem suggesting that Spence could quite possibly take a seat amongst boxing royalty sooner than later.

“I think his next fight should be against Keith Thurman for a world title,” Mayweather continued. “He’s ready.”

But before Spence can even think about a world title, he has to take care of business on Saturday against Lo Greco, who is a late replacement after Roberto Garcia dropped out of the fight on Wednesday due to “personal reasons” that most believe had to do with his weight. Lo Greco, who had been training with Jamie Vargas not to far away in Mount Charleston, isn’t quite the caliber of fighter as Garcia but carries a 26-1 record with his lone loss to Shawn Porter.

When RingTV.com caught up with Spence on Thursday after a press conference filled with verbal fireworks from the main event fighters, the calm, cool and collected boxer addressed his own growing legend and how difficult it is to not buy into his own hype and look past an opponent most believe he will dominate.

“I’m aware of the stories about me,” the modest Spence said with a grin without confirming or denying anything about those sparring sessions. However, he didn’t exactly shy away from the idea that he’s given both Mayweather and Broner hell inside the ring.

“(Mayweather and Broner) are a little bit more seasoned than me as veterans but when it comes to skills, I’m up to par with both of them,” he continued. “Our sparring sessions are very intense like a real fight.”

Spence says that the most important thing that Mayweather has instilled in him was to take every fight seriously. Although he preferred to showcase his talent against a slugger like Garcia, Spence says he was mentally prepared to face anyone at anytime because a slight misstep can cost you your career.

“I wasn’t surprised about Garcia, that dude has (pulled out of a fight) before with Shawn Porter,” Spence said before turning his attention to Lo Greco. “But I just have to do what I do and put on a spectacular performance so maybe next time I can be on the NBC main event instead of the co main.”

Assuming he gets past Lo Greco, Spence has his sights set on a September return. Which also just so happens to coincide with what should be Floyd Mayweather’s farewell fight. Spence certainly isn’t suggesting this without the knowledge of what could potentially be a huge moment for him.

“What better exposure is there than fighting on Mayweather’s last fight so I can grab some of his fans and bring them over here?” Spence asked rhetorically. As for an opponent, maybe the hard-hitting Keith Thurman will be ready. Spence tells RingTV.com that he’s certainly ready for that kind of step up in competition.

“Coming from him it’s the truth because Floyd doesn’t say stuff he doesn’t mean,” Spence said. “I’m ready for Keith Thurman or anybody else for that matter. I’m not the guy to shy away from anybody. If it gets brought to the table I’m taking it.”

You’ve heard the stories, now it is time for Errol Spence Jr. to prove that he is much more than a myth, he is “The Truth.”