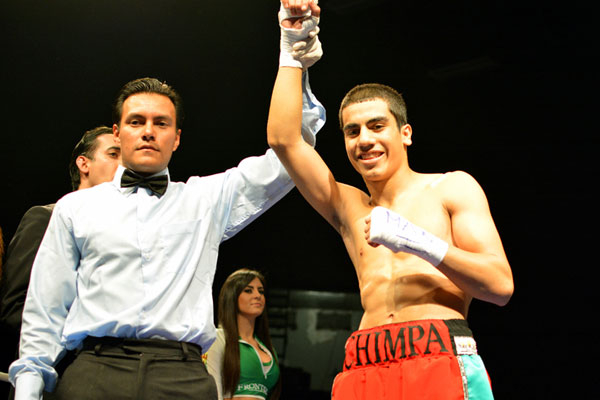 Best night of pro career: Gonzalez feels his win to date is over Julio Sarinana in March. He had to overcome adversity before getting a stoppage in the sixth and final round.

“I think my last fight was a great learning experience for me,” Gonzalez told RingTV.com earlier this week. “It was my first time fighting six rounds.

“I learned from my first seven [fights] that I won from knockout early on in the round. This time I learned much more than all those put together. I got dropped in the second round; I got cut over my left eyelid in the fourth round. It was a crazy night, it was a very tough fight but we were able to pull it off.”

Worst night of pro career: The 19-year-old has won all nine of his fights by knockout. Unsurprisingly he’s happy with how everything has gone so far.

“All my fights have been so far so good,” he said. “We always train to give exciting fights. So far we haven’t had a fight we’re disappointed in.”

“I’m very excited to get back in the ring,” he commented. “We looked at my fight, saw the mistakes, went back to the gym right away and started correcting them little-by-little.”

Why he’s a prospect: Although Gonzalez had minimal amateur experience he was able to learn in other ways.

“As an amateur I always moved all over the place to different gyms,” he explained. “I’m always at different gyms, different sparring. In L.A everyone would know me locally.

“When we would show up for the shows they would know me so it was very rare I would get a fight. I was tired of always getting ready and then not fighting so I was like, ‘Lets go pro’. I turned pro at age 17; that’s why I only had a little amateur career.

“I didn’t have a lot of amateur experience but sparring experience, man, I sparred so many different guys, really good guys, that has given me all my experience from sparring because I haven’t really fought much.”

Los Angeles is a hotbed of gyms and sparring is plentiful.

“I sparred with Abner Mares, Miguel Vazquez, Jhonatan Romero, Joseph Diaz; they all teach you something,” he said. “I was helping “Momo” Romero when he lost his first fight. I have a lot of sparring experience.”

In true Mexican style Gonzalez likes to go to the body. He considers it to be among his best weapons inside the ring: “I like throwing the left bodyshot, which has given me four or five of my victories. We like to practice it a lot.

Why he’s a suspect: Gonzalez is still in the infancy of his career. Though when asked about areas he needs to improve seems wise beyond his years.

“I think you never stop learning in this game,” he said. “I’m only 19 years old; basically I’m learning every fight. My last fight there were numerous errors; we went back to the gym.”

Gonzalez had things his own way for the first eight fights. However, last time out, he was faced with adversity – he was on the canvas and suffered a cut – but reacted positively roaring back to get the win.

“It’s my will to win,” he points out. “I always go in with a winning mentality.

“Me and my older brother, Oscar, always talk before we leave for the arena; we talk about if this happens or that happens – you have to stay calm. My last fight we were in my hotel room and we were talking he said, ‘If he drops you, stay calm, don’t lose your head, if they cut you, relax, stay calm, don’t get paranoid’. My will to win, after I got dropped, never did I think, ‘I’m going to lose.’ I kept going and little by little I broke him down.”

Story lines: He became interested in the sport when he was nearly 13 years old. Boxing was always in his blood. Gonzalez comes from a boxing family; while all his brothers practiced, none of them reached the top except his half brother, Alejandro “Cobrita” Gonzalez who held the WBC featherweight crown in the mid-’90s.

“I kind of grew up watching boxing but I didn’t really like it,” he said. “I played soccer and my older brother, Oscar, he was boxing. I started going to the gym and worked out two days a week and, little-by-little, I said, ‘This is better than soccer.’ So I left soccer and went to boxing.”

He was trained by his “Cobrita” for a year and a half before he went back to Mexico. They remain in touch and big brother gives him advice and pointers.

Gonzalez, who lives with his parents and two brothers has high hopes for the future: “My ultimate goal is to become world champion.”