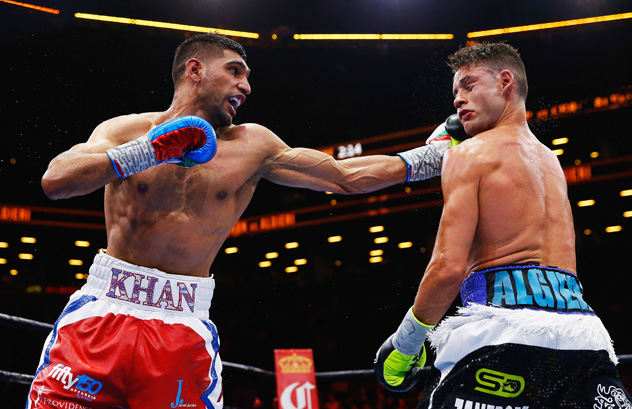 29
May
by Michael Woods 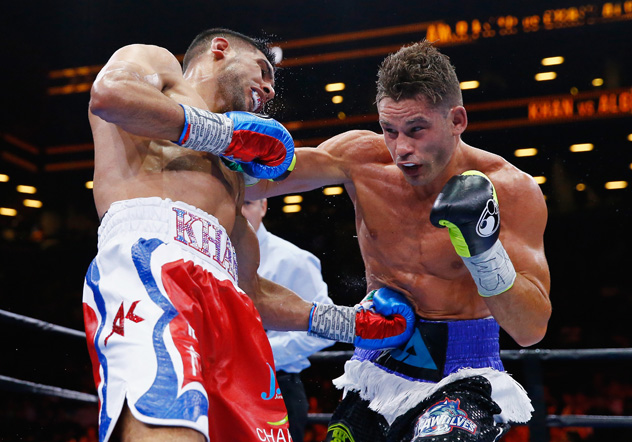 Drama dripped from the rafters at Barclays Center in Brooklyn on Saturday night after a main event saw Amir Khan and Chris Algieri neck and neck through 12 rounds of welterweight action. Those predicting another beatdown at the hands of a star had to eat their words; Algieri was in it to win it, his reflexes and coordination were comparable to Khan’s.

There were no knockdowns and a power punch or two was the difference in many rounds.

The judges saw it 115-113, 117-111, 117-111 for Khan. A roar ensued when the scores were read and it was hard to parse the meaning behind it … but not so the hoots and boos which popped up quickly. Algieri fans, and people who became fans as a result of his top-tier showing, showed their displeasure at the arbiters’ call.

The stakes were unspoken, but clear; a win kept Khan on the inside track to get that lottery ticket guarantee, a date with the “Money” man of boxing, Floyd Mayweather Jr. A loss would make him an impossible sell to “fans” seeking a worthy foe to give Mayweather a test, if not have him taste defeat. For Algieri, a win meant no more cage jokes, and a continued presence on big stages, and collecting fat checks.

Khan, the Brit loved and loathed by the tabloids in the U.K., came in with a 30-3 mark, with 19 knockouts. He has been matched the last few years against non-bomber types, like the New Yorker, who came in 20-1 with just 8 KOs.

The 31-year-old Algieri rooters hoped that the addition of sage John David Jackson to his corner would prove a difference-maker and forestall another situation such as what occurred late last year, when Algieri got knocked around in a loss to Manny Pacquiao.

Team Algieri told us they wanted to target that iffy Khan chin, which Breidis Prescott and Danny Garcia had luck in denting. Ah, but that last stoppage loss came three years ago, and Khan, 28, felt that his defensive shortcomings were attended to by new trainer Virgil Hunter.

In the first, the action was solid. Khan’s combos worked well but a straight right from Algieri got his attention late. The speed and accuracy of Khan’s hands stood out. He did use a couple headlocks to blunt charges, though.

In Round 2, Khan used his feet to set the tone. He kept the distance he wanted, used a jab, some sharp rights, took the round. Algieri edged forward with an aggressive tone but had trouble getting a bead on the clever Brit.

In the third, it was a solid action round. Pressure from Algieri, and counters with both hands, got Amir’s attention. In Round 4, we saw Khan moving forward some, not letting Algieri back him up so much. But the L.I. boxer felt bold; he was able to land some power shots, his reflexes and his coordination matched up well to the Brit’s.

In the fifth, Khan landed and, when he felt like it, grabbed. Khan went down, but it was ruled a slip. The New Yorker wanted to land a home-run right, but had some luck with wide shots to the body. His right eye was scuffed up some by now. 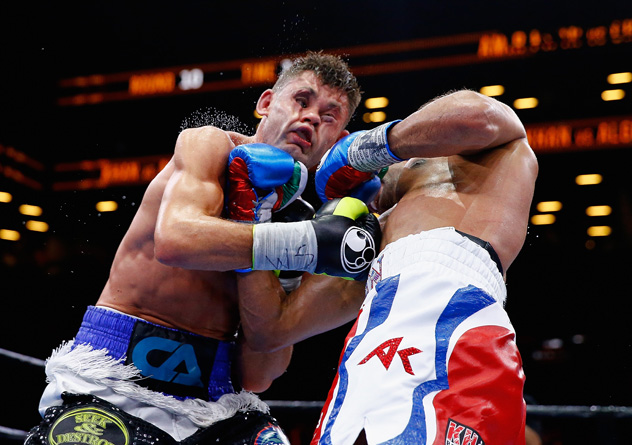 In Round 6, Amir held ground, edged forward. A left hook just missed from Algieri, and he kept the pressure on, though Khan played the slippery eel.

On to Round 7 … Khan used the jab to keep Algieri at bay. He slid left, not worrying about a power right. A wrasslin’ match broke out in the corner. Tight round, neither man pulled away. Another tight one in the eighth – Algieri might have landed two more power punches in the frame. In Round 9, Algieri pressed, looked to time Khan; he wanted that quick right to be a heartbreaker. A Khan flurry had Algieri pointing to him going low. The energy was in the Algieri corner now.

To Round 10 … Algieri scored with a little body work, then he got tagged. He shrugged off a sharp left – whatev! – and got back to pressuring. In the 11th, Khan mostly moved right. NY scored with a left to the body, and trainer JDJ kept on waving him forward. Guess what … another tight round.

In Round 12 the energy was high, the action was close, hard to differentiate. We’d go to the cards.