Provodnikov, Matthysse vow to bring their best on Saturday 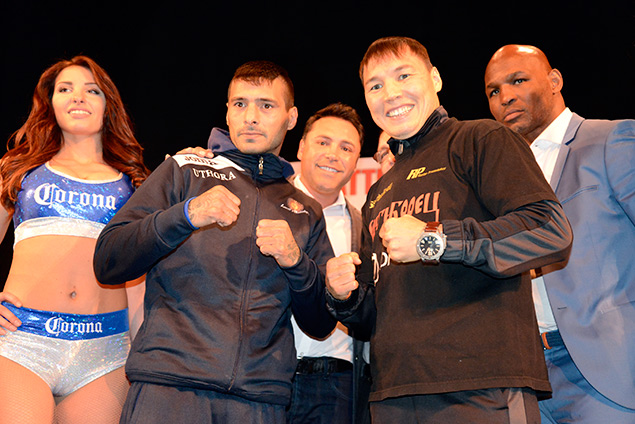 VERONA, N.Y. — The last pre-fight press conference in advance of the much anticipated Ruslan Provodnikov-Lucas Matthysse showdown took place on Thursday at the Turning Stone Resort and Casino in Verona, New York, the site of the HBO “Boxing After Dark” main event on Saturday.

Six-weight champion De La Hoya opened by reflecting on the words he uttered at his induction into the International Boxing Hall of Fame last year.

“I said during my induction, the promoters need to put their differences aside and make the fights that the fans want to see,” he said. “I’m proud to say that Golden Boy is doing that. This fight is a perfect example of such a fight.”

“This fight was easy to make, working with a guy like Artie,” Hopkins said. “Oscar and I did our business in the ring and now we’re on the other side of it, making fights the fans want to see. This fight has an 80 percent chance of being the fight of the year and the winner could be the fighter of the year.”

“It’s not often you see two fighters with records like this facing each other on an undercard,” he said. “These fighters know that if you want to reach the championship level, you have to face tough competition. These are the type of fan friendly fights we want to make. It’s a credit to these fighters for taking a fight like this and stepping up to the plate. “

Matthysse’s Argentine manager/promoter Mario Arano was also thankful for working with Pelullo again. The two worked on opposite sties in 2003 when Pelullo promoted champion Acelino Freitas’ successful defense against Arano’s Jorge Barrios in a knockdown, drag-out war. Arano promised that this time the result will be different. Arano went on to thank Provodnikov for taking this fight against his charge.

As he introduced Matthysse, De La Hoya extolled “La Machina’s” (the machine) ability to adapt and box in addition to utilizing his vaunted power.

For his part, Matthysse was brief.

Before introducing Team Provodnikov, Pelullo elaborated on his familial relationship with Provodnikov from first discovering him in Russia. “I knew this would be a good relationship when I found myself drinking vodka with these guys in the hotel in the morning!”

“When Oscar says something, he knows what he is talking about. This is big. So Ruslan will face one of those guys when he beats Matthysse. Thank you.”

Fellow co-manager Andrei Napolskikh commented, “Ruslan has trained very well. This is the type of fight Ruslan has been waiting for his entire career. That has caused a lot of motivation on both sides so we’re looking forward to a great, great fight.”

Pelullo countered De La Hoya’s praise of Matthysse’s record of fighting in big fights by elaborating on Provodnikov’s wars with Bradley and Alvarado. He then brought Provodnikov to the podium.

“I’d like to thank Golden Boy, Banner Promotions and HBO for making this fight happen,” said Provodnikov, THE RING’s No. 3-rated junior welterweight. “I’ve been hearing from Matthysse’s camp that they’ll knock me out, a couple times a day. I’m glad they’re so sure of themselves. I’m not going to talk so loud because I’m used to doing what I say in the ring. I’m positive that once I’m in the ring, I’m there only to win. I’m going to do everything to win this fight. Nobody or nothing can stop me. My will cannot be broken. No matter what happens, the win is most important and I’m going to do it. Back in history boxers came into the ring for an idea, or for themselves or for the people.

“This is why I fight. I don’t fight for the money or the titles. I’m very glad that this fight is actually happening because I’m fighting one of the best fighters in the division. That makes me motivated and feel like I’m making history. Once I met Bernard Hopkins and he told me I reminded him of Kostya Tszyu. He saw the disappointment on my face. He told me, ‘I know what you mean. Make your own history.’ This is gonna be a great, great fight. It’s not gonna be just another fight but a really exciting fight. I just can’t wait to get in the ring. I wanna wish Lucas and his team a lot of luck. Let the best man win in the ring.”

And with that, there were really no questions from the gathered media. It seems all that’s left to do for the fighters is to get in the ring and throw leather and for the fans- well just sit back and watch the fireworks fly.