Frampton aims to KO Avalos, then go for Quigg and Rigondeaux 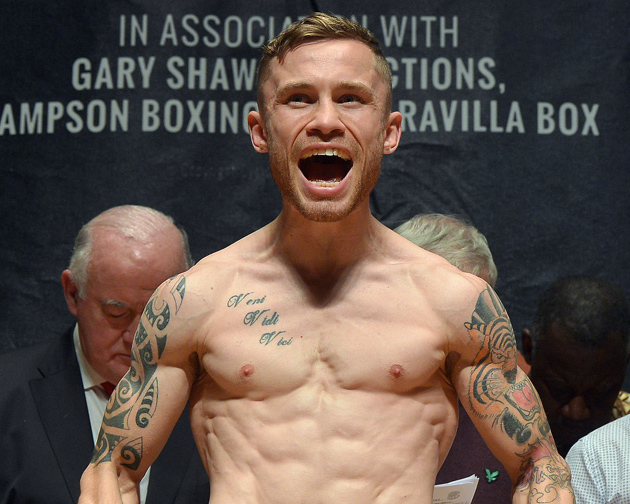 The clich├®d phrase in modern boxing which rubber stamps a fighter’s transition from contender to champion, and Belfast’s Carl Frampton was all ears following a 12-round master class over Spanish slugger Kiko Martinez last September.

“It was unbelievable but I knew I was world champion when the final bell rang,” said Frampton, who defends his IBF junior featherweight title for the first time against mandatory challenger Chris Avalos on Saturday night in his hometown.

“It was such a massive relief because the fans were positive that I would win that fight because I’d beaten Kiko before. I’ve dreamed of that moment since I was a pup and it was a great night for me and all the fans.”

Rated No. 1 at 122 pounds behind THE RING champion Guillermo Rigondeaux, Frampton is 28 years old and approaching his prime years. He is unbeaten (19-0, 13 knockouts) and his dream win over Martinez has only strengthened his work ethic and increased his desire.

Frampton said, “In sparring, I would normally do nine rounds with a solid operator and then three with a fighter my own weight, perhaps an amateur, or just someone to move around with. For this fight I’ve sparred top caliber fighters, who are heavier than me, for all 12.

“We’ve been working with two excellent Mexicans, one of them unbeaten in 28 fights, as well as Yvan Mendy who is the French lightweight champion. That’s stiff opposition right there and I blasted right through them. I’m flying at the moment and getting better all the time.”

So, the first opponent to test out an improving Carl Frampton will be the 25-year-old Avalos (25-2, 19 knockouts) and this precocious young American seems to have lit a fire under the defending titleholder.

“As a fighter Avalos is game, aggressive and confident,” said Frampton, with an air of disdain. “As a person he’s brash, arrogant, cocky, and thinks he can beat the world.

“He talked crap at a press conference, which was strange because Avalos has lost twice to lesser opponents than me (split decisions to Christopher Martin and Jhonatan Romero). The fight will be TV friendly but it doesn’t take a scientist to work out what’s going to happen here.

“It will be exciting while it lasts.”

Known as “The Jackal,” Frampton would be best described as a versatile boxer puncher. He seems to morph effortlessly between styles and can be as cute on the defensive as he is devastating with his proven punching power. Martinez couldn’t get near him, and Avalos’ brawling style could also be made to order.

“Avalos is like Kiko in that he’s aggressive but he’s taller, walks in straight lines, and keeps his chin in the air so he’ll be easier to hit,” said Frampton, with ominous intent.

“I think he’ll come forward and, without giving away the game plan, I will deal with whatever he’s got. If I hit him hard in the first round and I see an opportunity to take him out then I won’t hesitate.

Frampton continued, “It simply doesn’t matter what he brings to the table because I believe I’m the better fighter. I’m focused, solely, on my own performance because if I turn up at 100 percent then I win on the night.”

Bad news for Avalos but there is great news for sports fans across the UK and Ireland. Shortly after American boxing mogul Al Haymon had secured a stream of terrestrial television dates, with CBS and NBC, it was announced that Frampton vs. Avalos would also be shown domestically on free to air TV.

Considering the deciduous state of big time boxing on terrestrial television in the UK, this deal was a huge accomplishment for Barry McGuigan, the former WBA featherweight champion, Frampton’s manager, and the CEO of Cyclone Promotions.

“Fighting on a free television channel like ITV is just massive,” agreed Frampton. “Me, as champion, and all the fighters on the undercard are getting so much exposure here. It is also a huge deal for the sport in general, so it’s really important that we put on an exciting show.

“We want this to be a good event, with competitive undercard fights, and we want it to look the part on television. I think we’ll accomplish that and boxing deserves it because there’s no better sporting event than an evenly matched fight.”

Frampton was reticent to mention the kind of numbers he could generate in terms of viewership but was only too happy to discuss future plans, should he make Avalos a memory on Feb. 28.

“I would like to fight (Scott) Quigg in the summer and then I want Guillermo Rigondeaux,” said Frampton immediately. “Rigo is the best fighter in the division and to call yourself the best you have to beat the best.

“Quigg is an obvious target because there are harder fights out there for less money and then we can go after the top dogs in the division. I believe I’m the only 122-pound fighter in the world who can beat Rigondeaux and that’s a fight I definitely want.

Frampton continued, “Leo Santa Cruz won’t fight me because he’ll remain protected as he has been in his previous three or four title defenses, beating up sparring partners.”

So Avalos is unlikely to receive a polite reception from either the Belfast faithful or their favorite son, and the man of the moment was very quick to give his prediction on what he sees transpiring.

“I believe that I can knock Avalos out,” said Frampton. “If I hit him clean then it’s game over.”

Frampton vs Avalos will be screened live and exclusively on ITV on Saturday the 28th of February. The undercard plus build up coverage will be shown live on ITV4. AWE in the US will also carry the main event.