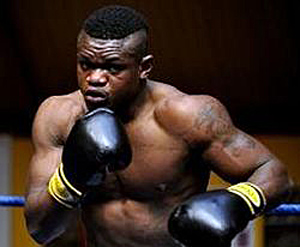 Once-beaten RING No. 9-rated cruiserweight Youri Kalenga will face No. 3-rated WBA beltholder Denis Lebedev on March 21 at a site to be determined, according to a release from Kalenga’s promoter, Michael King of King Sports.

A 26-year-old winner of five straight fights, four by knockout, Kalenga (21-1, 14 knockouts) is on his way to Big Bear Lake, California, where he will begin his first training camp with Abel Sanchez at the Summit High Altitude Training Center.

“This is an outstanding opportunity for Youri and as we do with all our fighters and that is to ensure them the best preparation to succeed,” said King. “Abel is one of the premier trainers in the sport and we’re very confident Youri can beat Lebedev with [Sanchez] in his corner.”

A native of Congo now residing in France, Kalenga has traveled the globe throughout his five-year career with wins in Germany, Canada, Monaco, Ireland and Spain in addition to his home country.

Kalenga was last in action for a 12th round technical knockout victory over previously undefeated Denton Daley in November, representing his fifth win since losing a unanimous decision to Arturs Kulikauskis in Sept. 2013.

“We put Kalenga in a tough fight…because we had analyzed Daley’s strengths and weaknesses and believe [Kalenga] would come out victorious. Many boxing people said we were being reckless as there was nothing to gain fighting Daley and everything to lose…as we would have lost…our mandatory fight with Lebedev for the world title. But we strongly believe in our 21st Century training program and believed Kalenga would win. Additionally, our philosophy at King Sports is to continue challenging our fighters along with preparing them for a specific boxer,” said King.

“So this wasn’t just a tune-up. Daley was ranked No. 2 by the WBA and we fought him on his home turf in Canada. While it may not have appeared we had anything to again, we did as we believed if Kalenga couldn’t beat Daley with our 21st century training program then he couldn’t beat Lebedev and we aren’t going to baby our fighters. If we are going to succeed, we have to fight the best – just like Sugar Ray Leonard and Muhammad Ali. Kalenga’s first defense showed everyone he’s the real deal and can become a great champion that can unify all the titles.”