Peter Quillin: ‘I’m just coming to take my title back’ 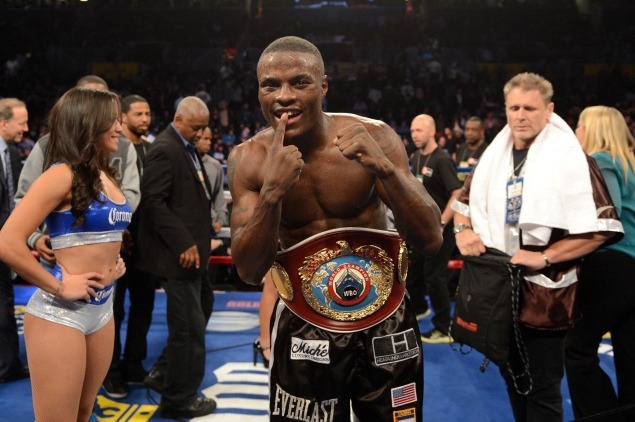 RING No. 2-rated middleweight Peter Quillin confirmed that a deal has been reached for him to face RING No. 7-rated WBO titleholder Andy Lee for the belt Quillin vacated in September rather than face then-beltholder Matt Korobov.

“Not taking away from what Lee has accomplished in his career,” said Quillin, “but I’m just coming to take my title back.”

Although the date and venue were not confirmed, Lee-Quillin reportedly could support a 143-pound clash between RING junior welterweight champion Danny Garcia and No. 2-rated IBF titleholder Lamont Peterson on April 11 likely at Barclays Center in Brooklyn.

Lee, 30, is coming off November’s sixth-round technical knockout over the previously undefeated Korobov for the vacant title. The win represents Lee’s sixth in a row in a run that has included four stoppages since being knocked out in the seventh round by Julio Cesar Chavez Jr. in June 2012.

Quillin stood to make a career-high $1.4 million for a defense against Korobov, which he turned down.

“Just to let you all know, I’m in a better position in my boxing. Get winner and a 6-figure number to let the fight happen. And if I didn’t step aside, Andy lee was vacating his world title,” said Saunders, 25.

“I want to fight a champion. Not for vacant belt…My next fight will be in the states…Loving all the banter I’m 25 in a good position in my boxing career my time is near but I also do what’s best for my own blood.”

Saunders is coming off November’s split decision victory over previously undefeated Chris Eubank Jr., representing his fourth consecutive win over an unbeaten fighter. Eubank had followed unanimous decisions over Gary O’Sullivan and John Ryder in July and Sept. 2013, respectively, as well as an eighth-round knockout of Emanuele Blandamura last July.